The Witcher 2 is an ambitious game that doesnt quite meet its own high standards. Thats an important thing to keep in mind throughout its 20 or 30 hours of play time. There are occasions when The Witcher 2 feels like the greatest RPG of the current generation, and others when it feels like a crushing disappointment, abjectly ruined by shabby design decisions and ludicrous technical hiccups. The truth, however, lies somewhere in between.

Its the sequel to CD Projekts 2007 debut, based on a series of short stories by Andrzej Sapkowski. The Witcher was a commendable effort - flawed in a great many ways, but still engrossing, and still able to demonstrate a deep understanding of how roleplaying games work. In it, you played as Geralt - a monster slayer known as a witcher - whod lost his memory after a savage attack.

The Witcher 2 continues the first games amnesia theme, although this time around its largely relegated to an ongoing sub-plot in which Geralt attempts to rescue memories of the time before the first games events. The bulk of the main quest instead involves a hunt for the Kings murderer - a giant beast of a man whos framed Geralt for the assassination. 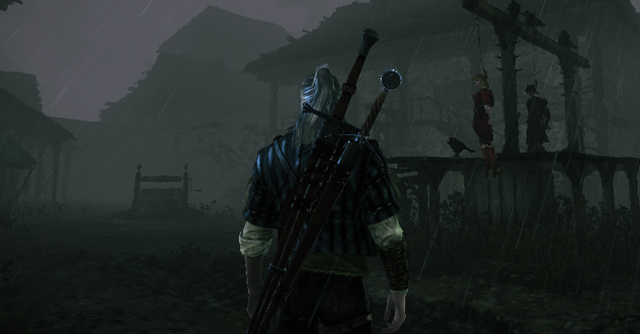 Your search begins in the town of Flotsam - a typical fantasy settlement, but one where things have gone awry. You arrive to the scene of an execution of four townspeople - two of whom you know to be innocent. The towns leader slurs hateful words to the rowdy rabble of an audience, one filled with thugs and prostitutes. Nearby, non-humans are relegated to their own shabby part of the town. Flotsams leader is stubbornly prejudiced, convinced that the non-humans will take up arms against his people when the time comes.

The Witchers world is a dark one. Flotsam itself is largely a safe place, though its anything but welcoming. Theres tension here. As you stand in the towns square while crows gather around two corpses hanging by the neck from the gallows, you certainly feel it.

This is often a tremendously atmospheric game, helped in large by CD Projekts spectacular RED Engine. On its highest settings it truly is a sight to behold, creating one of the most visually beautiful games weve ever seen - but even with the detail scaled back, the art design holds its own. The engine is capable of rendering enormous, majestic battles, and vistas that stretch far into the distance. But its also capable of capturing the nuance of a particular moment - something far too few games manage.

Its these moments - a tender glance between characters, a drunken party around a campfire, or the ominous sight of men and women hanging from nooses - that showcase The Witcher 2 at its best. These, and the often excellent combat. Dropping the original games light and heavy fighting stances, its two-button attack setup allows for fluid change between small and large blows. Additionally, it encourages more creative battle techniques, asking you to dodge and parry incoming attacks, as well as employing a selection of spells with which to fend off your foes.

When this works, it makes for some tense, invigorating sequences as you engage in a knife-edge battle for control. There are problems, though. The first is that The Witcher 2 is sometimes just too bloody hard, with some early fights taking five or ten attempts on anything but the lowest difficulty setting. Switch down to easy, as you can do at any point, and youre left with the opposite problem: you can win most battles by buffing with a defensive spell, then hammering the left and right mouse buttons until everyone around you has crimson goo spilling from their insides.

The difficulty curve is all wrong, too. This is one of a very special few games that manages to get easier the further you progress into it. After the first few hours your skill tree opens up, and suddenly, with each level, youre an increasingly formidable opponent. Yet your enemies never quite scale up in the same way, meaning that by midway through Chapter 2 the difficulty problems have largely ironed themselves out. Its a relief when that happens, but it really should have been the difficulty of the opening that was addressed, not that of the rest of the game. 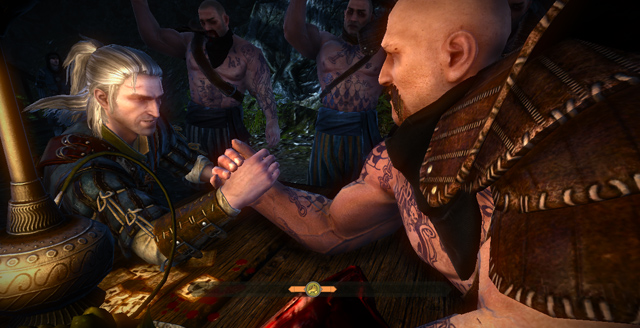 The second issue is that, for a system thats so clearly about rhythm and timing, its enormously frustrating that certain animations have to play out before you can commit to your next swing. Most problematic is that this often happens when directly under attack: when Geralt is struck, he sways backwards, fully exposed for a second or two. When a whole wave of enemies is closing in, this is often impossible to recover from.

In fact, lets talk about the animations. They really do enjoy playing out in full before youre allowed to do anything. Want to walk through a door when accompanied by a friendly NPC? Tough - you cant, until theyve opened the door, walked through it themselves, and then closed it behind them. This happens so frequently during the game that, after ten hours or so, Id grown past being frustrated and had settled into a state of utterly dejected acceptance.

Also, for every marvelously rendered cut-scene or set-piece, theres something ridiculous like a prostitute hovering on the spot in an idle position - or, on one particularly hilarious occasion, Geralt fearsomely readying his sword, despite the fact that there was no sword in sight. The witcher was left firmly grasping thin air, ready to beat the living hell out of a giant monster with it.

That moment emerged as part of a larger issue in which I managed, for a while, to completely break the game. Id had to leave my weapons with a guard in order to enter a certain area of Flotsam, and when I returned, despite an NPC prompting me to collect my weapons, Id forgotten to do so - or, perhaps, not realised I had to do it manually. I then attempted to get on with the game, but the game had other ideas.

Instead of simply stopping me from progressing at all, The Witcher 2 continued, allowing me to push on with the main quest, but with various things not quite working. Cut-scenes became unskippable. Character models vanished into the void, despite playing a crucial part in the conversation in progress. Geralt attempted to wield thin air instead of a sword in that cut-scene preceding a boss fight, and, most ruinously, the save feature stopped working. The result was that I lost a good half-hours worth of progress, twice, before I realised what was going on.

Certainly it was my misunderstanding of the games commands which led to this nonsense, but it was The Witcher 2 that allowed me to press on anyway, and then simply could not handle it when I did. This is a point that CD Projekt might have liked to address, given that the game is seemingly on a mission to provide as little important information as possible, especially in what is laughably called its tutorial.

In fact, Id go as far as to say the majority of the games opening act is a fairly serious misstep. It has its moments, of course, but add pacing issues to the list of problems. The Witcher made this mistake as well, shoving an end goal in plain sight but preventing you from reaching it for as long as possible, wildly overstepping the line of intrigue and straying towards tedium. In its sequel, the first task in your main quest is - essentially - to busy yourself for several hours until an important character finally finds the time to speak with you. 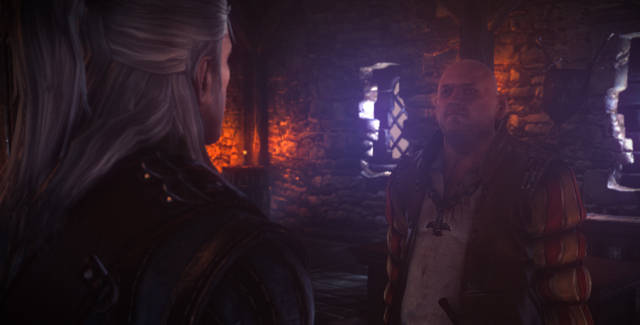 And so, with this list of fairly significant flaws, its easy to overlook the fact that whats beneath them is an engrossing game - one that understands why the genre was traditionally popular, but also why its been streamlined for todays audience.

The setting is generic, but theres a whole load of complexity to the storytelling. Perhaps too much at times, as it can get confusing, but the narrative scope on offer is impressive. The writing is decent, characters are well-rounded, and despite working on a skill-tree system rather than more traditional experience points, theres a real sense of progression as you fight through the many hours of your journey. Theres even a well-managed sex scene, which certainly makes the original games ridiculous porn cards look like the sexist drivel that they were. It feels natural, and human, and never gratuitous despite being fairly explicit.

The second chapter ramps up the excitement, and those who persevere past the game's lacklustre opening third will find their patience rewarded quite handsomely. It follows a frustrating choice that asks you to side with either an obnoxious, prejudiced oaf of a man or a band of terrorists who keep trying to kill you, which feels like a misguided attempt to force a Difficult Moral Decision on the player. But to The Witcher 2s credit, it has the courage to follow through with its promises more than perhaps any other large-scale game around, sending the story off in contrasting directions and making you deal with the consequences of whichever path you took.

If you can look past the balancing, pacing and technical issues, there is an extremely solid RPG here - nothing especially innovative, but definitely a game that sets out to be the most absorbing, rich and spectacular experience it possibly can be. Its a disappointment because it largely succeeds in that goal while fluffing the basics. The best RPG of the current generation? With a bit more care, it could have been.