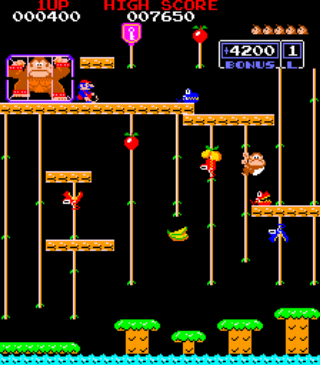 Donkey Kong  a tough act to follow. Dear old dad stole the girl and the show in the golden age classic, thwarted by red-capped crusaders the world round as the reputation of Nintendo soared like its players to the top of its 100-meter ascent. Unfortunately his mischief meant payback: his keeper Mario again locked him away, re-caging the gorilla having never learned his lesson. Such are the events introducing Donkey Kong Junior, where his next of kin embarks out of the jungle to bring his toothy papa back home, and where Nintendo seeks to prove its early success was no one-hit wonder.

Being cast in the shadow of a classic is never easy; while Ms. Pac-Man won over hearts, plenty of follow-ups to early hits fell by the wayside to become footnotes in history. Few remember Space Invaders II and Asteroids Deluxe, more colorful iterations rushed to arcades that didn't deviate. Missile Command II was never released. Frogger II was console only, thankfully, and while BurgerTime conjures up images of trampling meat, Peter Pepper's Ice Cream Factory probably doesn't ring a bell. Gaplus, Millipede, Frenzy, Q*bert's Qubes... fine-tuning one success into another was not an enviable task in the early days of arcade gaming.

But you've heard of Donkey Kong Junior, and not just because of its secondary status in gaming history. You know its name because of its then-unheard of role reversal, former hero Mario now playfully cast as the villain. You hear it mentioned amongst the classics because it introduced new and unique adventure elements, its once one-of-a-kind obstacles and its imaginative takes on setting as captivating as any peer. And with all respects to Ms. Pac-Man, you've heard of Donkey Kong Junior because it is perhaps the first great sequel to advance the original concept, cleverly reworking the formula while at the same time feeling immediately familiar to dedicated Donkey Kong players.

The adventure begins upon a flat-topped acacia tree submerged in a stream, the next in the series of platforms treacherously out of reach. Its first moment defines the new adventure: the young Kong will instinctively jump and climb the dangling vines suspended from a platform, avoiding sporadic snapjaws diving for his fingers to make his way onto a midair island. From there he can grasp another vine and drop down to the next acacia, then proceed to hop across the treetops, where another series of vines will take him to the utmost reaches. There, the first key to unlocking his father's cage awaits. 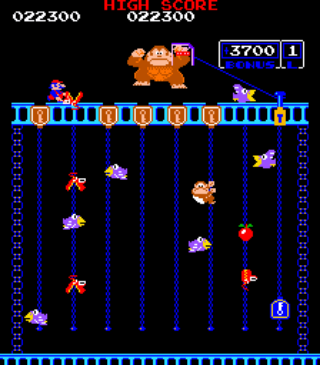 There are interesting nuances to observe. Blue snapjaws will spawn from Mario's whip and shoot straight down the tendrils into the waters below, while their smarter red counterparts will rebound at the end of the line and climb back up, continuing to meander and stalling the path to success. Fruits hang midair and can be bumped off the vine, falling upon the heads of unobservant foes for bonus points. And Donkey Kong Junior's clever climbing subtleties too often go unnoticed, the ape able to grab a vine in each hand to scurry skyward faster, while utilizing a single vine will slow his ascent but allow him to drop out of harm's way more quickly. Crafty players will utilize both to proceed with celerity.

The following level depends on the version of Donkey Kong Junior you're playing: its first American release mimics the level pattern of the original, transitioning to the final stage with successful rounds introducing new levels in between, while the easy type version moves though all four in the familiar, successive order. While this may seem like the biggest difference, the more significant change might be that easy-type has quicker transitions swinging between vines, allowing the young ape to escape danger more quickly and not nearly as demanding of the player's ability to foresee trouble.

The final stage is hectic and especially challenging as the round numbers increase, requiring six keys suspended from blue chains be pushed skyward to their locks, freeing the father ape from Mario's cage. There are eight chains total to maneuver between and a platform at their base, but even that area becomes unsafe after your first trip through. Red snapjaws move up and down the cables, forcing you to dodge as they break towards the bottom while slowing your progress as they clamber back to the top. Purple birds, dubbed nitpickers, are sicked on you by Mario, zigzagging their way downward in an S-pattern, no two streaking by on the same horizontal plain. The longer your stay lasts the more the playing field veers toward randomness, creating a frenzied scene that encourages the daring moves more likely to mean your demise. 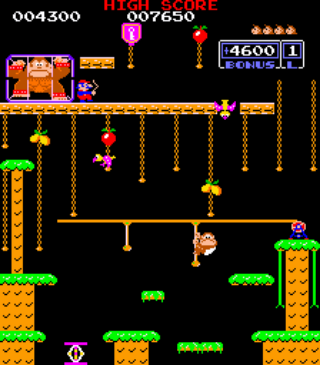 In contrast to the finale's action are the middle two levels' paced and clever obstacle sets, which require practice and timing to master. The springboard jump in the jungle stage is easy, but when leaping onto the next moving platform be sure not to bump your head. It's followed by a test of patience: nitpickers drop eggs from above while the two retracting hooks of a conveyor belt and one floating platform are your only means to acrobat left across the screen. After that you'll have to make your way all the way to the right again  Donkey Kong Junior incredibly adept at making full use of its single screens  with the nitpickers from before now flying head on as you move from chain to chain. For the final stretch you'll have to time your jumps and again avoid the birds to reach the next key.

The third level surprises with its bizarre color scheme of hot pink and purple and the high-pitched, short frequency blips and beeps that form a distracting melody best described as music for robots. Electrical charges circle long platforms clockwise and counter-clockwise, the blue ones Mario commands dropping down to the platforms below via clearly marked channels. If it doesn't sound particularly enticing or ingenious it's because this is the low point of the Donkey Kong Junior experience, or rather was made to be. In the harder version of DK Junior it was a segment especially tough to reach  two and a half successful rounds under more stringent physics  and noteworthy for its offbeat novelty. Placed in the regular series of levels it is awkwardly out of place, with no explanation for the setting it represents and its simple patterns evident and easy to conquer.

So no, Donkey Kong Junior is not the success the original was  those levels were classics in any order, those sound effects were accentuating and unforgettable while these are sparse and insignificant, and that game paved the way while this merely helped cement a legacy. But taken in context  the unrivaled success the original was, the forgotten and often redundant games that succeeded such hits in the early arcades  Donkey Kong Junior both exceeded the standard, forged its own unique adventure and earned its well-deserved status as an early arcade classic. It is more challenging. Its obstacles are at times more creative, at others more hectic. It turns about the concept of the original to make the climbing segments the more jeopardous. And while it is not as seamless or as balanced, its placing of daddy Donkey Kong in a cage is not merely a plot device but also symbolic:

Nobody puts Donkey Kong Junior in a corner.

If you enjoyed this Donkey Kong Junior review, you're encouraged to discuss it with the author and with other members of the site's community. If you don't already have an HonestGamers account, you can sign up for one in a snap. Thank you for reading!

© 1998 - 2022 HonestGamers
None of the material contained within this site may be reproduced in any conceivable fashion without permission from the author(s) of said material. This site is not sponsored or endorsed by Nintendo, Sega, Sony, Microsoft, or any other such party. Donkey Kong Junior is a registered trademark of its copyright holder. This site makes no claim to Donkey Kong Junior, its characters, screenshots, artwork, music, or any intellectual property contained within. Opinions expressed on this site do not necessarily represent the opinion of site staff or sponsors. Staff and freelance reviews are typically written based on time spent with a retail review copy or review key for the game that is provided by its publisher.