I would LOVE to take the easy way out and simply describe Thunder Force as the humble beginnings of a prolific shooter series, but I won't for two reasons.

First, because that is a generic cop-out. One could easily state that ANY series that has existed over multiple generations of gaming systems came from "humble beginnings". Is it actually making a point or simply stating the obvious to say, for example, that The Legend of Zelda was the humble beginnings to a franchise that boasts beloved games on pretty much every system with Nintendo's name attached to it? As time has progressed, graphics and sound have greatly improved with each generation; while controls have become more sophisticated in order to give players more commands they can easily issue. Thunder Force is a 1983 game that started a series that was still going strong as of 2008, with the PlayStation 2's Thunder Force VI. The only reaction that calling it the "humble beginnings" of the series should elicit is a hearty slap to the forehead combined with an exasperated "DUHHH!!!".

Second, and possibly more importantly, because that description is, to be frank, a huge understatement. The Thunder Force series became a hot commodity to shmup fans during the era of the Sega Genesis because they (well, at least III and IV) were among the most fun of that era to play. The original wasn't on the Genesis. Or the Sega Master System. Or a rival 8- or 16-bit console. Or anywhere in America. Or even on a big-name Japanese system that would cause a shooter connoisseur to deliver a hearty slap to his forehead combined with an exasperated "Of course...why didn't I think to look for it there...".

Thunder Force was initially released on the Japanese Sharp X1 computer before being ported to a few other Sharp and NEC products. To illustrate how important the X1 was in the grand scheme of things, its data was added to this site just so this review could be written. The thing about Thunder Force is that the only people who'd recognize it as part of its series would be those who played II and remember the dull overhead levels that were scrapped immediately after that game. I remembered them, which meant that mere moments after I started playing, I found myself delivering a hearty slap to my forehead combined with an exasperated "Why do I let myself get suckered into these things?!?".

For those more fortunate than I, let me give you a brief tutorial as to what you'll be facing. As stated previously, you'll be looking at things from above. Your ship moves constantly  your input is simply to determine what direction it's moving in at any given time. Making all this movement a bit tricky are the enemies, who tend to constantly swarm your ship as you aimlessly work through each level attempting to figure out exactly what you have to do in order to make it to the next. Thunder Force was essentially a stripped-down version of my least favorite part of my least favorite Genesis game in this series. 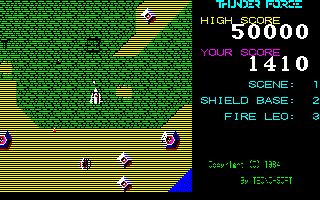 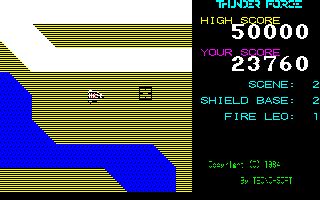 The game lures you in with a digitalized attempt to blurt its title. Sure, it sucked, but in a fun way. Any long-time gamer remembers when programmers first started attempting to insert the spoken word into their creations. The results were often comical. Hell, I give Technosoft credit  I could actually make out the words "thunder" and "force"!

For me, that bemused chuckle was the high point, as it all went downhill from there. Your ship follows the Xevious standard, only giving you a regular shot and bombs. The standard attack really is more of a support tool to handle airborne distractions, as the point of each level is to bomb ground targets in order to find and destroy shield generators so a big fortress will appear. You then destroy a part of that thing, move to the next level and do it all over again.

After thinking about things at a level more insightful than "I didn't like TF 2's overhead levels and I don't like these either!", I figured out the main problem with Thunder Force probably is its speed. I thought the Atari 7800's version of Xevious was painfully slow, but I'd rather deal with it than the faster pace of the action here. We're not dealing with cutting-edge graphics and state-of-the-art systems here. This is an ancient computer game with a lot of little blocky things zipping through the air on a small screen (due to about 40 percent of it being taken by a menu including things like your score and how many lives you have remaining). I tended at being quite proficient at dying mainly because I'd be cruising along and then get eradicated by some small thing colliding with me before I could get out of the way. Look at the leftmost screenshot of the two located a couple paragraphs above this. About where the green forest area is turning into the brown ground area, alert eyes might detect a microscopic red thing. That's the sort of thing you'll have to constantly avoid while bombing all those little structures on the ground.

I doubt I'd have enjoyed Thunder Force overly much under any circumstance, but I could have at least appreciated it for being part of shooter history if not for that. I mean, LOOK AT THOSE SCREENSHOTS! Individual numbers of both your score and the high score are larger than your ship. A huge portion of the screen is essentially wasted space. And you're moving at a reasonably high rate of speed while tiny red dots are closing in on you. Slow things down and I could have a bit more time to react to things. Make the game cover more of the screen and I'd also have a bit more time to react. Instead, I'd go through hilarious moments where I'd feel like I was finally getting the hang of things...and then lose two or three lives in quick succession.

The real kick in the pants is that I've probably felt similar moments of frustration with virtually ever shmup I've played, including the superior Genesis Thunder Force games. "Whoa, that thing moved too fast!" "Man, I just can't dodge those tiny bullets!" The difference is that in those games, there were moments of reward that erased those frustrations and invigorated me to keep playing no matter how much my thumb was starting to hurt. Beating behemoth bosses or just making it to a checkpoint oftentimes were reason for celebration. It didn't matter that I had been endlessly griping about how "cheap" a boss or level was...when I finally prevailed, all was right with the world! Thunder Force doesn't have that. It's just a bad game where you do the same things over and over again  much like ending three straight paragraphs in a review with a line about slapping a forehead with exasperation; something this game will cause you to do.

If you enjoyed this Thunder Force review, you're encouraged to discuss it with the author and with other members of the site's community. If you don't already have an HonestGamers account, you can sign up for one in a snap. Thank you for reading!

© 1998 - 2022 HonestGamers
None of the material contained within this site may be reproduced in any conceivable fashion without permission from the author(s) of said material. This site is not sponsored or endorsed by Nintendo, Sega, Sony, Microsoft, or any other such party. Thunder Force is a registered trademark of its copyright holder. This site makes no claim to Thunder Force, its characters, screenshots, artwork, music, or any intellectual property contained within. Opinions expressed on this site do not necessarily represent the opinion of site staff or sponsors. Staff and freelance reviews are typically written based on time spent with a retail review copy or review key for the game that is provided by its publisher.