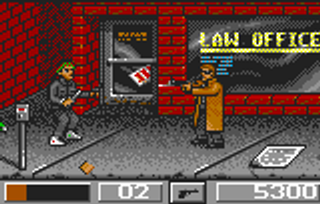 Dirty Larry is another bad Lynx game -- you may be noticing a trend already. Its primarily influence goes without saying, but just in case its clever title didn't hit you like a sack of bricks, it opens with renegade cop Larry being chastised by his boss for ruining yet another police cruiser. Poor Larry. No one respects his unorthodox, self-destrucive style. These segments, however cliched, are the highlight of this adventure, in that all the text is spelled correctly. Most beat 'em ups don't get that right, even though I can't think of one with a syndicate boss as poorly named as Mr. Big.

While its lead character has thrown the book out the window, the developers did not. Dirty Larry attempts to mix fisticuffs with gunplay, but both are executed so horribly there is little redeeming value. Fighting with fists is a pointless endeavor as Larry's short reach requires him to be right on top of his adversaries, who don't even react to your punches but will keep pummeling the gumshoe. Confined to a purely vertical plane, some clever opponents -- baseball bat swinging clowns -- will walk directly through you. Being at point blank range does not deter the most common henchman from firing his pistol, only providing him the secondary option to cut at you with his knife. If you never saw someone walk at you holding a gun in one hand and a knife in the other, you should play Dirty Larry, because it looks plenty ridiculous.

Pull out your gun and save the struggling hand-to-hand moments for the hopefully few intervals when Larry is without ammunition. The action becomes tolerable but not much better. That aforesaid common henchman will fire almost immediately upon entering the screen, and takes two shots to down, so you'll have to dodge a bullet. Maybe you'll try ducking, except that tactful maneuver puts Larry's cranium directly in the crosshairs. Brilliant. Unlike in much better games, like Rolling Thunder, ducking provides no advantage whatsoever. Instead you're going to have to jump over bullets.

Or just take the damage, as Larry will jump his height, and by the time he lands with both feet on the ground that same competitor and possibly another will be directly upon him.

There are men on motorcycles whose attack is to drive right through you -- Larry will not fall down of course, as falling down requires animation. There are burly mamas whipping metal chains and grunge heads doused in gas that light a match and go up in smoke in seconds. Level three and thereafter will produce musclebound skinheads that require four bullets to down, and shooting them directly in the chest will not phase them in the slightest. It doesn't seem possible to escape damage when they are on the screen, walking up to you and executing mechanical kicks and punches.

Like Kung Food, Dirty Larry compensates with enough health that you can get lucky and progress through much of the game. Both are examples of games that are fundamentally poor and have used above average size lifebars to try to hide the damning facts, that hits on opponents often don't register and situations they create incur unavoidable damage on the player. Both are barebones concept games with zero creativity after the initial concept and failed execution throughout.

Dirty Larry is recommended if your only system is the Atari Lynx and you can't find Kung Food.

If you enjoyed this Dirty Larry: Renegade Cop review, you're encouraged to discuss it with the author and with other members of the site's community. If you don't already have an HonestGamers account, you can sign up for one in a snap. Thank you for reading!

© 1998 - 2022 HonestGamers
None of the material contained within this site may be reproduced in any conceivable fashion without permission from the author(s) of said material. This site is not sponsored or endorsed by Nintendo, Sega, Sony, Microsoft, or any other such party. Dirty Larry: Renegade Cop is a registered trademark of its copyright holder. This site makes no claim to Dirty Larry: Renegade Cop, its characters, screenshots, artwork, music, or any intellectual property contained within. Opinions expressed on this site do not necessarily represent the opinion of site staff or sponsors. Staff and freelance reviews are typically written based on time spent with a retail review copy or review key for the game that is provided by its publisher.