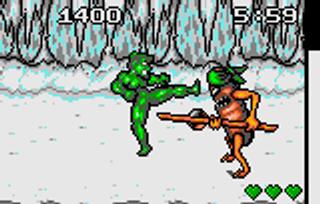 My friend inkhands once summarized, on the subject of Double Dragon, "kick, kick, punch, punch, die." In the game Kung Food you will kick, and you will punch, and the lumbering hero you control that bears more than a minor resemblance to the Jolly Green Giant will die. Many enemies will fall before him. Some will be tomatoes that roll across the screen, then roll back across the screen, then reveal their true selves as toothy squat competitors Jolly Green must duck to kick. Some will be be celery, and some will be kendo stick swinging sausage links, and some will be amorphous green blobs of mold. But you'll be tasked with kicking them, and punching them, until death parts the wayward Jolly Green and the animated army of foodstuffs overrunning this kitchen of depravity.

My friend Fix once argued, on the subject of Streets of Rage II, "beat-em-ups are rarely completely logical, and often pretty weird, but that doesnt mean that its a grand idea to throw in a PLANT at the end of the THEME PARK, just after the PIRATE SHIP." In Kung Food you'll begin in the FREEZER, progress to the FRIDGE, make your way across the FLOOR to the CUPBOARD, until you finally reach the SINK. I suppose it is coherent, but there are few grand ideas. Buried stalagmites marked by indecipherable dots will cause headaches, shooting up from the ground in an icebox in serious need of defrosting. Deadly carrots will funnel out of cocoon-like chambers -- I don't know what they are supposed to be -- until the structures are destroyed. The cupboard is distinguished by containers and boxes, environmental structures that serve the purpose of getting in your way. With the ridiculous theme established, much of the game was mailed in. Coherently.

My friend Felix recently told me, on the subject of Kung Food, that the game should review itself. It does. It is adequate brawling on the Atari Lynx, which is not a handheld known for existing. Collision detection is problematic, especially when trying to fight hovering flies and darting rats. Copious health renders it tolerable, but not enjoyable. Bosses include an ice machine gone awry and a massive spud monster, but my enthusiasm is not palpable. It is a beat' em up about fighting personified vegetables in your refrigerator, but even I cannot mustard a single exclamation point. Just that lousy pun.

Kung Food is recommended if your only system is the Atari Lynx.

If you enjoyed this Kung Food review, you're encouraged to discuss it with the author and with other members of the site's community. If you don't already have an HonestGamers account, you can sign up for one in a snap. Thank you for reading!

© 1998 - 2022 HonestGamers
None of the material contained within this site may be reproduced in any conceivable fashion without permission from the author(s) of said material. This site is not sponsored or endorsed by Nintendo, Sega, Sony, Microsoft, or any other such party. Kung Food is a registered trademark of its copyright holder. This site makes no claim to Kung Food, its characters, screenshots, artwork, music, or any intellectual property contained within. Opinions expressed on this site do not necessarily represent the opinion of site staff or sponsors. Staff and freelance reviews are typically written based on time spent with a retail review copy or review key for the game that is provided by its publisher.