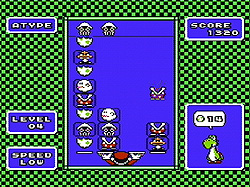 Bloopers. Boos. Piranha plants and goombas. All four encapsulated foes will fall from the skies as an especially pudgy rendition of Mario attempts to sort the baddies landing spots upon four separate platters below, his outstretched arms holding any two adjacent columns and a tap of either action button switching the stacks. Match the free-falling type with the type it lands atop and both will disappear, leaving more breathing room beneath the top barrier as the next pair, or on higher levels trio, begins its descent.

Itd be easy to call Yoshi a Tetris clone, but aside from common game over criteria there isnt much similarity. Tetris concerns rows and Yoshi columns. Tetris has more pieces and interlocking interactions between them, while the only novelty Yoshi offers is that bottom and top pieces of eggshells will occasionally fall alongside the baddies, a top falling upon any column with a bottom present completing an egg and erasing blocks sandwiched in between. With Tetris, random chance causes no two games to feel exactly alike, while the lack of strategy necessary here makes every game reminiscent of the last. Tetris has really good music. Yoshi doesnt.

I want to like Yoshi, and I suspect if it were merely included as some diversionary venture in the main sequence of Mario games I would speak of it positively rather than bleakly. If I were to rate the GameBoy version, the nature of my expectations for the platform pushes the score a full point higher, maybe two, because many roadtrips were shortened fifteen minutes thanks to this game. But I dont see much rationale to merit this glorified mini-games release as a standalone NES cartridge, where its lack of depth and staying power becomes disappointingly evident.

There are two game modes to choose from, A and B, with A the never-ending mode of increasing speed (and annoying intermittent torrents of three-at-a-time waves where the game piles on before easing up), while B presents already populated stacks that need to be completely cleared. Using the defaults settings (level one, low speed) mode A suffers from a lack of nuance, where sometime around levels 14 and 15 the celerity of falling objects becomes downright unmanageable. I played B past that point to level 17 before losing interest, as the difficulty appeared to have capped before reaching that same unplayability. Youll probably spend most of your time in mode A, and youll probably spend most of that time wondering how you can break the threshold level range where the game always seems to end. With more experience and recognition of stacking schemes that kept the pit level low, Tetris became manageable at high speeds. But Yoshi merely gets to the point where items fall too fast for human reaction, a point where every one of my games seemed to inevitably end.

At this point, which is not even difficult to reach due to the simplicity of the original objective, theres not much sense in playing Yoshi anymore. So while I certainly dont mind playing it as a moderately enjoyable break, playing two consecutive games becomes downright boring, and the repetitive music complements the feeling. Track three is solid and enlivens with a Diddy Kong Racing-style enthusiasm, but the default grows repetitive quickly, and track two feels out of place and not quality to begin with. Two player games are supported simultaneously on side-by-side playing fields, but no additions change its redundant nature.

Sometimes this is mistaken as Yoshis debut, but that was Super Mario World, and this was a late generation NES puzzle game released after the fact. But what Yoshi is unlikely to be mistaken as is a quality puzzle game, or one that involves anything puzzling at all, as its simplistic nature renders it as a cart without lasting appeal and worth no more than a couple of bucks.

If you enjoyed this Yoshi review, you're encouraged to discuss it with the author and with other members of the site's community. If you don't already have an HonestGamers account, you can sign up for one in a snap. Thank you for reading!

© 1998-2021 HonestGamers
None of the material contained within this site may be reproduced in any conceivable fashion without permission from the author(s) of said material. This site is not sponsored or endorsed by Nintendo, Sega, Sony, Microsoft, or any other such party. Yoshi is a registered trademark of its copyright holder. This site makes no claim to Yoshi, its characters, screenshots, artwork, music, or any intellectual property contained within. Opinions expressed on this site do not necessarily represent the opinion of site staff or sponsors. Staff and freelance reviews are typically written based on time spent with a retail review copy or review key for the game that is provided by its publisher.