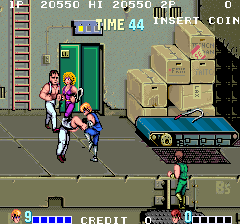 My advice is simple: play Double Dragon for the love of the brawler.

Some want to credit Renegade, both from Technos Japan and Double Dragons immediate predecessor in their line-up, as the title that originally established the beat em up genre. Before then, we had side-scrolling titles with kicking and punching  1984s Kung-Fu Master the first  but none with playing field depth or the urban element involved. Yet I cant find it in me to extend that accolade here at HonestGamers; Renegade is simply missing too many pages of the official beat em up playbook.

Its not continually side scrolling but arena-based, reminiscent of games like Street Smart and Ka-Ge-Ki that stand out as oddities amongst peers. Its more West Side Story than a showcase of the grit and grime that came to define the genres staunchest adversaries, Taitos localization masking its original intent of a Japanese youth standing up for his friend against schoolyard bullies. It has all of the fisticuffs but none of the style, and can be easily beaten in ten minutes or less. Most importantly, its not two-player, the singular aspect that explains the surge in the genres arcade appeal.

Double Dragon is the lone original author of the playbook.

When the Black Warriors gang member punches the dainty Marian in her stomach, slings her embarrassingly over his shoulder and walks off to the right, it marks both a setback for the feminist movement and the very beginning of the modern beat em up genre. Enter twin brothers Billy and Jimmy Lee, nicknamed Hammer and Spike for the American audience, emerging from a hard day in the garage (because working on cars is manly) to discover their mutual love interest kidnapped (bummer). Unfazed, they decide to lean upon their martial arts background (even manlier) in orchestrating her rescue. They do this because, if they succeed, one of them is probably going to get laid, as far as anyone has been able to tell.

What ensues is a left to right adventure where Billy, and optionally Jimmy, will match fists with an alarming number of people that have no need for shirts with sleeves. During the first stage, a woman in purple spandex emerges from a doorway cracking a whip. A gargantuan mountain of a man crashes through a brick wall looking to kick your ass. A gang member whips out a knife to sling, which Billy can block, pick up, and fire right back at his throat. Every beat em up for years after copied these identical ideas, and they didnt copy them from Renegade. They copied them from mission one of Double Dragon. 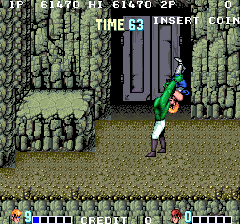 The city streets give way to dynamite hurlers and environmental hazards  bottomless pits, oil drums, a conveyor belt leading to a trash compactor  for mission two. Three detours through the woods as you near the Black Warriors headquarters, cleverly hidden inside a mountain(!), and protected by a nasty opponent resembling the Incredible Hulk. Four unveils a base as elaborate as the great pyramids, with massive bricks that shoot out from the walls and stone statues that prod with lances. The memorable and for its time elaborate soundtrack  an arranged version hit Japanese stores in 88  reaches its high-note for a final battle on the bossmans red carpet. Marian hangs from the wall helplessly bound by rope. The stakes have been raised, as the final competitor has brought a machine gun to the party. And should Jimmy and Billy both emerge victorious, players one and two will battle to win Marians heart.

Thats Double Dragon in a nutshell, and its themes have been reproduced an uncountable number of times ever since. Like stories passed down through generations, the Final Fight and Streets of Rage and various others flavors all end up better than the original, taking liberties with the content to make the tale more elaborate and exciting and unforgettable, embellishing on the original blueprint. Yet Double Dragon is the source material for all of them. While we can trace the roots of the beat em up deeper  to Renegade, to Kung Fu Master, to even Heavyweight Champ, that history bottlenecks at DD because after it, every single beat em up was following its lead. It is the foremost and defining example of the genre.

Dont play Double Dragon expecting it to have aged particularly well. When multiple enemies appear on screen  especially around hazards like the conveyor belt  the in-game play will be noticeably sluggish. The jump kick is sometimes sporadic and its delayed execution renders it not too useful. You can play forever and not find much difference between kicking and punching, especially in countering enemy tactics, and in order to one credit the machine an especially defensive and exploitative strategy is necessary. Time has not been so unkind as to leave Double Dragon unplayable, but at best a return visit will be merely a good time.

Play Streets of Rage first. Play Final Fight first. Play Cadillacs & Dinosaurs, and The Punisher, and Comic Zone, and all the other unforgettable renditions of the genre that are truly great games. Hear all the versions of the story, the ridiculous embellishments, and notice that no matter what some traits always remain, villains bursting through walls and lavishly red carpeted lairs and paths that lead through industrial parks. To play Double Dragon after that is to listen to an original recording or read an unedited manuscript; it is impactful in that exact way, where playing it leaves you feeling squarely in the shoes of something great just before it became great, and totally worthwhile for the understanding and knowledge it intrinsically provides.

My advice is still simple: play Double Dragon for the love of the brawler.

© 1998-2021 HonestGamers
None of the material contained within this site may be reproduced in any conceivable fashion without permission from the author(s) of said material. This site is not sponsored or endorsed by Nintendo, Sega, Sony, Microsoft, or any other such party. Double Dragon is a registered trademark of its copyright holder. This site makes no claim to Double Dragon, its characters, screenshots, artwork, music, or any intellectual property contained within. Opinions expressed on this site do not necessarily represent the opinion of site staff or sponsors. Staff and freelance reviews are typically written based on time spent with a retail review copy or review key for the game that is provided by its publisher.