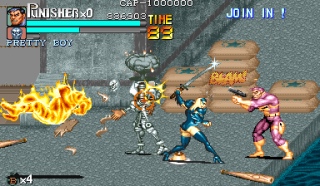 A former United States Marine and decorated war veteran yes, and proud of it too, but not the type of guy to constantly flaunt his sacrifices and flash his Purple Hearts. First and foremost Frank was a family man, humbled by his wife and two adorable children, liking nothing more than spending leisurely sunny days in the park by their side, picnicking and enjoying life before having to return to his militant duties of training future soldiers.

It was during one of these carefree frolics a mob hit went awry, and Frank's wife and children bore witness to the bloody results. Shamelessly they were slaughtered as well  gunned down in their tracks by heartless mafia hitmen for fear they knew too much  leaving a cold, bitter shell of a man left to cope with the shattered pieces of his once enviable life.

Frank Castle, as we knew him, died that day too.

Spawned from the calamity came The Punisher, forever replacing our blue-collar "everyday hero" with a hell-bent, vengeance-seeking vigilante. This antihero is not out fighting for the common good; he's fighting against the vile criminals that took away his family, utilizing any means necessary to do so. Should a few distressed damsels be rescued and precious ecosystems be saved in the process, then that's okay too. It's just not the primary concern here; igniting gun-toting gangsters with a flamethrower before hurling a steel harpoon through their abdomens is of greater importance to this man. Even the costume reeks of bad attitude: a dark blue spandex suit, skull design across the chest clinging to his ripped brawny frame, massive calf muscles bulging out of white leather boots. This man isn't a superhero at all -- he's just one hundred percent badass.

Likewise this Capcom title throws him into the toughest, manliest of genres; with only a slight tweaking of their Final Fight archetype, we're given side-scrolling beat 'em up perfection without the usage of stale or extemporaneous gimmicks. Rather, the Punisher theme is left to speak for itself. The over-the-top, comic book style violence, the hate-filled punches, the cheesy cut scenes and dialogue between levels, the meshing of serious stages (raiding an illegal poppy field and its mobile processing factory) with ridiculous enemies (a blonde-haired mountain of a man with a rocket launcher as an appendage)  all combine to create an unforgettable brawler.

After battling our way through a pool hall and down a crime-infested city street, stage one's boss boards an empty bus and flees away as we attempt to accost him for information. But there's no escaping The Punisher! Leaping onto the hood of a speeding van, we catch up to the bus and kick smash through the back window, set to take down the overgrown hulk and his slew of underlings that accompany the battle. Once beaten to within an inch of his life, we'll grab the perpetrator by the collar and lift him into the air, our other hand pressing the barrel of a cold, steel pistol against his temple.

"Tell me where your boss is!"

DID HE JUST DO THAT? 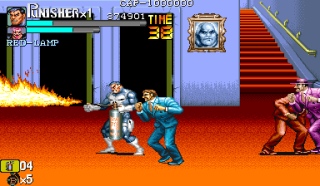 There's no time to stop and reflect. Before we know it, we're watching ourselves swim through a giant drainage pipe, finally emerging from a swimming pool to hopefully bring the Bruno behind our family's slaughter to justice. As we set foot on the deck an alarm system goes off and -- you guessed it -- we're set for more face-smashing, nose-busting beat 'em up action.

Unassuming henchmen enter the screen wielding battle-axes and baseball bats, but after a few fists catch their upper lips they'll drop their weaponry. Grab that idle Louisville Slugger and use it to smash the poolside patio furniture and oversized umbrellas to reveal more toys to wield, or better yet, bash the opposition with the splintering bat until it shatters over their head. Follow this up with a Roger Clemens special: hurl the jagged, wooden handle at the next thing that moves, be it disappearing and reappearing vixens in dominatrix outfits or human-headed robots with Stretch Armstrong-like arms, able to reach out, lift our hero above their heads and repeatedly slam the life out of him.

Should a few Michael Corleone wannabes make an appearance wielding .45s when we enter Castle Pantaberde's sumptuous hallways, we won't have to "dance" around the screen trying to stay out of their lines of sight. The Punisher is equally equipped, all too willing to pull out his trusted revolver and make waste of these scumbags should they "be asking for it" and draw their weapon first. Don't be fooled though; we rely much more on our fists and our array of disposable weaponry than we do on our piece. Its sole purpose is to break up the monotony beating up an entire army of thugs can bring (even Final Fight was repetitive by the twentieth Andore), and it serves its purpose well. At no point will we be asking when a siege of attackers will end; The Punisher always leaves us wanting more.

Except for the bosses. They're plenty fulfilling. 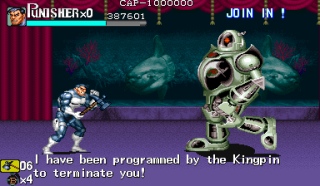 Castle Pantaberde's keeper is a mechanically engineered beast, thunderously leaping about the luxurious bedroom we're battling in, the ground quaking beneath his feet each time he lands (be sure to jump!). This isn't the only trick in his bag though; a pink laser beam periodically streams from his head in both directions to damage us, and should we get a little too close, his robotically kicking legs will boot us halfway across the screen. Factor in a couplet of regular enemies constantly regenerating and we've got ourselves a tough boss battle against a very healthy opponent (his life bar is four times the size of ours), this in just the second of six stages.

We've still yet to encounter Bonebreaker, a paraplegic foe unwilling to let his disability stop him. Instead of a wheelchair his lower half is a heavily plated tank, and when he's not trying to grind our vigilante up in the treads, he's releasing a half dozen missiles skyward to dodge or chasing us down with a scorching flamethrower.

We still haven't dropped into waste-high, polluted sewer water, where knife fighters and karate kids alike await our entrance. Lead pipes and samurai swords lie just beneath the surface, the preferred method for eliminating diverse groups of five and six goons trying to engulf us in the melee.

And most importantly, we still haven't brought the culprits to justice.

Packing an extraordinary amount of cheesy, comic book flair, The Punisher is brimming with brutality, exuding of machismo, and yet quirky enough to keep everything from reaching too serious a note (we still eat roast turkeys out of oil drums to regain health). In a genre built around the concept of revenge -- whether retrieving kidnapped girlfriends or regaining control of crime-overridden cities -- we finally have a character that personifies this concept. Icy and heartless -- but heartless for a reason -- there is no better man to bring stereotypical criminal masterminds to justice.

Frank Castle was his name.

© 1998 - 2022 HonestGamers
None of the material contained within this site may be reproduced in any conceivable fashion without permission from the author(s) of said material. This site is not sponsored or endorsed by Nintendo, Sega, Sony, Microsoft, or any other such party. The Punisher is a registered trademark of its copyright holder. This site makes no claim to The Punisher, its characters, screenshots, artwork, music, or any intellectual property contained within. Opinions expressed on this site do not necessarily represent the opinion of site staff or sponsors. Staff and freelance reviews are typically written based on time spent with a retail review copy or review key for the game that is provided by its publisher.