I am an armchair emperor.

Today, from my throne of foam and plastic, I will direct my digital underlings in pursuit of wealth and fortune. I will crush all those who oppose me under my heel, and from their bones build the foundations of my empire.

But first, I must acquire the tools of leadership and command that I will need. I must relearn all I know, for this new field of battle is different and strange to me. My headquarters: a quaint little restaurant with a dozen or so tables. I quickly decorate it my best approximation of a Greco-Roman style. 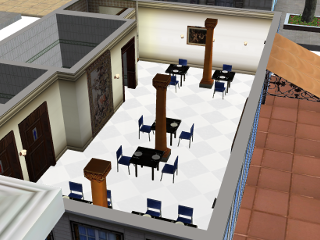 I am told that this will attract customers to my restaurant and make them happy. Or something. I care not for the foolish desires of the unwashed masses, so long as they serve my whims. With a suitably-decorated establishment to my name, I assemble a menu and set about hiring loyal minions (I'm told they're called "employees" in this line of work. Hopefully they'll still be able to crush dissent with an iron fist).

Strangely, most of them look identical to one another, except wearing different clothes and standing on a different side of their portrait icon. But there are subtle differences; some would-be employees cost more than others, some have greater abstract "skill" than others. The relationship between skill and wage seems, to the unaided eye, linear (really, Strategy, I am disappoint). I hire the cheapest from each category, while laughing at the dishwasher who insists on being called a "kitchen porter". How quaint. I play with some sliders to try and maximize morale. At several points I must resist the urge to press the tempting FIRE STAFF button and squash their pitiful dreams of steady employment. My tyranny knows no bounds.

Thankfully I can speed up time until something interesting happens. Meantime, I browse the Report screen, a collection of spreadsheets and numbers that all tell me exactly how well I'm doing in forehead-bleeding detail. There's even a handy graph, and a list of average values of things like my restaurant rating, patron satisfaction, and some grand totals of things like drinks served.

More waiting. I am told my menu is not diverse enough. Aha, I say, then I shall simply add every recipe in my arsenal and obliterate their pallets with brute force much like excessive italics do to your eyes!

Victory is mine, for now. By simply adding every single recipe known I have triumphed over this otherwise unassailable goal. But wait! Another challenge presents itself; there are apparently not enough seats to serve all my potential customers!

Stand back, citizens; this looks like a job for Brute Force Man!

Ah, but curses! My tasteful Corinthian pillars leave precious little room for additional seating. Perhaps if I tear them down I can fit more tables. 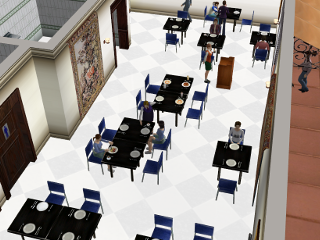 Take that, Game! By stripping my restaurant of what little Greco-Roman ambiance I could scrape together, I can maximize seating capacity and generate more profit! I spend the next several minutes with the Delete cursor hovering over tables, waiting for customers to leave so I can have them removed and the floorspace optimized.

But what's this? Service too slow? Hmm, this new problem sounds tricky. Perhaps I should hire another server?

What the hell. I'll take two. But just as I hire these new servers, I receive piles of complaints that the head waiter (or "captain" as he laughably insists we call him) is rude and unpleasant.

A gleeful smile crosses my lips. This solution, at last, is familiar to me.

A single click of that delightful little button, and the ill-mannered Pierre Morin is no more. A few more complaints about one of the servers, and he shares a similar fate. Replacements are procured instantly.

But ah, how cunning, Game! You penalize my seating optimizations by generating noise from adjacent tables, to the chagrin of my patrons! I had not considered this. My Greek columns return, providing a much-needed buffer between customers. From here, it's clear sailing to the end of the month, where I comfortably meet my goal.

But what challenges await my Restaurant Empire next month? Liquor licenses and dumb waiters that cost an arm and a leg, but net long-term profits? Hiring additional staff and firing problem minions employees? Optimizing seating and serving paths for best results? From the looks of it, yes, more cause-and-effect problem solving, more looking at spreadsheets and watching miniature people run around, more juggling of sliders in response to ever-changing random numbers.

I have the strong suspicion my job could be better served by a simple Java applet. That's enough, I think, for this Caesar; this empire is not worth taming.

If you enjoyed this Restaurant Empire 2 review, you're encouraged to discuss it with the author and with other members of the site's community. If you don't already have an HonestGamers account, you can sign up for one in a snap. Thank you for reading!

© 1998-2021 HonestGamers
None of the material contained within this site may be reproduced in any conceivable fashion without permission from the author(s) of said material. This site is not sponsored or endorsed by Nintendo, Sega, Sony, Microsoft, or any other such party. Restaurant Empire 2 is a registered trademark of its copyright holder. This site makes no claim to Restaurant Empire 2, its characters, screenshots, artwork, music, or any intellectual property contained within. Opinions expressed on this site do not necessarily represent the opinion of site staff or sponsors. Staff and freelance reviews are typically written based on time spent with a retail review copy or review key for the game that is provided by its publisher.