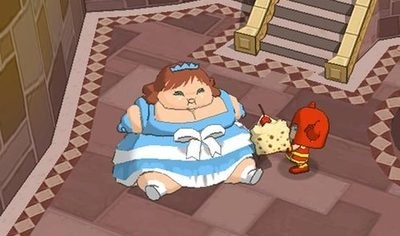 Well... shes no Helen of Troy. But then, what Fat Princess by Titan Studios teaches us is that had Helen put on a bit of girth, maybe the dumb bitch never wouldve been carried off by the Trojans in the first place.

Fat Princess, available for download off the PSN store, is a game best played with a crooked grin on the face. In this inspired twist on the classic capture the flag style game, two teams fight to break into each others strongholds and rescue their princess from the dungeons. They then have to carry the princess back across the map to their own castle and set her on her rightful place on the throne. There are plenty of obstacles to make this trek a deadly one, not least of which is the other teams arsenal of swords, arrows, and high-explosives.

Yet by far the biggest barrier to your success will be cake. Black Forest cake, to be specific. From the Black Forest.

By forcefully shoving slices of this delicious cake down your princess gullet, the enemy will turn her from petite royalty into a monstrous blob of gluttony and satin, making it all the more difficult to drag her back to safety. Thankfully, youre not alone in this mission. Youve got as many as 15 other team members and a wide variety of hats to see you through.

Yes, thats right. Hats. These are no ordinary hats, however. These are hats of status quo. When worn, these magical objects of fashion change your job, giving you access to different weapons and abilities. Fat Princess exists in a very progressive society. Changing careers is as easy as changing headgear, so youll have plenty of opportunity to get to know the ins and outs of each job. You'll need to know this, because different jobs are suited for different situations. Imagine taking control of individual units in a Real Time Strategy game. That's the sort've micro managing strategy Fat Princess' offers gamers.

Take the Ranger, for example. When you pop on his feathered cap, you'll gain arrows, best used on the edge of battle from outside melee range. But your true goal is to make it to one of the many outposts spread across the map that teams can claim as their own. When put atop one, Rangers lose their mobility but become one of the deadliest units in the game, pelting enemies from an unreachable height. This makes the Ranger a "choke point" unit, a true defender.

Now, the Worker, on the other hand, he's a resource collector. When you're wearing his bandana, your goal is going to be to chop down trees and hills of gems to take back to your fortress. You'll also be repairing breached gates and building neat contraptions, like a catapult that launches team members across the map into the enemy stronghold. The Worker is a key unit early in a match, as he's the only unit that can upgrade the others.

Once a class is upgraded, they gain access to another set of weapons/abilities in addition to their starting set. For instance, the Priests start off as a defensive class, using healing magic to keep the other units alive. However, once upgraded, they gain access to the perverse arts of the Dark Priest and can rapidly drain the life of any unit that dares to approach them, making them much more versatile. Sadly, there's only one upgrade per class, so there's none of the usual RTS branching option strategy, which could add a lot to the already delicious batter.

As far as controlling these classes on the battlefield, gameplay is reminiscent of the old top-down Zelda games, if the enemies didnt follow set patterns and occasionally shouted curses at you over their headsets. It's quick and fun and easy to pick up. The one downside is that your targeting system is overly simplistic. You just hit the target button and hope it selects the unit you wanted (usually it seems to pick the closest unit). This is fine most of the time, as battles are either one on one or huge mosh pit style screw-alls where it doesnt matter who youre hurting. However, there are times where you want to be able to take out, say, a line of Priests hanging behind the enemy continually healing them and the targeting system doesnt make it easy to do that.

Still, theres few things as entertaining as seeing player clash on the comical battlefields of Fat Princess. Units look like little toy Vikings and they scream defiance and taunts with the squeakiness of cartoon chipmunks. Watching them jump off pirate ships or run through treacherous lava fields brings to mind a nostalgic sense of playing with action figures as a child. Baroquian jigs set the mood as these guys hack and maim each other, often resulting in explosive sprays of blood and gore as they are decapitated, squashed, blown up, and eviscerated. Meanwhile, the princesses yell orders in increasingly baritone voices: Save me, my hero! Feed me more cake! Youll never get tired of hearing this. Its always enjoyable.

Which is good, because matches sure can drag on for a while. If both teams are up to snuff, there will inevitably come a time when they both have all the upgraded units and devices, both have blown holes in the sides of their opponents castles, and yet neither can seem to make any headway in capturing their princess. Storming a well defended base, after all, takes a coordinated team effort and Fat Princess, by its very nature, is not an easily coordinated game. Theres simply too much going on. There are outposts to be claimed, resources to gather, walls to defend, and princesses to be force fed. Its difficult to get everyone into any kind of order and until you do the match is destined to continue in a stalemate. There is supposedly a time limit on matches, but Ive yet to come across it. Ive often been in matches which lasted upwards of half an hour. Not long, perhaps, in the grand scheme of online gaming, but with the smallness of the maps, the simplicity of the combat, and only one upgrade available per class, Fat Princess just feels like a game meant for a shorter time table.

It's a small complaint, though. For one thing, there are other modes of play which are more self regulating. Capture and Hold has you trying to capture outposts in a sort of Battlefront rip-off. Deathmatch presents teams with a counter that decreases every time one of their guys is killed, with the goal to get the other teams counter to zero. Theres even a soccer mode, in the lightest sense of the word. Yes, theres a ball. Yes, theres two goals. But theres also axes and bombs and you slap the ball across the field instead of kicking it.

Of course, no one plays these other modes. This isnt Fat Soccer, after all, this is Fat Princess. Players dont go into this expecting an amazing deathmatch game. They expect to drag bloated princesses across no-mans lands as little viking dudes. That's a joy that can only be found in Capture the Princess mode and even though the matches can drag a bit, it never quite outlives the smile it's sure to plaster on your face. Players were promised a good, silly, time with Fat Princess. That they also get an experience packed with the strategy of an RTS mixed with the action of a Zelda game was just icing on the...

If you enjoyed this Fat Princess review, you're encouraged to discuss it with the author and with other members of the site's community. If you don't already have an HonestGamers account, you can sign up for one in a snap. Thank you for reading!

© 1998-2021 HonestGamers
None of the material contained within this site may be reproduced in any conceivable fashion without permission from the author(s) of said material. This site is not sponsored or endorsed by Nintendo, Sega, Sony, Microsoft, or any other such party. Fat Princess is a registered trademark of its copyright holder. This site makes no claim to Fat Princess, its characters, screenshots, artwork, music, or any intellectual property contained within. Opinions expressed on this site do not necessarily represent the opinion of site staff or sponsors. Staff and freelance reviews are typically written based on time spent with a retail review copy or review key for the game that is provided by its publisher.