There comes a time in a dude's life where he has to reflect upon certain things he needs to change and the coming of a new year is as good a time as any.

Let's face it -- I like to party like there's no tomorrow, but I'm not getting any younger. It's getting harder and harder to wake up bright and early after a long night of pounding the brewskis and I really hate saying things in the morning like, "Why am I facedown in my bathtub? Wait! This isn't MY bathtub! Where am I??!?!!?" It's very disorienting -- probably moreso for whomever's house I broke into to crash, but not my cup of tea, either.

So, obviously, a lifestyle change is in order, but for a hard-rockin' dude like me, that's easier said than done. I needed help. And that's where the fantastical adventures of Wally Bear and the No Gang come into play. Because what could better help a grown man with his growing substance abuse problems than a bunch of little animals yammering about how cool it is to JUST SAY NO?

So, I turned on my NES to see the gnarly visage of a bear that looks kinda like a dog preparing to do some sort of crunk move on his skateboard. His coordination uninhibited by booze and pills, Wally and his mad skating skills were already setting a great example for me. Because, after all, skateboarders and other extreme sports participants are the LAST folks I'd expect to ever drink a beer or toke on reefer!

Things got a lot more confusing after I started to play. Oh, on the surface, I was still getting a powerful, uplifting message, as Wally's parents told him to collect his friends and go to a nice, clean party at Uncle Gary Grizzly's house while remembering to JUST SAY NO! But from looking at Wally's house and his family, I began to wonder if everyone was as clean as they were pretending to be. 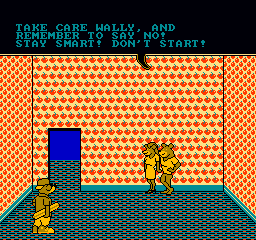 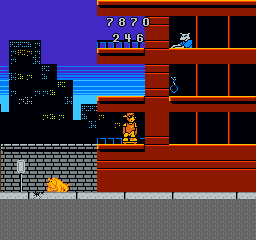 Look at the picture of the Bear Family's crib above and to the left. The entire house is decorated with atrociously ugly apple wallpaper. Just looking at that place for the time it took to scroll through the text was more than enough to send me careening off the wagon. And the fact Wally's dad apparently is allergic to pants didn't help matters much. I can't speak for everyone out there, but I've never indecently exposed myself WHILE SOBER!

Shaking my head and taking a long swig of my first rum-n-coke, I took control of Wally as he began riding his skateboard through his neighborhood in search of his friends. At this point, I realized how difficult it would be to ride the straight and narrow, as even tiny white birds and pet dogs were interested in diverting Wally from his holier-than-holy crusade. And it didn't help that Wally's a real sissy-boy who'd succumb to even the slightest contact with these common animals.

Fortunately, it was a really short trip to the town's train station. I mean, this was the sort of introductory level that takes about one minute to do, as all I had to do was jump over slow-moving bulldogs while hoping a bird didn't randomly fly into Wally's head. To help him out, I could pick up a couple of power-ups, both of which allow him to take a hit before giving up on the whole "clean living" thing. The frisbee also lets him fire slow-moving projectiles at foes, while the skateboard icon lets him move faster. I loved this item, because "natural Wally" moves with all the speed of an uncoordinated drunk terrified by the knowledge he inevitably will be eating gravel.

Sadly, things never improved from that point. Between virtually every stage is a brief cutscene where Wally talks with one of his friends about the importance of SAYING NO and DOING THE RIGHT THING. In that train station, some rabbit lets Wally know that some no-goodnik named Ricky Rat is going to make Wally's kinda dim buddy Toby Turtle pop some pills to join his gang. After doing another short level, I got to see the satisfying conclusion to that little drama, as Wally tells Toby that doing drugs is stupid and if someone makes you do them to be his friend, they're no friend at all. Inspirational. 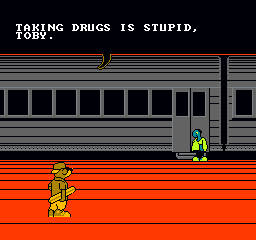 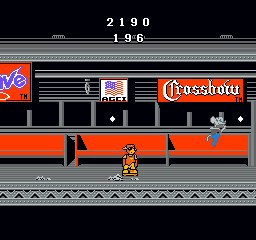 As I progressed, Wally recovered some other animal's radio and gave an announcement on how stealing is bad, found out another critter with the unfortunate name of Larry Lizard went into a parking garage to booze away his problems ("don't drink and drive" spiel) and hears that some mysterious fellow is luring children into his car with promises of candy (yep....another opportunity for Wally to pontificate). I also noticed that none of these things had much to do with the actual game, which consists of one short, generic platform level after another. Well, after hearing about the wacky misadventures of Ricky Rat and Larry Lizard, Wally does have to deal with a lot of rat and lizard foes to get through levels, but that's about it. That's too bad, as I'd have gotten into this game a lot more if Wally could be abducted by a candy-offering stranger, who'd proceed to stuff a ball-gag in his mouth and chain him up in a secret underground chamber. That'd be the coolest "GAME OVER" screen of all time. I bet Wally'd learn to practice what he preached!

I don't have anything against video game designers attempting to insert uplifting, motivational messages in their games -- but they better make sure they have a fun game built around what they're preaching. The first few levels are pitifully easy and repetitive as hell. Then, towards the end, the difficulty level reaches the WTF?!? phase that horrid NES games seemingly took pride in achieving, as Wally, who isn't the easiest guy to control in mid-air, is stuck doing a number of precise jumps with death being the price of failure. And all he's trying to do is get to his uncle's house for a party. Maybe Wally should scrap his morality lessons and hang out with Ricky Rat -- all he has to do is jump some dogs and dodge some birds to visit him!

Wally Bear and the No Gang is an utterly abysmal game with a few public services announcements thrown in as an attempt to give it some value. That's not going to work. Kids aren't going to want to play a game like this on their NES when they can play great platformers like the Super Mario Brothers and Mega Man games. Maybe those heroes don't stop the action to give speeches on how kidnapping princesses isn't nice or that reprogramming robots to conquer the world might be a sign of repressed sexual desires, but they were in fun games people wanted to play. Wally's message was doomed right from the beginning.

© 1998-2022 HonestGamers
None of the material contained within this site may be reproduced in any conceivable fashion without permission from the author(s) of said material. This site is not sponsored or endorsed by Nintendo, Sega, Sony, Microsoft, or any other such party. Wally Bear and the No Gang is a registered trademark of its copyright holder. This site makes no claim to Wally Bear and the No Gang, its characters, screenshots, artwork, music, or any intellectual property contained within. Opinions expressed on this site do not necessarily represent the opinion of site staff or sponsors. Staff and freelance reviews are typically written based on time spent with a retail review copy or review key for the game that is provided by its publisher.