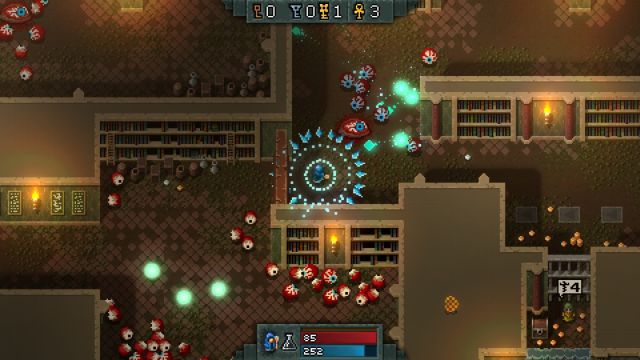 Story as old as time: games don't need to provide brand new, wholly unique experiences to be worthwhile. Sometimes they rehash or rework content that previously proved effective, and that's enough. Case in point: the hack 'n slash banger Hammerwatch. There isn't much more to this adventure than wandering around, mashing the attack button, and annihilating anything that looks sinister. In the early outs of the campaign, combat amounts to slaying a few maggots here and there, and maybe eliminating a spawning point or two. It isn't long, though, before "a few" becomes "dozens," which gives way to "legions," which evolves into "holy crap, I'm fighting every maggot that ever existed." Although that prospect sounds daunting, the truth is it's incredibly exhilarating.

Hammerwatch's smooth mechanics and simple play control serve only to accentuate the game's intensity. It's exciting to gaze upon an immense fray and realize that you can easily dance around your opponents while taking choice cleaves, plucking arrows, or slinging devastating spells. It's comforting to know that all you have to do is aim and fire, and perhaps hold down another key or trigger in order to strafe. From there, you can weave around your adversaries while mashing the attack button, and watch as the bodies pile up and loot manifests in place of their cold corpses. Snagging such goodies can lead to permanent stat boosts or increases in your cash supply. With a fat enough stack of coins, you could purchase some helpful consumable items, such as restorative or offensive potions, or even further develop your character. Nothing makes your pouch of coins feel richer than possessing a stronger bow or nimbler feet.

Don't get me wrong; I'm not saying that Hammerwatch's campaign is easy. As it turns out, not every foe can be felled with a single shot, so whittling down a particular contingent could consume a fair chunk of time. Meanwhile, it's your duty to check your six, keep your flanks clear of crowds, and especially try not to aggro an adjacent army while dealing with the one before you. Even in multiplayer mode, it's easy to become overwhelmed and eventually done in by the numerous bumps, scratches, and pulverizing projectiles that nail you. 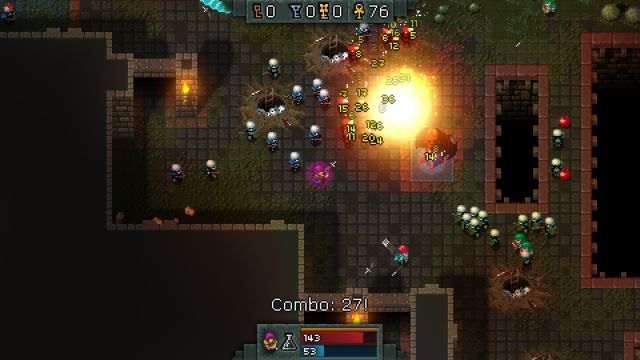 Combat may be one of the main selling points of Hammerwatch--that and its likeness to its inspiration, the ancient arcade classic Gauntlet--but it's not the only perk the title has to boast. To wit, it also sports some fierce stage designs. The game is divided into four acts, each with three stages composed of convoluted corridors, spacious chambers, and penned off locales. Each trio of levels connects to one another through a series of staircases positioned at various points throughout each map. Ascending one stairway doesn't guarantee that you're done with a level. For instance, you may need to descend another set of stairs later on in order to snag a necessary key or to activate a switch that clears an impediment. As if those details weren't complex enough, stages also sport various hidden nooks and crannies, usually accessible by walking through a false wall or eliminating part of the environment.

If there's any other aspect of Hammerwatch that bolsters the experience, it's the music of composer-duo Two Feathers. Pieces of the soundtrack hark back to the 8- and 16-bit eras of gaming, smacking at times of retro dungeon crawlers while occasionally recalling the early works of Yasunori Mitsuda. The bottomline, though, is that their music perfectly captures Hammerwatch's fantasy elements. You have tracks like "Metal Chambers," which features a fairly easygoing mood combined with a wonderful dwarven chant. Then there's "Heroes Never Die," which is one of those ire-raising cuts that almost sounds symphonic, which is pretty much essential for an experience like Hammerwatch. There's something about that particular BGM that instills a sense of knightly righteousness. "At the Gates" bears some obvious traces of old school gaming music, placed along side some sweet guitar riffs that might remind you of a few tracks from Castlevania: Symphony of the Night. All in all, it's a fantastic indie score that kills some of the music heard in major studio productions. 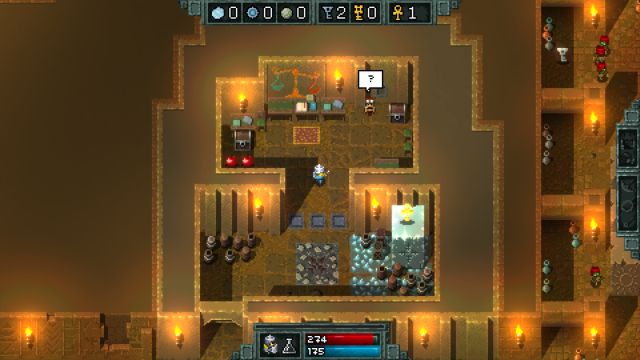 I can't say that Hammerwatch bears any horrendous flaws. Unfortunately, it is yet another game in a fairly overcrowded category, one which has already established who rules the roost. While Hammerwatch may not be a "perfect 10" in that respect, it is far above boatloads of similar titles, mostly because of how stably the game operates when presented with gigantic masses of enemies. There's never a hiccup, even when the screen is practically covered, and I've yet to encounter a major crash or terrible instance of lag.

Speaking as someone who played through this trip on a solo run, you don't need cohorts to maintain the action or entertainment values. Hammerwatch is a thrill to play, even by yourself, even having plowed through scores of similar hack 'n slash titles. Granted, you won't be greeted by deep storytelling or much enchanting world-building, as you might in more complex titles. However, this one scratches the "dispatch everything that moves" itch effectively without bogging you down with bloat or excess. Developer Crackshell should be commended for crafting a swift adventure that cuts right to the chase and kills time as surely as it does fantastical beasts.

If you enjoyed this Hammerwatch review, you're encouraged to discuss it with the author and with other members of the site's community. If you don't already have an HonestGamers account, you can sign up for one in a snap. Thank you for reading!

© 1998 - 2023 HonestGamers
None of the material contained within this site may be reproduced in any conceivable fashion without permission from the author(s) of said material. This site is not sponsored or endorsed by Nintendo, Sega, Sony, Microsoft, or any other such party. Hammerwatch is a registered trademark of its copyright holder. This site makes no claim to Hammerwatch, its characters, screenshots, artwork, music, or any intellectual property contained within. Opinions expressed on this site do not necessarily represent the opinion of site staff or sponsors. Staff and freelance reviews are typically written based on time spent with a retail review copy or review key for the game that is provided by its publisher.