If the Famicom's version of Ys II had been ported over to American soil, I can pretty much guarantee that it'd be one of those games I bought, told myself I was having a damn good time playing it and then, down the road, mourned how it aged pretty poorly.

Part of that is connected to the self-delusion that's been intertwined with every bit of my being. During the NES days of my youth, I played such "greats" as Hydlide, Deadly Towers and Milon's Secret Castle for hours upon hours while my brain worked overtime trying to say that these were fun experiences so that I could justify myself to myself.

The rest? Simply the nature of the game. Remember Dragon Warrior? It was the first game in a super-popular RPG series that still is active today. I beat that game multiple times and consider it a classic, even if it  repeat after me  aged pretty poorly

In that game, you had three goals: rescue the kingdom's kidnapped princess, obtain the necessary tools to access the Dragonlord's castle and, finally, send that being to its grave. You also had many hours of play, most of which tended to be spent running in circles around towns in order to gain levels to get more powerful and obtain money for superior equipment to also get more powerful. Back then, this all was new to me and I didn't know any better. By today's standards, it was somewhat of a slog where the time I spent grinding far exceeded the time I spent doing things like exploring the world and achieving those goals.

Ys II is the action-RPG version of Dragon Warrior. 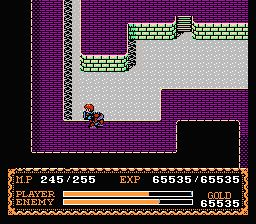 After the events of the first game, series protagonist Adol winds up in a village located on the land of Ys. After doing little things like talking to villagers in the hopes that a couple of those people have something useful to say, he'll exit and start exploringI mean, grinding.

The area directly outside of town has a handful of weak enemies which he can easily beat by running into, at least if he's careful. Much like the first game, you don't use any of the controller buttons to swing Adol's weapon  instead you simply run into foes. A head-on collision is risky unless he has a substantial power advantage, but if you run into them from another angle  such as a half-step to either side of "head-on"  you'll have the advantage, assuming you're actually strong enough to harm the baddie in question.

Which is a problem when it initially comes to advancing the game. To be able to progress any farther than the room in the nearby dungeon that hosts the game's first boss, you'll need fire magic. To obtain this, you'll have to give a guy in that opening area an item. To get that item, you'll have to open a treasure chest guarded by a pair of stronger foes. To damage them, you'll need to kill weaker foes until Adol reaches his third level of experience  a task that takes a total of 300 experience points when the foes you can kill only offer one or two per pop.

But that's not a huge issue. Even if this task is pretty boring, it still won't take THAT long for you to do what's necessary to get the fire spell and, emboldened by your success, decide to challenge that dungeon. At which point you'll realize that, while the enemies in the entry level are doable, those in the cavernous area making up the bulk of the dungeon are made of sterner stuff. Cue more grinding. Oh, and don't forget this: While your health will automatically regenerate when standing still in town or in that first area you visit, it will not in this dungeon. Or any other dungeon or location with hostile critters, for that matter. You could buy an herb to give you the ability to regenerate health, but you'll also want to save money for superior equipment. Even if that stuff boosts your offense and defense less than gaining a level will, every little bit counts, right? 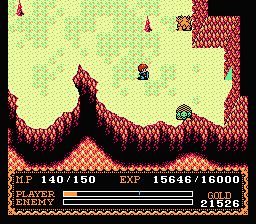 That's Ys II in a nutshell. You'll grind for a while, go through an area or a dungeon, reach another place and realize you need to grind more because you either can't damage enemies with your current strength or you'll be depleting their life too slowly to make killing them remotely convenient. This cycle will continue until the very end, although if you're not using a guide to get through this game, you'll likely reach maximum level long before you reach its very difficult final boss.

There were a lot of NES games that I can safely say that I beat partly because I had a subscription to Nintendo Power. It was tough to get through a lot of them due to obscure objectives and vaguely-worded (or outright misleading) hints, making it a godsend to have access to a magazine willing to divulge those secrets. And, well, Ys II is a game where you get a number of items that have a specific use that may or may not be made remotely clear to you. It also possesses a massive late-game dungeon that is utter hell unless you're a big fan of grinding levels via aimlessly wandering for hours.

I mean, this place is a trip! You'll need a spell that turns you into a monster to enter it and talk to various stationary foes to get hints. Over the course of your time there, you'll not only be walking in and around a massive structure where everything blends together and looks the same, but also a massive sewer system under it  where everything also blends together and looks the same. At specific times, you'll have to interact with specific people, monsters and items, often leading to lots of that aforementioned aimless wandering. This is an evil, evil place. Without an online guide, I might still be there, running in circles while trying to remember where the one guy who was going to give me the one thing happened to be.

Don't get me wrong, the game isn't a complete slog. Its style of "run into stuff" combat does make battling go quickly. From what I read, this game also is faster-paced than other versions, allowing a skilled player to tear through foes with alacrity. Compared to the first Ys, there is a good amount of diversity in the places you'll visit. I mean, snowy and desert areas might not set the world on fire, but when you consider just how much of the first game took place in the same tower, it's a lot more variety!

In reality, the main "problem" with Ys II is that it  or at least this version of it  simply isn't the sort of timeless game that I can sit down with decades after its release and still think of as being particularly fun. As all the time I spent with Dragon Warrior back in the day can attest to, there was a time when I could be endlessly entertained by the act of running in circles to grind levels. Nowadays, I like to feel I'm actually DOING something while gaining those levels. I'm not going to condemn a game for essentially being a prisoner of its time, but I'm not going to celebrate it for that, either.

If you enjoyed this Ys II review, you're encouraged to discuss it with the author and with other members of the site's community. If you don't already have an HonestGamers account, you can sign up for one in a snap. Thank you for reading!

© 1998 - 2023 HonestGamers
None of the material contained within this site may be reproduced in any conceivable fashion without permission from the author(s) of said material. This site is not sponsored or endorsed by Nintendo, Sega, Sony, Microsoft, or any other such party. Ys II is a registered trademark of its copyright holder. This site makes no claim to Ys II, its characters, screenshots, artwork, music, or any intellectual property contained within. Opinions expressed on this site do not necessarily represent the opinion of site staff or sponsors. Staff and freelance reviews are typically written based on time spent with a retail review copy or review key for the game that is provided by its publisher.