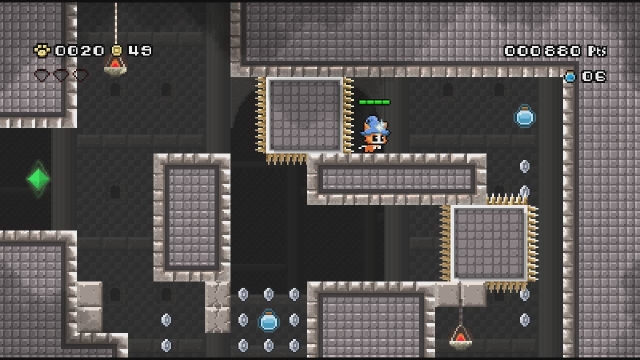 Two thoughts shot through my head as I booted up MagiCat for the first time, prepping for another mega-tough platformer. The first brainwave said: "God, not another one..." You see, I've been through my share of face-destroying, faux-retro games for over a decade now. And hell, before that I tucked into actual-retro platformers, back when they weren't retro. After a lifetime of swearing, groaning, and aging, I've gotten to the point that I'm short on patience and I can only take on one of these bad boys occasionally.

However, they're never off the table...

The other thought also chimed in: "Yes! Yes! Another one!" Despite my slight category burnout, I remain enthusiastic to check these games out. What can I say? Old habits die hard, and I'm too stubborn to give up titles that are equally addictive and frustrating.

MagiCat wears some of its influences on its sleeve. First glimpses into its realm stir memories of Super Mario World, where you guide the titular feline along a world map that smacks of the plumber's 16-bit debut. Hell, a handful of other Mario trappings also crop up throughout your quest, such as warp items, floating chain link barriers for you to climb, a few enemy knockoffs (including ghosts that act like Boo), and a few familiar level themes. 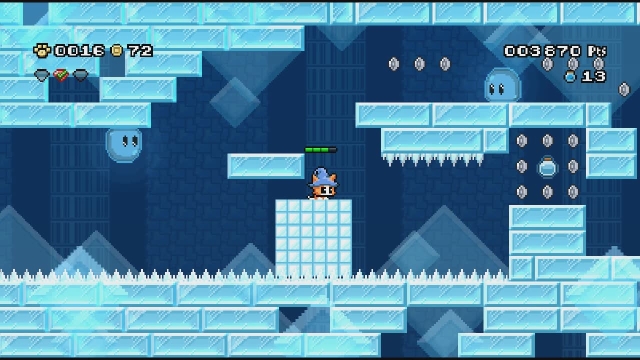 Your travels take you across seven worlds, each with nine stages. Here's the thing: instead of every world bearing its own gimmick or theme, every level utilizes its own motif. For instance, one stage revolves around rising lava, and another grants you portal-creating capabilities. A different gauntlet pits you against large foes that are difficult to fell, eventually leading to an outing that features adversaries that become indestructible ghosts when they die.

Each stage offers three gems to collect, which prove crucial to your quest. They not only give you a 100% clear game that will mark you as an important person who belongs on the cover of magazines, but they also serve as cash for special items that give you tremendous advantages. You might, say, snag a relic that extends your invincibility frames, or secure a hammer or a bridge that allow you modify the overworld. That way, you can skip levels or access isolated parts of the map.

The thing is obtaining that sparkling star on your gaming resume isn't a simple task because MagiCat wants you to perish horribly. Thankfully, its mechanics prove more than ample for tackling the first world or so. The heroic kitty leaps with grace, fires projectiles in a slight downward arc, temporarily floats when you hold the jump button, and dashes both on ground and midair. Utilizing these handy skills, you take all all manner of cute monsters, navigate structures made of floating platforms and crawlspaces, and throw switches to open up barred off portions of the area. 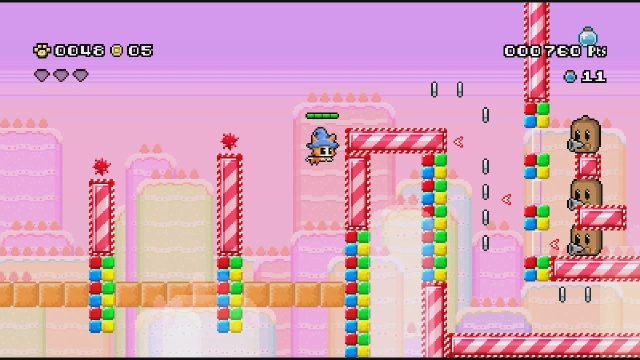 However, hazards and creatures pop up in ways that keep you on your toes. You find yourself frequently negotiating numerous platforms while multiple flying critters spit bullets at you, prompting you to potentially plummet to your demise. Now and then, you might try to bound over a pit, only to get nailed by a fireball or beast that leaps out of the hole unexpectedly. Hell, the worst moments involve locales loaded with spikes that appear to be impossible to cross. That's when you've got to observe your surroundings and experiment.

Or just farm "cat paws" like there's no tomorrow...

For a while, MagiCat kills time effectively, hitting you with levels that are tough, albeit doable. Mainly, it softens its own blow by providing magic points and cat's paws that serve as another type of currency. Magic manifests as potions hanging out in each stage, which allow you to cast spells--such as a valuable healing art--or activate checkpoints. Paws, on the other hand, are a tad more useful. Each time you expire, the game gives you the option to revive on the spot, less a few paws. However, each subsequent death while visiting a single level doubles the resurrection cost. Thankfully, this cost elevation resets before you fight a boss or after you complete a stage.

At first, you end up rationing paws so you don't respawn too often. Bear in mind that you also expend these items any time you create one of the aforementioned bridges or use a hammer on the world map. However, you soon learn that earning additional paws is so simple it feels like robbery. You can not only farm coins on the overworld (with one hundred of them converting to a single paw), but you obtain dozens of paws each time you complete a stage for the first time or you nab all of the potions in a given level. 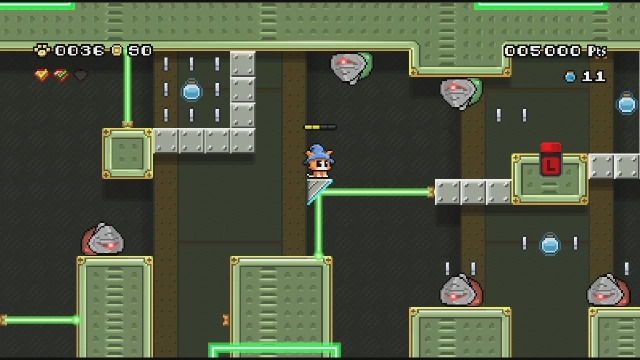 Unfortunately, the later phases of the campaign present you with cheap moments that you can't reasonably expect to survive unscathed. For instance, one boss fires multiple lasers at such intense speed that even the most reflexive players won't likely dodge them all. After several affairs where you sustain damage you couldn't hope to avoid, you just say, "Screw it." If you're like me, you end up playing sloppily and not caring, leaning heavily on your magnificent supply of paws to carry you through a battering. Then you cross a finish line and sometimes earn back more paws than you spent.

As it turns out, both voices were right about this product. The enthusiastic one adored the strong difficulty rating, bolstered by fantastic level design and variety. The fact that every level delivers its own central concept ensures that all sixty-plus stages remain fresh throughout. I appreciated the hell out of it for that reason alone. It had to be difficult for developer Kucing Rembes to dream up that many varying platformer challenges, but to utilize them effectively? That's almost unheard of...

However, my second voice wasn't entirely wrong. The experience eventually devolves into such a hopeless and sometimes clumsy beatdown that you stop caring about perfection and just push through the latter barrage of unfair scenarios. I know hard adventures aim to escalate their challenge factor, one must consider the best way to balance a whole campaign without resorting to sucker punches.

All the same, MagiCat is a fine, feline-based platformer that anyone who digs tough titles should check out. If nothing else, its vintage sensibilities will remind some of us fogies of the mascot-themed products we played as kids, complete with the old-school toughness...

If you enjoyed this MagiCat review, you're encouraged to discuss it with the author and with other members of the site's community. If you don't already have an HonestGamers account, you can sign up for one in a snap. Thank you for reading!

© 1998 - 2023 HonestGamers
None of the material contained within this site may be reproduced in any conceivable fashion without permission from the author(s) of said material. This site is not sponsored or endorsed by Nintendo, Sega, Sony, Microsoft, or any other such party. MagiCat is a registered trademark of its copyright holder. This site makes no claim to MagiCat, its characters, screenshots, artwork, music, or any intellectual property contained within. Opinions expressed on this site do not necessarily represent the opinion of site staff or sponsors. Staff and freelance reviews are typically written based on time spent with a retail review copy or review key for the game that is provided by its publisher.