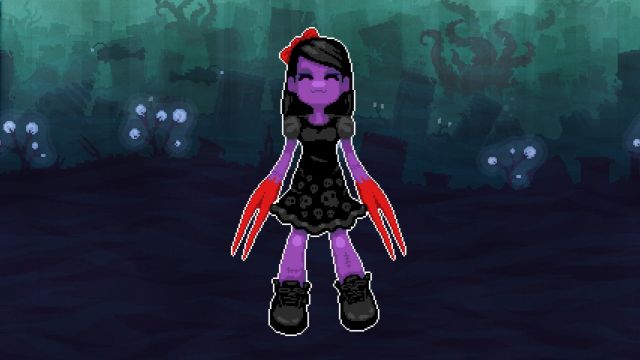 They Bleed Pixels takes you into the heart of the nameless girl's nightmares, where you must run a gauntlet of 2D platformer traps whilst fighting off hordes of shadowy demons, beat 'em up-style. Every blood-soaked inch of the campaign places you in tight arenas, where you run the risk of impalement or dismemberment. Likewise, your opponents must also take care or suffer similar fates. Sure, you can defeat your foes with brute force alone, executing them with a collection of devastating combos, but that's not as satisfying as forcing a flying creature into a spinning blade and watching it explode into bits of gore. Or maybe you'd rather kick one into a bed of spikes and watch its limp body slowly slide down the skewers.

However, combat isn't as cut and dry as I make it sound. Some enemies can preempt you, taking a chunk out of your girl before you can land the first blow. Others, like a certain octopus-like annoyance, fly around the screen and approach you from peculiar angles or rocket towards you at insane speeds. Patience and quick reflexes become your saviors in such situations. The experience grows even more intense once it sends numerous targets your way. I recall one battle, for instance, that involved a few of the aforementioned octopuses and some shambling shadows. After minutes of leaping and sliding back and forth, waiting for openings all the while, I slowly whittled down my competition until all were toast. It was a drawn out conflict, but a challenging, heart-pounding, and satisfying one nonetheless...

Each successful combo or utilization of environmental weaponry fills a meter at the top of the screen. Once full, the meter allows you to create a checkpoint just about anywhere you wish. All you need to do is stand still and make sure there are no enemies or traps nearby, otherwise you won't be able to establish a checkpoint. This is They Bleed Pixels' best feature, as it allows you to play the game at your own pace and establish respawn points more or less wherever you see fit. 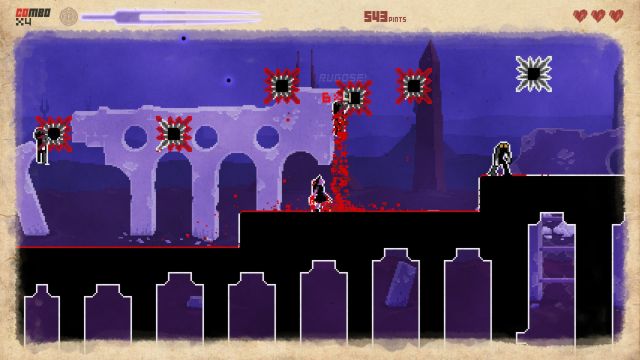 Just to be clear, this is not your standard 2D brawler. Rather, it also tosses in elements of faux-retro platformers, most particularly those akin to Super Meat Boy. Between brutal brawls, you leap over seemingly impossible gaps and avoid the aforementioned sharp hazards. The game throws some truly nasty obstacles your way too, including miles of spikes, moving platforms and high-powered explosives. Some scenes also involve scaling walls, a la Mega Man X. As you might've guessed, you'll encounter a number of sequences where you leap off a floating platform, grasp its edge and jump off that to another chunk of land, sometimes while dodging cutting edges or pesky monsters that assail you mid-jump.

As you advance, obstacle courses become surprisingly complex for a game with such simple mechanics. You'll regularly find yourself leaping from the side of one platform across a wide chasm to reach the side of another platform, all while hoping your arc isn't too high. Otherwise, you'll fly upward into the spikes above you, your corpse becoming a dangling ornament. In some cases, you might need to use combat skills to reach certain areas. One technique, for instance, allows you to dart ninja-style across the screen, bypassing small pitfalls and covering ground more quickly. This is especially handy when dealing with timed doors, which appear frequently.

Sadly, the game sometimes ignores your abilities and sucker punches you with faulty mechanics. For starters, its control response is a touch too sensitive. Although you can get used to its slippery mechanics, getting acclimated is still frustrating. Hell, even in the latter phases of the campaign I often leaped into spikes because I couldn't adequately control my character midair. On top of the irksome control response, the game's collision detection proves questionable at times. Although it's spot on in terms of combat, there were numerous moments when I'd collided with a wall in mid-jump and didn't instantly latch on. Instead I plummeted to my death and had to begin the whole sequence over. More than anything in the game, this issue nearly inspired me to rage quit for a short while, even though I loved everything else. 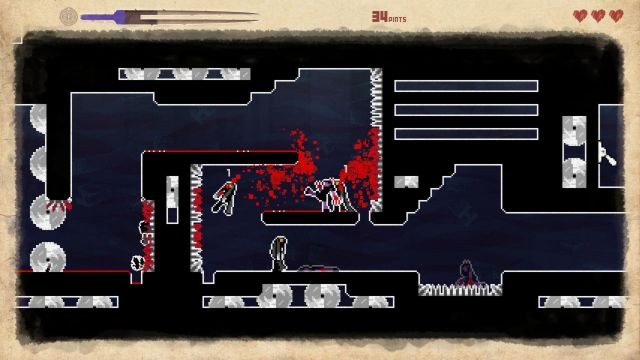 Sadly, the last few stages don't improve much. They throw you through more of the wall-scaling nonsense, watching you squirm and swear each time you fail to find purchase. By the time you reach the end, you're beyond ready for the affair to end.

The experience is definitely cathartic, though. Although the game boasts a strong difficulty that only the most masochistic of gamers can appreciate, it's somewhat soothing to kick your opponents upward into saw blades and watch their bloody pieces rain back down. I also find it satisfying to complete a particularly tough platform sequence and dust my hands off. Never mind that it took me over one hundred deaths to succeed, I still felt like a pro. 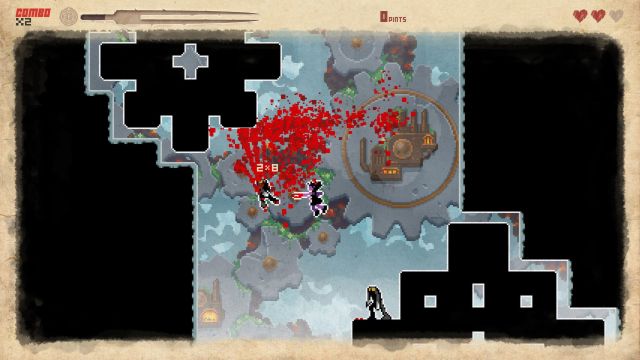 They Bleed Pixels is yet another platformer that provides you with an unlimited number of chances to succeed. I can't even begin to imagine if this game gave you finite lives--or worse, finite continues. As I see it, games this tough offer you infinite lives for a good reason. Developers know that adventures like this are addictive, they know you're going to be up all night trying to finish a particularly rough level, and they know you're going to keep telling yourself, "Just five more minutes!" for hours. An unlimited number of lives is an open invitation to play until you sink into a Lovecraftian level of madness. Of course, the game's collection of expertly built stages, boatloads of action and messy kills help aid it in becoming all the more addictive, even when its flaw nails you with questionable collision detection...

If you enjoyed this They Bleed Pixels review, you're encouraged to discuss it with the author and with other members of the site's community. If you don't already have an HonestGamers account, you can sign up for one in a snap. Thank you for reading!

© 1998 - 2023 HonestGamers
None of the material contained within this site may be reproduced in any conceivable fashion without permission from the author(s) of said material. This site is not sponsored or endorsed by Nintendo, Sega, Sony, Microsoft, or any other such party. They Bleed Pixels is a registered trademark of its copyright holder. This site makes no claim to They Bleed Pixels, its characters, screenshots, artwork, music, or any intellectual property contained within. Opinions expressed on this site do not necessarily represent the opinion of site staff or sponsors. Staff and freelance reviews are typically written based on time spent with a retail review copy or review key for the game that is provided by its publisher.