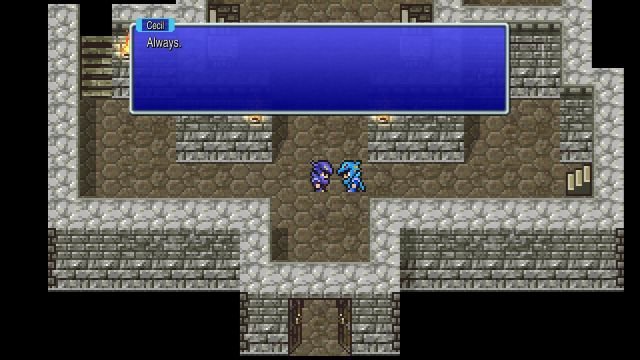 I never thought I would say this in a million years: I prefer the Pixel Remaster version of Final Fantasy IV over any other release.

Where some Pixel Remaster titles saw tweaks to their balancing to make them more generally palatable or casual, IV didn't receive quite the same treatment. From what I can tell and what further research has supported, individual stats for characters and enemies haven't changed much, if at all. Most of the foes you meet are just as tough as they were in the US PlayStation release, with even the final boss proving to be as cheap as ever. Yes, he still hits you with two nuke attacks in quick succession, and you need to be powerful enough to survive both blows...

Here's the thing: your characters only require half the experience to level up that they needed before, plus the encounter rate is significantly lower. As you can imagine, this update cuts back on grinding drastically. Unfortunately, some folks won't prefer this change because it effectively robs the game of its survival elements, such as utilizing the Osmose spell frequently to replenish you MP while on a long journey.

Honestly, my biggest complaints with IV included its ridiculous encounter rate and tiresome grinding. In some dungeons you'd literally win a fight, take one or two steps afterward, and already bump into another monster. You'd endure all of this to make it to a boss showdown that proved to be overwhelming and would send you doubling back to an area where you can pack on enough experience points to maybe stand a chance. This point for me was always the optional battles against Asura and Leviathan, which practically required me to know the spells Reflect (formerly "Wall") and Thundaga (formerly "Bolt 3"). And even then, I needed to possess the best equipment I can lay hands on, plus high enough statistics to survive their onslaughts while dishing out damage in return. 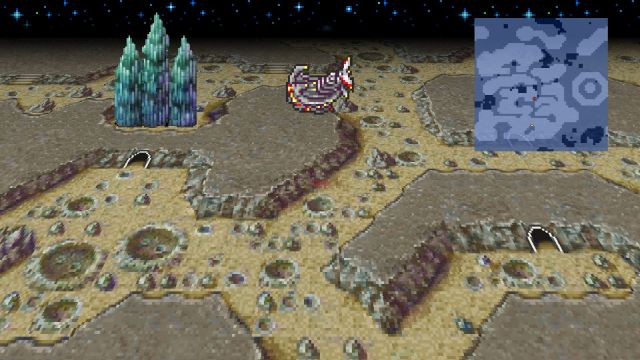 This always led to a hefty chunk of tedious, repetitive slaughter that occupied way too much of the campaign's overall play time. I was ready to be done with the game entirely by the time I was powerful enough to win those scuffles, which doesn't bode well when you consider I still had multiple plot beats to tackle, plus a handful of other grinding sessions so I could survive against the likes of Odin, Bahamut, the main antagonist, and the hidden bosses contained within his fortress.

With the Pixel Remaster, none of that nonsense is an issue. Yes, you still have to grind occasionally, but such sessions don't last even close to as long as before. The best part is you can prepare for just about any occasion by fighting every adversary that comes your way rather than retreating. During my own playthrough, I didn't spend any extra time preparing for Asura, and the only thing I needed to do before battling Leviathan was learn Thundaga. He still gave me a run for my money, but at least I didn't spend days to get to that point...

Pixel Remaster's lack of constant grinding accomplishes two terrific feats, the first of which is that it allows you to focus on IV's strengths like never before.

Without the long, constant killing for personal betterment, you get to experience its plot and side quests in a less fragmented format. You don't witness one cutscene only to spend ages bolstering your crew, just to get to another dramatic segment long after you might've forgotten what's going on--and that's assuming you didn't lose interest and give up mid-grind. 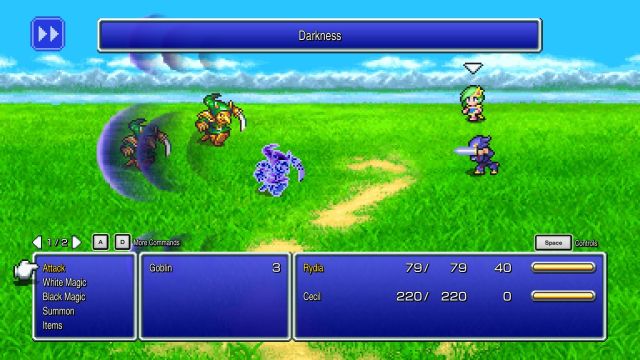 IV was one of the games that hopelessly sucked me into the RPG genre. I appreciated the category before, but I didn't fully love it until playing this game way back. It stepped up the genre's penchant for melodrama by adding more flair and climax to cutscenes than many previous titles did. Granted, it wasn't the first RPG to do this, but it was among the first to really stand out in the west.

The game follows the adventures of a dark knight named Cecil, who uncovers an imperialist conspiracy within his own kingdom. Of course, something darker and more sinister lurks behind the scenes, prompting Cecil to band together with others who share his motives of restoring the world to its rightful order. Along the way, he meets a varied cast of characters, including a dragoon named Kain, his love interest Rosa, a summoner called Rydia, the sage Tellah, and even a pair of magic-slinging twins who go by Palom and Porom.

The first third or so of the campaign consist of a linear progression across a couple of continents, where dramatic events unfold that change the shape of your party. You start off as merely a duo before an earthquake separates you from your partner. Not long after that, you gain two new allies, only to bump into another tragic segment involving a spoony bard. That scene leaves you without your main magic user, but you also gain the aforementioned musician as a party member. In other words, you don't get much of a choice who joins your team throughout the storyline. Character come and go, and sometimes come back (and go again). I always appreciated that about this Final Fantasy installment. You don't collect friends in this one; they come and go throughout your journey, just as they might in real life. 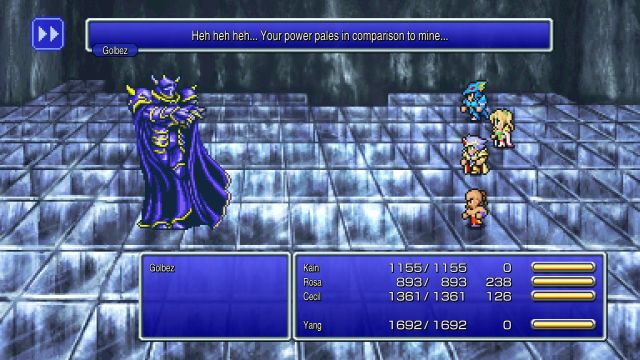 This offering's main hook was that its story remained thoroughly compelling, and that was supposed to be enough to get you through moments where the difficulty rating spiked. You'd enter a new dungeon and the enemies there would tear into you more fiercely than the previous ones would, forcing you to upgrade your party through exhaustive, turn-based battle. Meanwhile, the stages you entered offered elaborate designs that begged for exploration and handsomely rewarded you with powerful (and sometimes unique and missable) equipment and useful consumables. Impressively, these areas mostly relied on their layouts as their selling points, as only a few of them featured gimmicks, such as doors that turn into enemies and damaging floor tiles. Mostly, the game wowed you with design over novelty.

Of course, you encounter scripted battles, and this is another department where Pixel Remaster shines. Since it's easier to gain levels here, you now see some key boss encounters for what they really are. Some villains fall if your stats are high enough, and strategy be damned. These moments are only meant to serve as gates, so to speak, ensuring that you've crossed a high enough level to advance the tale. Since beefing up happens more quickly here, the game doesn't feel so strictly gated. Others, however, like Asura, Calcobrina, Cagnazzo, and the Magus Sisters force you to plan rather than rely on might alone. For instance, Asura constantly heals herself, and you must find a way to prevent that. Maybe you have a support spell that could bounce her magic off of her and apply it to you instead... Check your magic inventory carefully...

Ultimately, Final Fantasy IV Pixel Remaster allows you more room to breathe. Granted, some traditionalists are likely to be turned off by the added ease, and I can't fault them for that. All the same, cutting back on grinding and encounter rates was the right call, and I applaud Square Enix for actually improving the right thing in a Final Fantasy remaster rather than merely rebalancing the affair and calling it a day.

If you enjoyed this Final Fantasy IV Pixel Remaster review, you're encouraged to discuss it with the author and with other members of the site's community. If you don't already have an HonestGamers account, you can sign up for one in a snap. Thank you for reading!

© 1998 - 2022 HonestGamers
None of the material contained within this site may be reproduced in any conceivable fashion without permission from the author(s) of said material. This site is not sponsored or endorsed by Nintendo, Sega, Sony, Microsoft, or any other such party. Final Fantasy IV Pixel Remaster is a registered trademark of its copyright holder. This site makes no claim to Final Fantasy IV Pixel Remaster, its characters, screenshots, artwork, music, or any intellectual property contained within. Opinions expressed on this site do not necessarily represent the opinion of site staff or sponsors. Staff and freelance reviews are typically written based on time spent with a retail review copy or review key for the game that is provided by its publisher.