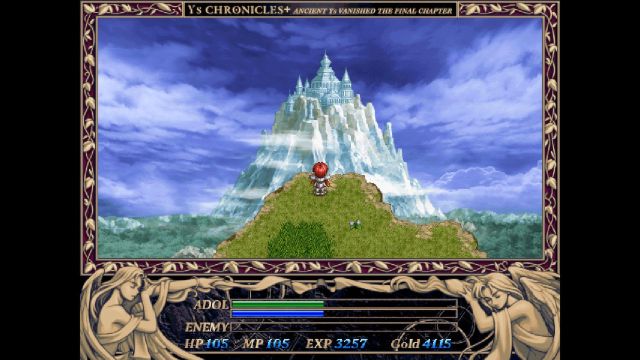 It seems we're destined to play the same games in an endless loop. Every time technology advances just a little, we can expect familiar monikers to creep out of the shadows and entertain us once more, usually in an "enhanced edition" format. This phenomenon isn't exclusive to way older titles, either. How many times since 2011 have we seen updated releases of Skyrim? Or how about Grand Theft Auto V? Hell, even back in the '90s, Street Fighter II continuously received spanking new revamps, some of which never made it outside of Japan.

There's one other surety you can count on: the great-grandfathers of the console RPG craze always return in some form. The Ys franchise especially has been on a roll with re-distributing older titles that fans may have missed. The series' primary duology in particular received a lot of remake love over the years. Initially shipped out as separate entities, these two games hit scores of older platforms, including Famicom, Sharp X1, NEC's PCs, and MSX2. Eventually, the two came together in a complete edition for PC Engine/Turbografx-CD under the title Ys Book I & II. Since then, the pair saw numerous nip/tuck treatments, reemerging with rejuvenated visuals and ripping modern soundtracks.

I'll be honest: I can't be bothered to play every new iteration of the two for comparison purposes. I would be playing primary Ys games until I die. Instead, I've decided to settle for the 2013 incarnation, Ys I & II Chronicles+, which itself offers an improvement over its own initial 2009 "non-plus" release.

While this version is just fine, it still comes with its share of issues and dated concepts, especially in the case of the first outing... 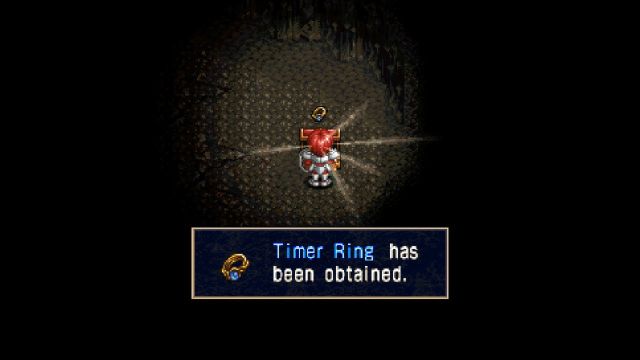 One thing you should know about the Ys titles: it mostly doesn't matter which order you play them in. Plus, you can easily miss some installments and not be lost in any given storyline. Granted, you might not experience as many "Oh!" moments when old faces return from previous adventures. For instance, if you skip Ys I, you won't meet Raba, and therefore bumping into him in Ys VI: Ark of Napisthim won't give you the same chill it otherwise would. Nonetheless, each story is pretty well contained, despite being part of a unified timeline centered on the travels of its bold protagonist, Adol Cristin.

That said, you can't get into Ys II without first crossing its predecessor off your list because the two games are intertwined. II is a direct continuation of I's campaign, so beginning with the better of the two games will only confuse you. It's unfortunate, really, because playing through Ys I these days proves a creaky experience... Don't get me wrong, though; it's a playable, laudable adventure, just not a great one.

For one thing, the game utilizes the old Hydlide form of combat, which involves colliding with your opponents to deal damage rather than manually swinging your sword. Unlike that even creakier RPG, I improves upon the concept by allowing you to mitigate damage depending on your approach. If you nail an enemy head on, you will sustain damage as well as the creature you bump. However, off-center or flanking hits deliver punishment without taking it in turn. 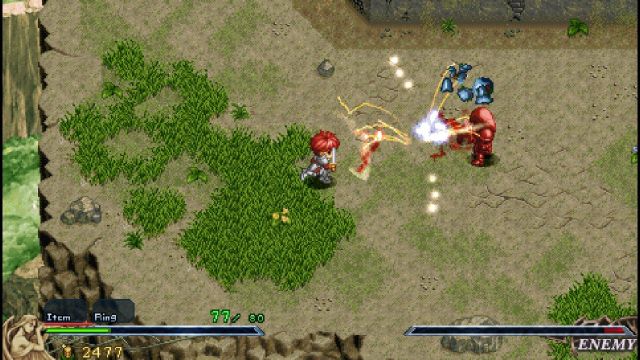 Your first hour or two consists of little more than grinding and exploring. You wander aimlessly, dispatching beasts for meager experience and cash, hoping to secure enough of the latter to afford the best equipment on offer. The good news is that with each improvement, you absolutely see results. Ys isn't keen on forcing you to work your ass off so it can toss you a trifling stat increase. Any time you level up or grasp new weaponry, it's noticeable. You live longer, kill faster, grind harder, and become the badass Adol is destined to be.

You may immediately notice that the soundtrack also received a gracious facelift, supplementing its previously synthesized themes with ripping guitar solos and retro metal-infused tracks, not to mention faux-orchestrated pieces that slap just as hard. Each BGM captures their given moods perfectly, but the samples with guitar work written into them just scream "modern Ys."

After you've gotten your bearings, there's little left to do except speak with townsfolk and embark on your journey. Unlike today's RPGs, I doesn't take you by the hand and lead you to the next campaign beat. Instead, you gather intel and use it to determine your next destination, just like any other early console RPG. However, I offers a world design that's a cut above its brethren. You don't land in a vast realm with tons of locales scattered all over the place, searching tirelessly until you stumble upon a lead. Instead, the game provides a pretty tight map featuring locations that are easy to find. Plus, you can determine whether or not you're ready to enter a dungeon based on how you handle its denizens. For instance, if you deal zero damage or immediately perish against an area's first monster, you know you're not ready.

Eventually, your travels take you to the Darm Tower, which takes up roughly half of the storyline. By this point, the adventure shifts from a free-roaming quest to a straightforward crawl through a massive fortress. The change in direction proves a bit jarring, as you wonder when you'll leave the tower to continue charging across the open plains. You never do, though...

It's here that some of I's shortcomings come to light. For one thing, your levels cap at ten. It isn't long before you reach your full potential, even gaining the ultimate equipment. By that point, battle devolves into an inconvenience rather than a mechanic used to grant you additional power. You actively avoid fights as a result, which doesn't bode well for an action-RPG. 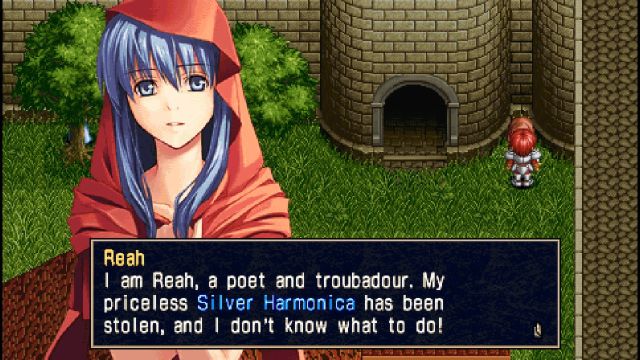 Things only worsen when you encounter the final few bosses. During this time, you realize that I's hit boxes are a bit wonky. You'll see Adol cross what should be a villain's weak point, only to deal no damage. Other times, you'll swear you dodged a blow, but your hit points diminish anyway. This is to say nothing of the tiresome strategies you use to win some of these altercations, as a few of them boil down to war of attrition.

The worst of all is the also the series' most iconic showdown: Dark Fact. He bounces all over the limited arena in which you meet him, throwing projectiles. Worse yet, a piece of the floor permanently disappears every time you slice him. You end up creating impasses over time, so you need to be careful not to paint yourself into a corner, so to speak. The thing is Dark moves so quickly and seemingly erratic that, when coupled with the weird hit boxes, it's nearly impossible to keep track of the floor while reliably attacking. Ultimately, you repeatedly die and retry, hoping to get lucky just once.

Oh, and if you happen to be standing on a piece of the ground when it gives way, you automatically croak.

If you persevere, you should eventually overcome the antagonist and watch as the credits roll. Ys II, doesn't kick in immediately with this duo. Instead, you must install it and launch it separately. None of your data carries over to the new game, either. More than anything, you can just be glad you're done suffering through this merely average offering. At least its soundtrack was killer... 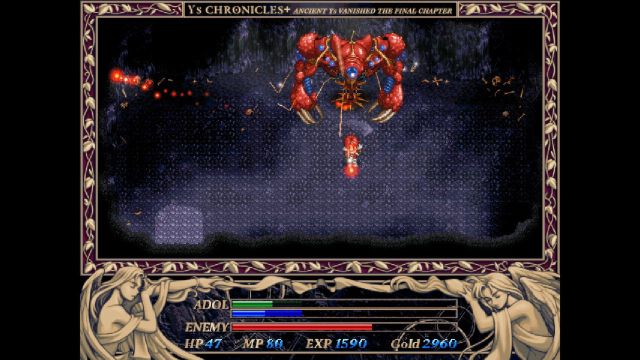 Forget most of what you know about Ys at this point. You still collide into enemies, albeit with improved hit detection this time. However, you now no longer wander aimlessly because this campaign's design is more linear. Oh, and have magic now. No more solely jousting the opposition, as you launch fireballs that effectively eliminate anything in their path.

That's not all: your level cap has increased well beyond ten. Unless you subject yourself to an inhuman amount of grinding, you won't likely reach the top before the journey's conclusion. As a result, this installment feels much more modern and less experimental. It's as though Falcom found their voice and knew which direction to take.

Ys II seems bumpy at first because you leave almost everything from the first title behind and basically start from scratch. You meet a whole new slew of characters and chat with townsfolk who offer up improved advice in regards to advancing the plot. They pretty much point you in the direction of your next objective, which always leads you to a maze-like patch of land or dungeon. 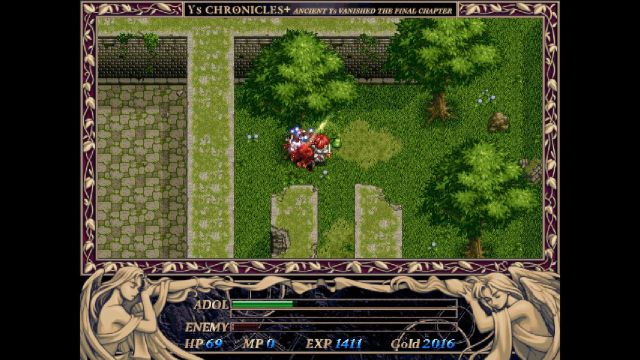 Here, the main challenges you face manifest as convoluted stages packed with feisty beasts. You not only toil trying to keep track of which pathways you've investigated, but also work to bolster your stats so you can survive the various onslaughts. An early-game temple comes with numerous doors and hallways that lead to other doors and hallways, even sometimes looping back around. Personally, I had to draw myself a map to keep from getting lost, like I was playing a game from 1991 or something. Another level later on thrusts you into a snowy mountain decked out with hidden passages, interconnected caves, and icy slopes that require special footwear to climb.

Without fail, most new enemies you encounter knock off hit points with ease, so you constantly find yourself battling to level up or farm gold to buy new equipment. The main difference between this title and many other JRPGs is that grinding isn't so time-consuming. Action remain swift throughout because it's all real-time, strengthened by Adol's quick movements and a generous array of rewarding adversaries to knock off.

Best of all, boss encounters don't come across as haphazard or poorly planned. You utilize strategies that don't necessarily including "winning via attrition" or "hoping luck is on your side." You often watch monsters' patterns, learn to mitigate damage, and concentrate your magical projectiles on particular weak points.

II leans hard into its own best qualities and pretty much makes up for I's aged performance. Its pacing remains snappy, its mechanics stay solid, and its play control constantly proves tight and responsive. This is basically the kind of game I imagine when I think of good, old school action-RPGs. 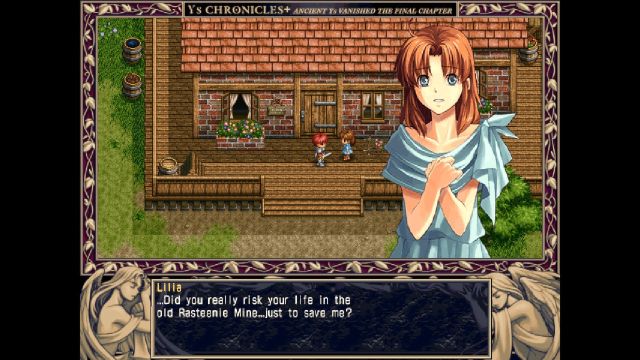 Sadly, though, this classic pair is beginning to show its age. I still love this franchise and I look forward to finally getting around to the episodes I missed and checking out future iterations. Really, these remakes mainly seem to exist for long-time players. I'm not sure how well this will whet the appetites of new entrants to the Ys brand, but anyone pining for slightly updated takes on older classics should check these two out, even if the first one is a bit dusty. It's either that or tackle the previously discussed TurboCD version, which holds up terrifically.

If you enjoyed this Ys I & II Chronicles+ review, you're encouraged to discuss it with the author and with other members of the site's community. If you don't already have an HonestGamers account, you can sign up for one in a snap. Thank you for reading!

© 1998 - 2022 HonestGamers
None of the material contained within this site may be reproduced in any conceivable fashion without permission from the author(s) of said material. This site is not sponsored or endorsed by Nintendo, Sega, Sony, Microsoft, or any other such party. Ys I & II Chronicles+ is a registered trademark of its copyright holder. This site makes no claim to Ys I & II Chronicles+, its characters, screenshots, artwork, music, or any intellectual property contained within. Opinions expressed on this site do not necessarily represent the opinion of site staff or sponsors. Staff and freelance reviews are typically written based on time spent with a retail review copy or review key for the game that is provided by its publisher.