Having superpowers would be pretty awesome, am I right? Being able to shrug off injuries that would cripple or outright kill a normal person, having the ability and agility to travel in ways you never could before and, of course, being able to instantly incinerate people who prove to be just a bit more annoying than you're in a mood to tolerate before retreating to your fortress to collect the tribute owed to you by all those unpowered weaklings who damn well better have gained some awareness of what's what.

But if you look beneath all those positives, a few negatives could be discovered. What if you gained those powers via a mysterious package that generates a massive explosion and destroys a large chunk of the city you call home? And what if that explosion kills a ton of people, including your girlfriend's sister? Or, how about when that girlfriend finds out you're somehow responsible for her sister's death, putting a huge strain on your relationship and leaving you with only the company of your best friend  a guy who alternates between telling you how awesome you are and being openly envious of how you have cool powers and he doesn't. Oh! Let's definitely not forget how that explosion led to the government quarantining the city due to how how a great deal of the survivors have leveled up with one power or another, with many of them joining gangs in order to battle for supremacy.

All of this happens to Cole MacGrath in the early stages of PlayStation 3 action title inFAMOUS, with the rest of the game exploring how he responds to the good of having great powers and the bad of, well virtually everything that's unfolded in his life since that package exploded. When you start up a new game, that event happens and you have to escape "ground zero". After that? It's an extended battle for the future of Empire City as you travel through each of its three districts to fight gang members, do various side quests and determine whether Cole's mindset is more like Superman or Homelander. 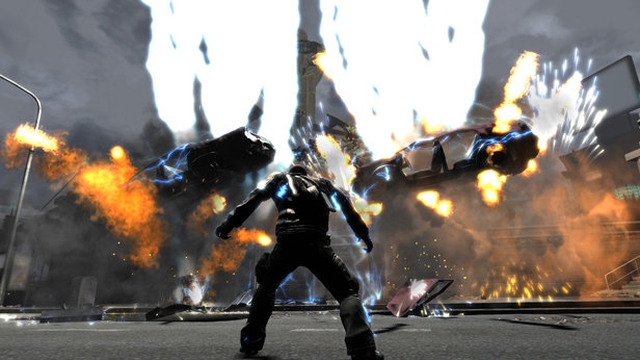 A morality system is one of inFAMOUS' draws. Oftentimes, as you're doing both mandatory and optional quests, the action will stop and you'll get a choice with good and evil outcomes. Give food to the people or keep it for yourself. Do something nice for people and get a small reward or simply kill them to take everything they have. One choice will move Cole's meter towards the heroic side; the other takes it down the villainous path. How Cole completes missions also can have an effect as well. After all, having a bunch of civilians routinely get turned into collateral damage whenever he hikes down the street isn't exactly going to convince the populace that he's a lovable teddy bear!

These choices do have all sorts of consequences. The city's other survivors will try to help a heroic Cole, often distracting enemies by throwing rocks at them. If Cole is a bad, bad manwell, those rocks might be smacking into his head instead. Also, Cole gains all sorts of electricity-based powers throughout his adventure. Ones gained via the evil path tend to be more destructive and wide-ranged, while on the good path, he'll attack with more precision in order to minimize the damage to people he's not trying to blast.

The main power he'll have is the ability to constantly fire electric bolts from his hands, although he'll regularly gain others, such as the ability to cause shockwaves, make electricity grenades and even summon lightning from the sky. The bolt is a free power, while most of the others drain his electricity, necessitating that he recharge in order to be able to use them more than a handful of times. Fortunately, Empire City is loaded with all sorts of electrical devices which can be used for that purpose. A few missions even give him access to electrical surfaces, allowing him unlimited uses of his best powers, at least as long as he remains on those platforms.

The many missions that Cole will complete come in two forms. Story missions will advance him through a plot that winds up being far more complex than "stop the evil gangs" and tend to come from others. A governmental agent, Moya, regularly gives him orders while dangling the carrot of possibly allowing him out of Empire City if he does what she wants. Best friend Zeke and "kinda, sorta, it's complicated" girlfriend Trish also occasionally request his help. Trish is big on him doing stuff beneficial to the community, such as help distribute medical supplies; while Zeke, is real keen on Cole doing stuff that, uh, might impress a woman he's hoping to hook up with. 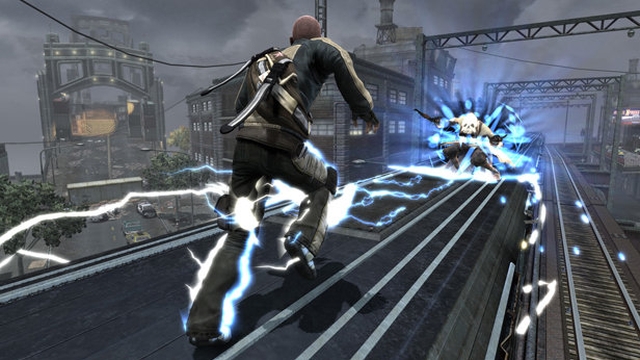 Side quests are shorter and tend to consist of a particular challenge. Take out some gang members, rescue some captive hostages, disable a bunch of surveillance equipment attached to a building and the like. While all of these are optional, they do have their benefits. You'll gain experience towards improving your powers from them and each one you complete will reclaim territory in its district from whatever gang inhabits it.

That is a huge positive as it greatly diminishes the number of gang members that will accost you when you're trying to get places. Mainly because a lot of those criminals like to hang out on top of buildings and snipe you with near-divine accuracy. Man, I can understand this when you're in the final district and fighting the First Sons  essentially a rogue military group  but the gangs in the other districts consist of brainwashed small-time criminals and insane homeless people and I highly doubt those sorts should be able to consistently hit a moving target from long distance. But they can, causing one to really be thankful that inFAMOUS is one of those games where you recover from damage simply by avoiding taking more for a few seconds.

Other than that, I'd say my issues with this game revolved around some of the quests. A few side quests get repeated a bit more often than I'd like and/or have annoying hooks to them. For example, one in the second district just sucked. You had to rescue someone who was forcibly "recruited" into the homeless person gang. Which leads into a four-on-one fight where you can't attack one of that number, with the only clue to his identity being that he's not dressed the exact same as the other  a really fun thing to determine when you're trying to defeat the others before eating 20 bullets.

There also is a bit of tedium with a few main quests. You'll have six or seven quests requiring you to head into the sewers and turn on the power to part of the city, gaining new abilities in the process, which all play out much the same. And, as per the norm in video games, escort quests can be a real slog. I can say with certainty that I will not soon forget one that had me helping out Trish by escorting a large, slow-moving vehicle for a LONG time while constantly having to fight off foes  many of whom were wielding rocket launchers. Cole might have super powers, but he's not that much better at absorbing a rocket to the face than a normal person, so that little journey led to a lot of rage.

inFAMOUS might be a bit flawed, but I still had a generally good time playing through it. There are a lot of things to find in a decent-sized city and a few nice plot twists. I might not consider it an all-time classic or anything like that, but I did have fun far more often than not and my overall opinion was positive enough to convince me that it'd be worth my while to continue on with the series. I mean, yet another series to go through is probably the last thing I need, but that's where I'm at!

If you enjoyed this inFAMOUS review, you're encouraged to discuss it with the author and with other members of the site's community. If you don't already have an HonestGamers account, you can sign up for one in a snap. Thank you for reading!

© 1998 - 2022 HonestGamers
None of the material contained within this site may be reproduced in any conceivable fashion without permission from the author(s) of said material. This site is not sponsored or endorsed by Nintendo, Sega, Sony, Microsoft, or any other such party. inFAMOUS is a registered trademark of its copyright holder. This site makes no claim to inFAMOUS, its characters, screenshots, artwork, music, or any intellectual property contained within. Opinions expressed on this site do not necessarily represent the opinion of site staff or sponsors. Staff and freelance reviews are typically written based on time spent with a retail review copy or review key for the game that is provided by its publisher.