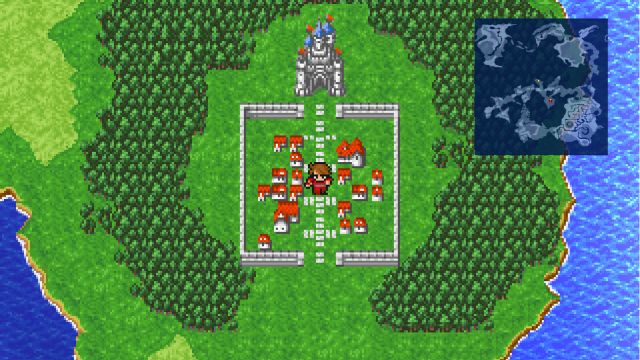 I told myself I would never again play a "new" version of the original Final Fantasy (henceforth called FF because I'm lazy). Then, Square Enix tricked me. They repackaged the game once more, except this time with "remastered pixels" so its presentation didn't look like cat puke on HD screens. Honestly, visuals were the least of my worries in regard to the premier entry of this series. I only hoped that the devs would preserve the classic's best parts while tossing in some QOL improvements.

They almost pulled it off...

I played FF on my old NES back in the day and enjoyed it well enough. Over the years, though, I had a difficult time getting back into it mainly because of its sluggish pacing. My party crawled slowly through dungeons, took eons to end encounters, and ground for what felt like months just to feel worthy of even glancing at one of the campaign's major bosses, the Elemental Fiends.

The original one doesn't play out like your contemporary FF titles. It's more like a simplified, single-player D&D campaign. You assemble a quartet of warriors, each with their own class, and voyage together to save the world from the aforementioned villains and their mastermind. For the most part, you find your way from one dungeon to another, scotching D&D-inspired beasts in turn-based combat while earning experience. Plot beats dispensed of less chatter and dialogue than the franchise's later installments, consisting mostly of townsfolk filling in the world's lore while guiding you through your quest. 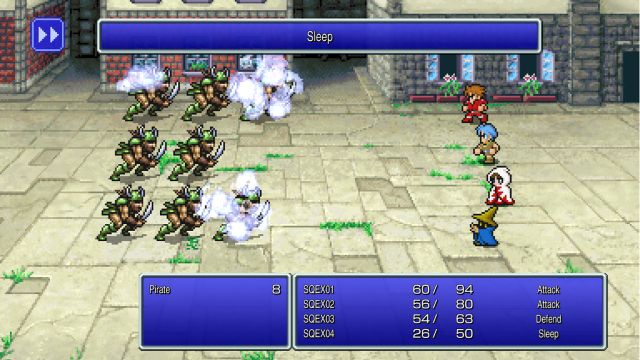 And as with some of the early D&D video games, this one was ruthless. Your mages didn't acquire the ridiculous amounts of magic points they receive nowadays, instead only earning up to nine points per tiered level of magic. Each tier bears four white and four black spells, but mages can only learn three spells per magic level, forcing you to choose wisely. Additionally, you had to be sparing with your MP and consumables, which was tricky when the game regularly wore you down. It also didn't help that your attacks could be rendered "ineffective" if you send someone to strike a foe and it perished before you took a swing. Basically, your warrior ends up chopping at the space the creature used to occupy, probably feeling about as smart as the corpse before them.

Perhaps the worst feeling in the world came when you perished in battle after spending an hour or more slogging through a dungeon. You might think, "No biggie, I'll just respawn at the save point." Did I mention that the "save points" here are inns? No, you don't save on the world map and there are no campfire sites in dungeons. If you die, you must trudge all the way back from the last town you visited, and that's assuming you remembered book a room.

Square Enix had to have known these features bugged some folks because subsequent iterations either did away with them or revamped them. Over the years, they've remade FF numerous times, and only the PlayStation release came close to offering an authentic take on the face-crushing debut. That build allowed you to run, came with more slightly swifter battles, and didn't render you attacks ineffective if your target expired. Of course, these "fixes" appeared as special options you could toggle. The game didn't expect you to play by its new rules, allowing you to pick and mix as you see fit. Sadly, this rendition also bore its share of issues, namely lengthy load times that rendered other speedier features moot. 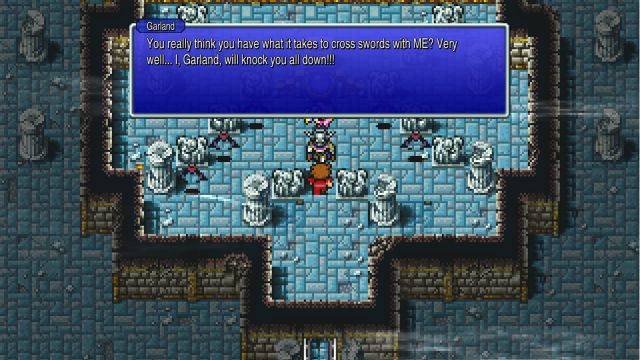 This was essentially what I wanted from the PC Pixel Remaster: a game that was both challenging like primary edition, but more streamlined and loaded with QOL options that allowed me to customize my experience. Sadly, that's not what I got...

Pixel Remaster does a fine job of updating visuals and music. Holy smokes, the battle theme is fantastic, and the updated boss BGM is something I would listen to while working out. Plus, as promised, the graphics don't look like total ass on my monitor or Steam Deck. I guess I'm okay with all of these upgrades, but they're not really what I was looking for...

This addition to the FF re-release saga doesn't offer "special options" like its PlayStation cousin. It completely nixes the "ineffective attack" system, of which I personally wasn't a fan because it doesn't make logical sense. However, I know a lot folks dug this component because it made for a more uncompromising experience. Even though I don't miss this concept, I'm a little irked it wasn't at least offered as a toggling option as it was before. Why get rid of it altogether? 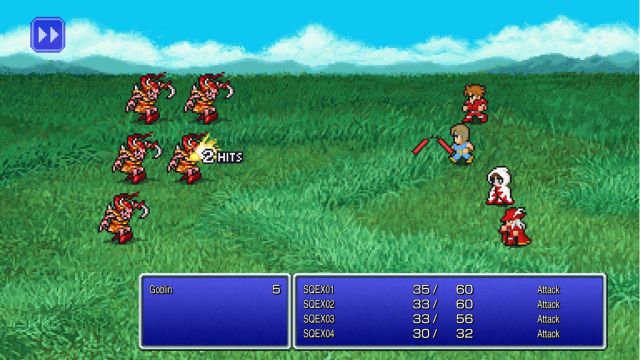 On the flip side, random battles fly by like never before. You don't have the awkward moments of waiting for each character on the board to painstakingly execute their maneuvers. Instead, you select your commands and the fight rages expediently, whisking you into the next round or off to victory. You also don't spend ages grinding or moseying about stages because the mechanics don't slither along at a snail's pace.

As you might've guessed, the "only save your file at inns" thing doesn't emerge this time around. Here, you can save anywhere on the world map or "quick save" in any time outside of combat.

Sadly, Pixel Remaster also snatches a page from the Dawn of Souls book by reworking the game's balancing without providing the option to tweak its difficulty ratings yourself. Granted, this outing isn't as easy as the Game Boy Advance disaster, but it's still simple enough that you can wipe out each of the Fiends within a few turns. I can't say exactly what changed; all I know is that my warrior and monk one-shot just about every standard monster, Fiends perish with almost no fuss, and leveling is effortless. 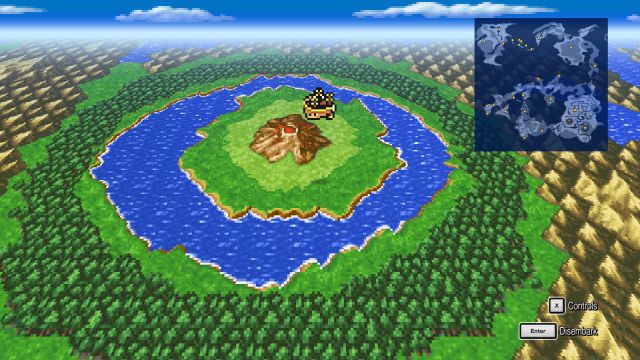 For some folks, this is a good thing, and I'm glad for them. However, as with the ineffective attacks, Pixel Remaster should have offered a customizable challenge factor. That way, folks looking for a breezier roleplayer can experience this title without having to spit their teeth out, and folks used to the original's iron-fisted tactics won't snooze through this one.

All I'm saying is this remake is just about unnecessary. Why bother going to all this trouble just to make the game appear all spruced up without providing a wealth of options? Let the folks who want an easier FF get it, and let those who desire the old balancing have that, too. Allow people to pick and mix this experience so they can play it the way they want, just as they could in the PlayStation era. More than anything, Pixel Remaster represents a huge missed opportunity to welcome new fans while reminiscing with old ones. Or, as in my case, give some old fans the revamps they want while dialing back the qualities we may not have asked for.

I say if you want to trounce Chaos into the mud without breaking a sweat, you should be able to. If you want spells to cost ridiculous amounts of money, so be it. If you want your party to foolishly lash at the empty space their previously living target inhabited instead of redirecting their attacks like sane people, then let it be so. Stop selling us the same slightly tweaked revisit and give the world the custom edition it desires.

If you enjoyed this Final Fantasy Pixel Remaster review, you're encouraged to discuss it with the author and with other members of the site's community. If you don't already have an HonestGamers account, you can sign up for one in a snap. Thank you for reading!

© 1998 - 2022 HonestGamers
None of the material contained within this site may be reproduced in any conceivable fashion without permission from the author(s) of said material. This site is not sponsored or endorsed by Nintendo, Sega, Sony, Microsoft, or any other such party. Final Fantasy Pixel Remaster is a registered trademark of its copyright holder. This site makes no claim to Final Fantasy Pixel Remaster, its characters, screenshots, artwork, music, or any intellectual property contained within. Opinions expressed on this site do not necessarily represent the opinion of site staff or sponsors. Staff and freelance reviews are typically written based on time spent with a retail review copy or review key for the game that is provided by its publisher.