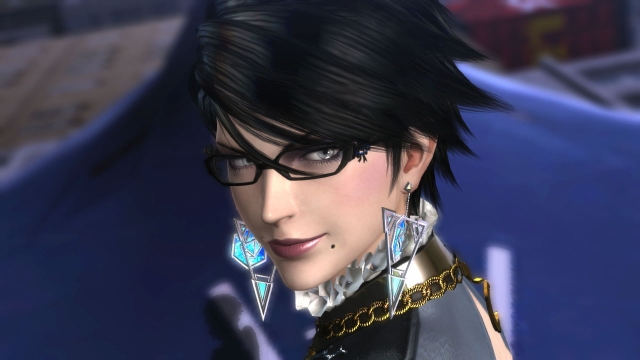 How do you top Bayonetta? This is a game starring a curvaceous, bespectacled witch who beats the tar out of angels, cracks jokes, and uses her ludicrously long hair to summon demons that maul her adversaries. It's basically Devil May Cry, except trade its wise-cracking man with a wise-cracking woman, its forces of evil with heavenly beings, and toss in more generous helpings of ridiculous action and comedy. The original entry is an action-packed, silly romp and a tough act to follow. Even if you could successfully recapture the debut's magic, then what does that entail for future installments? Yeah, that's sequel escalation for you...

And yet, somehow Bayonetta 2 narrowly tops its predecessor, and the world is all the better for it.

This successor begins in grand fashion, with the titular heroine Christmas shopping with her assistant, Enzo. However, they hardly finish purchasing packages for Enzo's kids before jets soar through downtown, paced by angels looking to pick a fight. Bayonetta and her confidant Jeanne hop into action, landing on the back of an aircraft to pound the forces of light into holy goo. At this point, the game eases you back into its mechanics, where different attack combinations execute a variety of flashy, wicked maneuvers and combo strikes.

That's not all: you can trigger "Witch Time" by dodging a blow at the last moment. This feature slows everything except you to a crawl for a few seconds, allowing you to dish out extra punishment without the fear of retribution. You also build up a magic meter with each hit, eventually using it to torture your victims with devices that appear out of thin air, or temporarily bolster your damage output enough to crush weaker foes or severely injure beefier fiends. 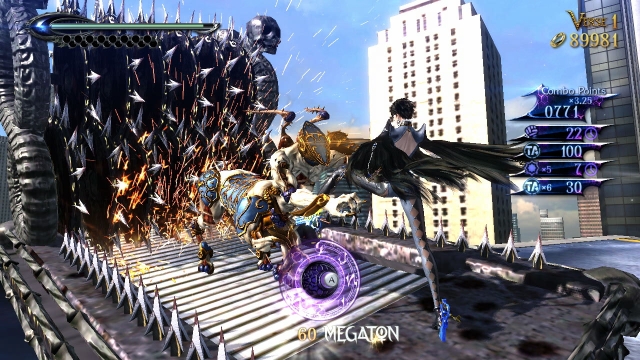 After bashing your foes in the opening sequence, you hit a cutscene that sets up the plot and plops you into a battle with a hellish dragon on the side of a skyscraper. Yes, hellish. As it turns out, it's not just divine ones that are pissed with Bayonetta this time around, but also demons.

So Bayonetta travels to the city of Noatun to undertake her new mission, a trip that literally drags her through Hell. Just about every level of the campaign finds some way to surprise you. Early on, you travel through the streets of Noatun, only to witness their destruction during an apparent quake. You realize it's not simply a seismic event when a massive, holy serpent bursts from the ground and takes to the skies. And yes, you eventually fight the thing. At one point, you stand on a falling bit of debris among the clouds, smashing your gun-laden boots and swift fists into its cherub-like face. Hell, that's not even getting into the junk she can do with her magical hair, weaving it gigantic stilettos or monstrous maws that clamp down on prey for extra damage and over-the-top effect.

And how else do you cap that encounter off except by conjuring a demoness who repeatedly stomps her hefty heels into the head of your sizable opponent, eventually blasting him through the aforementioned debris and down toward the earth at screaming speeds? 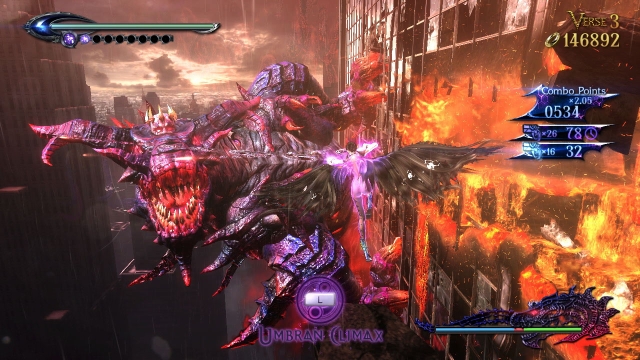 Later on, you battle another serpentine beast, only this time you surf on a busted piece of masonry, catching waves in a watery whirlwind that stretches into the sky. You dodge humongous chunks of buildings and various other bits, just before sprouting wings and soaring into an airborne fight scene to give the snake the thrashing of its existence.

I could go one for ages about battling in a demonic manta ray's gullet or taking on one of the major antagonists of the tale while your respective summons duke it out in the background, but I don't want to spoil too much. The minor drawback to all of this awesomeness it that the game's cinematic nature sometimes gets in the way of timing, preventing you from hitting a Witch Time just right or mitigating damage with quick back step.

And yes, between these moments you engage in the usual combat struggles, with each new section tossing out varying waves of enemies for good measure and variety. In other words, this game is a "never a dull moment" kind of experience, where it lays out its scenes just right. You plow through intense, cinematic gauntlets and awesome boss battles, but not so much that they desensitize. Standard fights crop up just enough to cleans your palate, so to speak, but seldom take up so much time that they become bothersome or tiring. When you've had your fill of kicking cronies into iron maidens, crunching monsters under spiked wheels, or picking and mixing your arsenal to see what kind of combinations you can dream up, the game sends you into another thrill-ride section. 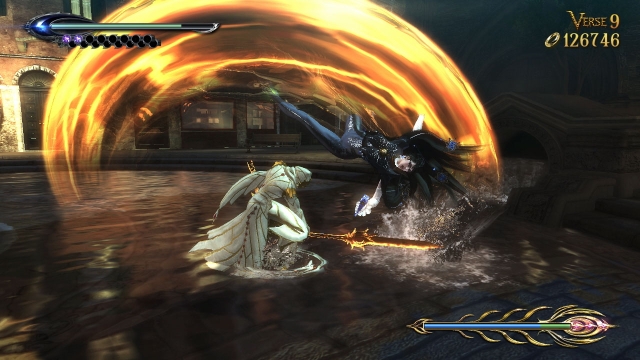 With each victory, crushed piece of scenery, and high rating at the end of an altercation, you earn Sonic the Hedgehog-like rings to spend on fresh strikes, costumes, and additional weaponry. By the end of this affair, you have your pick of numerous arms, including a bow, a whip, a pair of curved blades, and even chainsaws. Even better, you can equip these goods in whatever order you want, placing a sword in one hand, a whip in another, and whatever you want on your feet. Personally, I enjoyed dual-wielding whips while donning chainsaw skates that rend flesh with each kick.

Even though the tone the plot takes isn't incredibly serious, its sober enough to toss a major villain your way that outweighs the previous title's big bad (er, big good?). You blow through a couple of touching beats, mosey onto an explosive final conflict, then watch as the narrative falls back on its old antics at just the right time. The finale draws to a close, you unlock another playable character, and the game invites you to start afresh, its campaign lasting around eight hours.

Bayonetta 2 fits a lot of excitement into a small amount of time, so it isn't as likely to wear you out as your standard big-budget offering. Instead, its breezy length and replay value beckon you back to the battlefields for more madness. Yeah, the game is largely tongue-in-cheek spectacle, but its trio of smooth action, campy nonsense, and variety converge to make it a Sega app for the ages.

If you enjoyed this Bayonetta 2 review, you're encouraged to discuss it with the author and with other members of the site's community. If you don't already have an HonestGamers account, you can sign up for one in a snap. Thank you for reading!

© 1998 - 2022 HonestGamers
None of the material contained within this site may be reproduced in any conceivable fashion without permission from the author(s) of said material. This site is not sponsored or endorsed by Nintendo, Sega, Sony, Microsoft, or any other such party. Bayonetta 2 is a registered trademark of its copyright holder. This site makes no claim to Bayonetta 2, its characters, screenshots, artwork, music, or any intellectual property contained within. Opinions expressed on this site do not necessarily represent the opinion of site staff or sponsors. Staff and freelance reviews are typically written based on time spent with a retail review copy or review key for the game that is provided by its publisher.