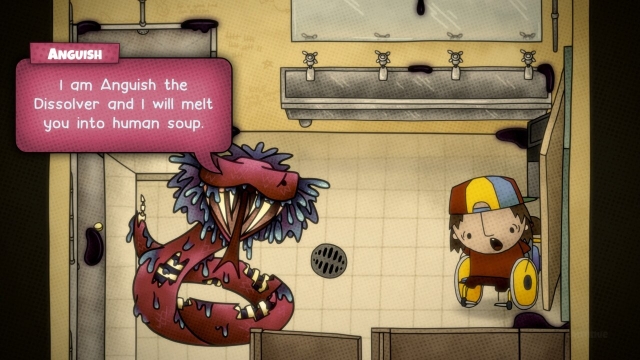 Cardpocalypse plays to the nostalgia of a select group. In the late '90s and early 2000s, some might recall the original height of the "Pokemon craze," and especially the collectible card game that came with it. Personally, I don't identify with this experience because that CCG ascended to popularity while I neared graduation. Nope, I never traded snacks from my lunch for cards or snuck a game in during recess. Thankfully, this deck-building adventure gave me the opportunity to witness that specific part of pop culture, which obviously left an impression on a lot of then-youngsters...

The game introduces you to a fictional TV show entitled "Mega Mutant Power Pets," something of a cross between Pokemon and Teenage Mutant Ninja Turtles. The show's premise involves ordinary pets who mutate into powerful warriors after eating a mutagen. As the series is a huge hit, it spawned a fad CCG that just about every child collects and plays, including you after beginning the campaign.

Right then, the game eases you into its simple rule system. Full disclosure: I've never played the Pokemon card game, so I have no idea how it relates. Every deck requires a "champion" card, basically one of the major characters from the program. Each champion starts with thirty health and a single attack point, as well as a special ability. For instance, some champions bolster other cards or create disposable tokens to pad out your team. Champs, as with any character card, can strike once per turn. When someone's champion falls in battle, that player loses. 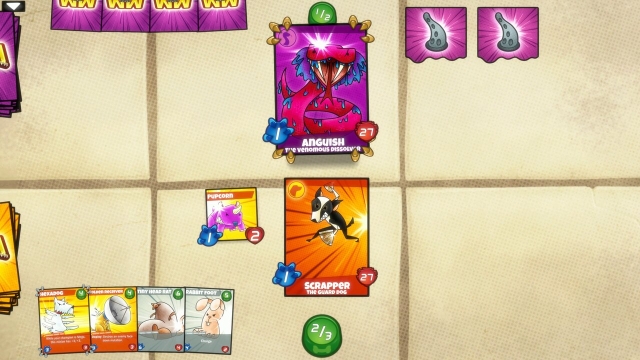 At fifteen hit points, champs "mega mutate." In other words, their talents transform along with them, either improving upon their original ability or offering one that's even more devastating.

Thankfully, champions aren't alone in this battle. "Minions" join them, providing various types of support. For the most part, minions exist to either dish out additional punishment, serve as meat shields, or present challenges for your opponent. For instance, some minions are listed as "defenders," meaning their teammates can't be targeted by blows while they're in play. Others provide bonuses when certain conditions are met. One minion allows you to draw a card any time one of your troops perishes, while another boosts the cost of your foe's creatures. Unfortunately, minions cannot go on the offensive the round they're summoned unless they have an ability called "charge."

Similar to Magic: The Gather, your animals may have other common abilities. For instance, cards with "lethal" automatically kill other minions they damage, while "ambush" allows an attacker to damage a champion without losing any health. As you can imagine, some cards also affect pets with these powers. You'll find various champions that strengthen minions with lethal or charge, allowing you to construct whole decks around these skills.

On top of that, you receive "mutation" cards that perform specific, one-time actions when triggered. For instance, one mutation creates a copy of a minion when you play one that costs three food or less. Another one allows your champion to throw an additional punch when you attack with it. 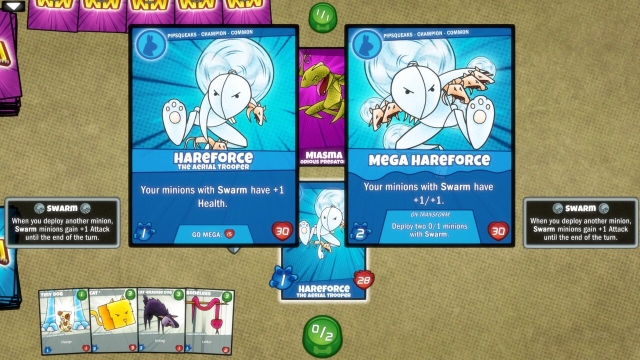 Obviously, you can't just slap a card down whenever you want. Each card costs "food," which is a currency that starts at one and increases by single point and fully replenishes each turn.

Your first handful of matches take it easy on you, offering you some preconstructed collections that easily whoop the competition. However, as the campaign advances, you'll need to step up not only your collecting skills, but your deck-building game. You'll need to trade sweets for useful common cards, swap out weaker components with improved minions or mutations, and learn to utilize "stickers." Basically, you can earn labels you place on your cards to change their strengths, abilities, and costs in a way that benefits you.

Best of all, this title provides boatloads of side quests to perform, many of which reward you with a booster pack's worth of cards. Mainly, you wander around during recess, resolving your classmates' issues. Typically, these exchanges end with you challenging someone to a match, with victory allowing you to complete the mission--all while trying not to get caught by teachers. More often than not, you end up acquiring material that helps hone your decks and increase your chances of victory. That way you can take on the more challenging segments at your leisure, waiting until you've completed a few tasks and earned some nifty pets before tackling more formidable adversaries.

I'm not going to lie: this game is digital crack. It's easy to pick up and learn, and constantly obtaining fresh supplies that allow you tweak your creations only adds to the addiction. I've gotten into situations where I thought I was done with a session and ready for bed, only to discover I'd nabbed a new minion that would go great with a certain champion or mutation, and I couldn't wait to try it out. Hell, I even earned new champions occasionally, which just begged me to pore over my inventory and piece together a new army. 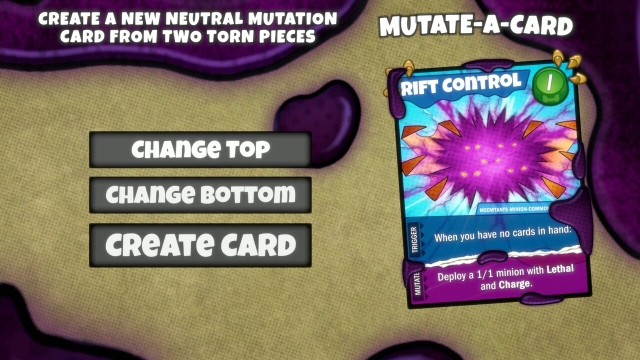 Eventually, the game's rather silly narrative gets extra hairy. Thankfully, it comes a point when the CCG's charm is about to fade because you've played the hell out of it. New opponents emerge with an added twist: if you win, you permanently alter the rules of the game. Some of these changes only cause slight deviations, such as a new rule that bestows an extra attack point to all pets with lethal. Others are more drastic and completely transfigure the game, such as one that creates a community pile of mutation cards that either player can trigger.

By this campaign beat, you're either going to prosper or crumble. For me, changing the rules allowed me to create decks that crushed my enemies in three or four turns, mainly because I selected a rule that allowed me to always draw a certain card at the beginning of a showdown. I would say my case was a combination of luck and getting to know my supply well. Honestly, I can see how the rule changes can really screw over a player, especially if you've designed decks with specific effects.

Because of the rule changes, I breezed through the final parts of the campaign, right as Cardpocalypse began to run out of steam. The whole affair arced just the way it should: beginning with simplicity, slowly building towards difficulty, then turning the whole thing on its head in a way that allowed me to blow through the closing segments while checking out some last-minute concepts that kept the experience fresh.

Cardpocalypse expertly encapsulates the elementary school experience of collecting and trading a CCG with your friends, and the fallout that doing so during school hours creates. This title pretty much allows you to pick up a new card game without having to go to the store to grab boosters and spend additional money. For me, it's an educational experience because I didn't get to take part in Pokemon or Yu-Gi-Oh during their heydays. For folks like me, this is an addictive time capsule that says, "This is what later generations enjoyed. If you weren't a part of this moment in history, that's okay. You can still appreciate it." And I do.

If you enjoyed this Cardpocalypse review, you're encouraged to discuss it with the author and with other members of the site's community. If you don't already have an HonestGamers account, you can sign up for one in a snap. Thank you for reading!

© 1998 - 2022 HonestGamers
None of the material contained within this site may be reproduced in any conceivable fashion without permission from the author(s) of said material. This site is not sponsored or endorsed by Nintendo, Sega, Sony, Microsoft, or any other such party. Cardpocalypse is a registered trademark of its copyright holder. This site makes no claim to Cardpocalypse, its characters, screenshots, artwork, music, or any intellectual property contained within. Opinions expressed on this site do not necessarily represent the opinion of site staff or sponsors. Staff and freelance reviews are typically written based on time spent with a retail review copy or review key for the game that is provided by its publisher.