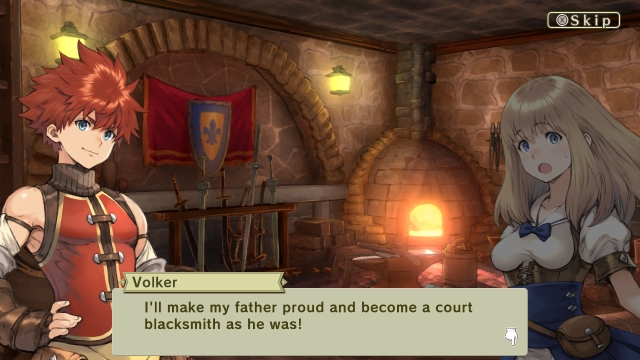 Games like Blacksmith of the Sand Kingdom get a bad rap for their simplicity and repetition. For some folks, titles like this prove mind-numbing and tedious, which is understandable. You commit to a familiar routine, and only minute details change from one section of the campaign to the next. For others, though, offerings of this nature provide a relaxing, zen-like experience that's great for blowing off steam.

Blacksmith's moniker tells you all you need to know about the experience: you craft equipment and sell it in a blacksmith shop. Of course, there's a little more to the affair than merely generating a bunch of swords and suits of armor via menu. You see, you need materials with which to work, and the best way to gather them involves signing up with the local adventurers guild, crawling through dungeons, and harvesting precious ores and organic components. With your trusty pickaxe, you delve into labyrinths filled with mineral nodes, treasure chests, and scores of snarling beasts that drop crafting ingredients for you.

Yes, even the foes you fell provide such goodies. Horses and wolves, for instance, leave behind manes and hide that convert into various types of thread, leather, or clothing. Dragons also give up their claws and scales for improved armor, and spiders and caterpillars give off silk for robes and shoes. 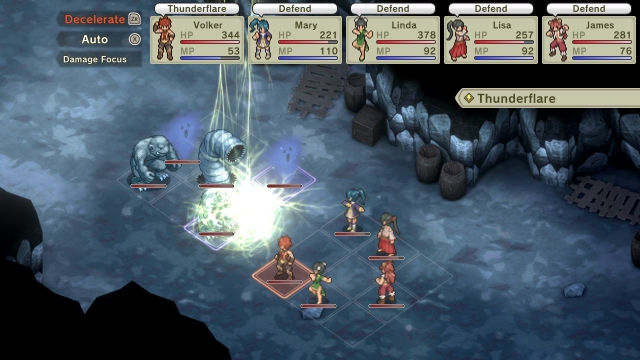 You don't accomplish this feat on your own, thankfully. You hire a party of five customizable explorers, each with their own class and religion that grants various bonuses and sometimes drawbacks. As you advance, you unlock additional classes and religious boosts. Though you start with the usual supply of thieves, fighters, mages, and archers, you eventually end up with knights, samurai, elementalists, and even dancers. On top of that, each character can dual class after a certain point, piling on a laundry list of skills and interchangeable perks to learn.

That's not all. The more materials you round up and use to create goods, the more proficient in smithing you become. Let's say you've contrived a dozen iron daggers and gained 100% proficiency in that item. A nice plus sign appears next to the dagger's name, letting you know that subsequent specimens of that type come with bolstered statistics and added sale value. Plus, you gain the ability to construct the next weapon in that particular family, provided you have the goods to do so. As a result, repetitive crafting comes with enough upsides to make it enjoyable and even a little addictive. Personally, I had sessions where I wouldn't stop until I unlocked "just one more object," knowing I was lying to myself. I'd end up granting access to several fresh pieces of equipment before realizing the sun was coming up... 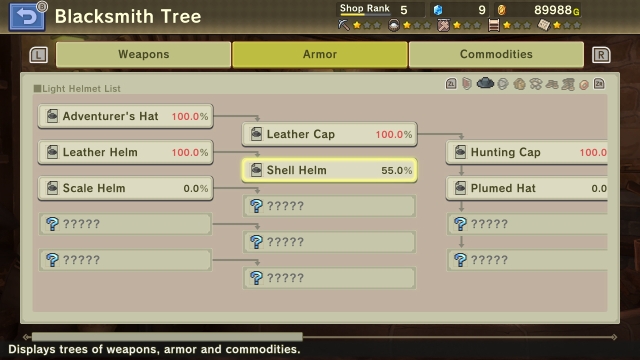 Any one item category provides multiple branching options with a variety of stats that are affected. In other words, one katana might emphasize damage rating, while another focuses more on landing critical blows while also beefing up other attributes or potentially causing a status ailment. Why stop there? While you're at it, you can upgrade your arsenal by slapping on runes that either strengthen various statistics, give you immunity to certain conditions, or stack bonus damage to different types of enemies. With such diversity in regards to armaments, classes, and skills, you can assemble a collection of heroes with a multitude of builds that play to your own preferences.

A familiar rigmarole forms before long. You might start a day in-game and head over to the inn for a bite to eat, which bumps up your party's experience. From there, you mosey to the arena to scotch some monsters and earn points that net you materials of your choosing. Next, you'll likely head over to the adventurers guild and accept a handful of side quests, then jump into a dungeon. You already know what that entails: lots of raking in crafting items and bumping off creatures via straightforward, turn-based battle. With loot in hand, you return home to amass pieces of cutlery or bashery or whatever it is the town's soldiers need, fulfill missions, and display your leftovers for sale while adjusting prices for either profit or customer satisfaction.

And what else do you do at that point except watch your cash supply grow? 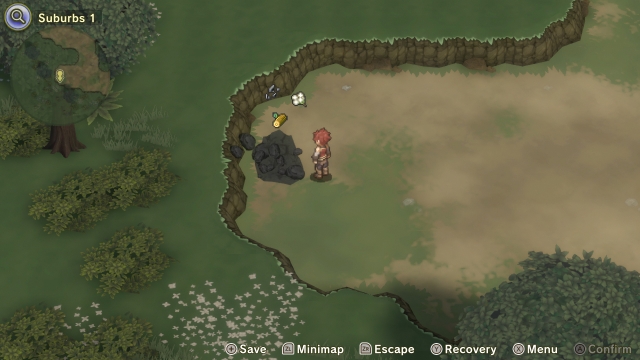 Eventually, you catch Blacksmith's rhythm to the point that you can play it while staring off into space. You amass materials, build anything in which you haven't garnered full proficiency, sell it all off, and start the process anew. Over time, you advance the storyline through highlighted quests, gain access to new dungeons, and find unfamiliar metals to pound into more powerful equipment, all so you can start the process anew...

I'll admit, it gets tiresome after a while. However, by the time Blacksmith's charm begins to fade, its plot decides to wind down. You soon find yourself caught in the age-old "foolish power seeker tries to revive ominous being" trope, only to discover that it results in a pleasant twist. Unless you're dead set on knocking out all of the achievements and taking part in absolutely every diversion, this roleplayer should only take you about twenty hours. Tack on another ten hours or so if you want to actually accomplish everything, including a few post-game super boss encounters and a ridiculous boss rush feature.

Undeniably, Blacksmith of the Sand Kingdom is a simple, unabashed loot-quest adventure crossed with a minimalist store sim. You don't have to worry about finer details like paying taxes or other expenses, or even touching up your premises much to maximize profit. This is a fast-paced dungeon crawler for anyone looking for a title rife with looting, customization, and boatloads of basic crafting, all of which combines to form a relaxing experience. Anyone looking for a deeper or more complex RPG should skip this one.

If you enjoyed this Blacksmith of the Sand Kingdom review, you're encouraged to discuss it with the author and with other members of the site's community. If you don't already have an HonestGamers account, you can sign up for one in a snap. Thank you for reading!

© 1998 - 2022 HonestGamers
None of the material contained within this site may be reproduced in any conceivable fashion without permission from the author(s) of said material. This site is not sponsored or endorsed by Nintendo, Sega, Sony, Microsoft, or any other such party. Blacksmith of the Sand Kingdom is a registered trademark of its copyright holder. This site makes no claim to Blacksmith of the Sand Kingdom, its characters, screenshots, artwork, music, or any intellectual property contained within. Opinions expressed on this site do not necessarily represent the opinion of site staff or sponsors. Staff and freelance reviews are typically written based on time spent with a retail review copy or review key for the game that is provided by its publisher.