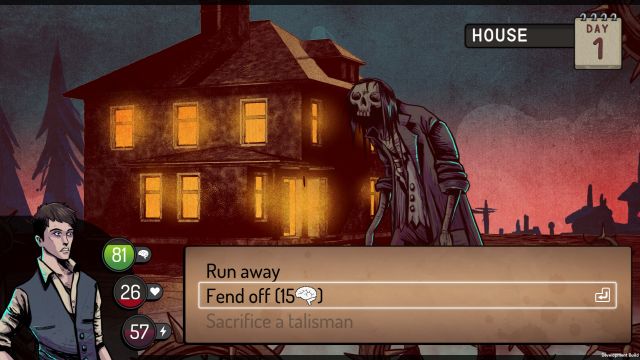 I know it's tacky to start a review with a quote from an iconic figure, but I'm going to do it anyway: "[Horror is] an outlaw genre." It means to hit you with the nastiest content it can muster, leaving you feeling heavy or ruddy. This notion, of course, stands at odds with the typical function of fiction as a form of escapism. Films like "Audition" or "Martyrs," or novels like Jack Ketchum's "Off Season," don't aim to give you a case of the "warm fuzzies." They're darker, downbeat narratives that serve as commentary on society, politics, or ourselves, and in a way they allow their writers and partakers to cope with those everyday horrors.

Thematically, Theatre of Sorrows is no different from the aforementioned entries. This adventure doesn't seek to tickle you with wholesome material or brighten your day. It's the type of game where you're given tasks to complete, each with multiple methods at your disposal. Sadly, none of the pathways you select comes across as morally right or comfortable. For instance, you must literally steal a heart early in the campaign. No, you can't just go to the local butcher and buy a heart for the ritual you're required to perform. Rather, you've got to either knock a nurse at a hospital unconscious or wait until she isn't looking and swipe it off a corpse.

And why must you commit such devilry? Because you have no choice. You see, a demonic cult has taken your sister, and they require your services if you wish to see her alive and well again. They expect you to mosey about their town, contriving talismans from items you find lying about, performing unspeakable acts, then completing each item on your Lovecraftian to-do list with a ritual. Quite often, they ask you to do things no human would want to do, such as defile an idol or mutilate an innocent animal. Each segment leaves the protagonist Killian feeling queasy and uneasy, slipping further into insanity with each action. 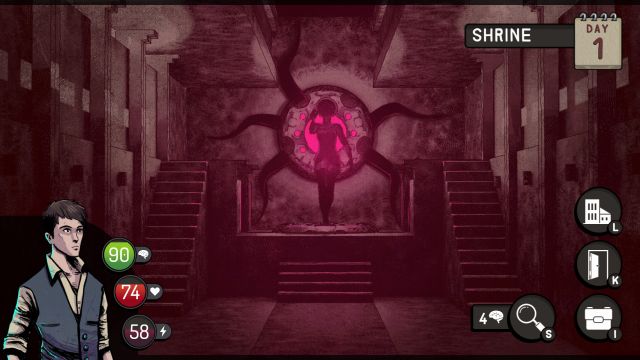 Thankfully, we don't actually see anyone gouging the eyes out of a goddess or eviscerating a bird before uncontrollably dining on its raw organs. Instead, we read about it and let the awful playground of our imaginations cook up even more horrible images than any game scream could hope to. Yes, this title largely features text supplemented by still pictures and menus. You don't actually move a sprite or explore terrain so much as select commands and read passages based on your current location and situation.

You do get free reign around town, though, allowing you to engage in more activities than merely talking to ghosts about gruesome murders or visiting children on their apparent deathbeds. The town map allows you to move a single space from your current location, plunging you into forests, ruined houses, hospitals, churches, cemeteries, and a few other pleasant places. Occasionally, entering premises triggers a randomly generated event that could be either a boon or a curse for you. For instance, watching a group of ritualistic dancers hooks you up with some handy items, but petting a black cat hits you with a temporary status ailment.

There are two reasons you need items during your quest. One revolves around the aforementioned talismans that are not only needed for ceremonies, but also grant you passive bonuses when equipped. The other reason concerns statistic management. As it turns out, everything you do in this game expends sanity, health, and/or stamina. Any time you move from one place to another, you sacrifice some health and stamina. Whenever you search an area for goodies, you lose a bit of your sanity. Thankfully, searching locales allows you to nab crafting goods or consumables that restore your stats. You'll find plenty of the latter items, too, so you would only be in danger of one counter reaching zero if you're grossly unfortunate or ineffective at inventory management or item farming. 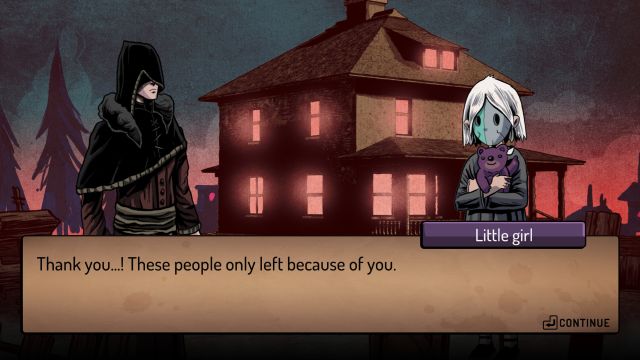 Of course, you also need to take one more factor into account: monsters. Sometimes, you enter a house hoping to find some cloth, candles, or salt for a new talisman. Instead, you end up bumping into a giant bat, a walking corpse, an Eldritch being, or any number of grotesque creatures. You come to this party without any weapons or means of defense, so early on you can only run away or scare a beast off by sacrificing a talisman. As you advance, you find spells that allow you to vanquish particular types of foes at the cost of some of your sanity. You run afoul of beasts more frequently as you progress, so it behooves you to locate and utilize these incantations, especially if you expect to amass enough items to survive or complete missions.

While the previously described content sounds like it could be fertile ground for a deep, character-driven visual novel, the truth is Theatre skimps a bit in regards to narrative depth. To be fair, the game offers deliciously devious lore and some intriguing backstories. However, the tale focuses less on dishing added details to its central characters and more on putting them through awful situations made to distress you.

Perhaps Killian's lack of depth is intentional, though. After all, the game's design gives you options, thereby allowing you to flesh out Killian based on your own perceptions. In a way, you ascribe your own personality onto him, forcing him to act out Theatre's dastardly deeds. In turn, that concept only serves to further eat away at your sense of comfort. You aren't the one enacting monstrous tasks and rituals. Instead, you're forcing someone else to do it for you. 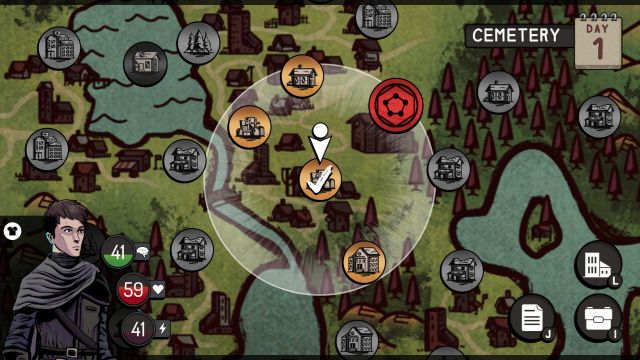 And here's the real kicker: your choices influence your ending. So if you earn the "bad" conclusion, you've got to take the whole affair from the top and put yourself through that heart-rending rigmarole yet again, hoping you get things right this time. Thankfully, you occasionally dig up clues around town that give you pointers for getting things right, so you might be able to escape this ordeal feeling just a tad dirty.

Some could argue that this title is needlessly malicious. Why put players through all of these terrible acts only to make them feel gross? The answer is simple: horror is an outlaw genre, and sometimes it uses its "outlaw" vibe to communicate painful truths about our society. What point could Theatre of Sorrows be making? The best I can come up with this this: regardless of where you align politically, religiously, morally, or anything, you're never going to fully agree with our society. Protest, vote, revolt, or do whatever you must, but ultimately you're expected to participate in this system, often doing things you really don't want to do because you have no comfortable alternatives. Theatre, like any work of terror, is only there to instill a sense of dread because the world we live in is sometimes dreadful. So as a piece of this classification, it does its job effectively.

If you enjoyed this Theatre of Sorrows review, you're encouraged to discuss it with the author and with other members of the site's community. If you don't already have an HonestGamers account, you can sign up for one in a snap. Thank you for reading!

© 1998 - 2022 HonestGamers
None of the material contained within this site may be reproduced in any conceivable fashion without permission from the author(s) of said material. This site is not sponsored or endorsed by Nintendo, Sega, Sony, Microsoft, or any other such party. Theatre of Sorrows is a registered trademark of its copyright holder. This site makes no claim to Theatre of Sorrows, its characters, screenshots, artwork, music, or any intellectual property contained within. Opinions expressed on this site do not necessarily represent the opinion of site staff or sponsors. Staff and freelance reviews are typically written based on time spent with a retail review copy or review key for the game that is provided by its publisher.