There's just too many damn games out there. At least that's my go-to excuse whenever I find myself totally into something that came out an eternity ago and have to figure out just why it took so long for that title or series to catch my eye. And you know what? It's true. Regardless of how much time I allocate for gaming, I'll never get to every single title that might grab my interest. All I can hope for is to eventually get a taste of some of them  even if said "eventually" is years after their release.

I mean, look at me! By now, the Ratchet & Clank series has progressed to the point where its most recent game is a PlayStation 5 exclusive and here I am, all happy and stuff after finishing the PS3's Ratchet & Clank Future: A Crack in Time, feeling like I've found yet another new favorite series to go with the 43 other "favorites" I have. Such is life...

A Crack in Time was released by Insomniac late in 2009, making it about 12.5 years old at the time of this review. While reading that sentence makes me feel a bit sad, playing this game had the exact opposite effect. Possessing a lot of fun action, as well as a story that manages to be both epic and goofy at times, this one proved to be the perfect sort of gaming balm to enjoy when I needed a break from the usual sort of grim-dark stuff that makes up the vast majority of my entertainment.

The Future installments of the Ratchet & Clank series deliver a story spanning roughly 2.5 games. Things started out with Tools of Destruction. While I never played that one due to it being the one game in this mini-series to not be on PlayStation's Now service, a quick online search told me that it involves Ratchet and sidekick Clank foiling an evil emperor and his lackeys before Clank was abducted by mysterious beings known as the Zoni. Quest for Booty was a short downloadable title that didn't do much to advance the overall plot. However, at the end, it's revealed that Clank is now at the mercy of recurring series villain Dr. Nefarious.

A Crack in Time begins with Clank's attempt to escape Nefarious' clutches. In fact, the diminutive robot has multiple stages dedicated to him, as he explores a place known as the Great Clock, solving puzzles and engaging in brief action sequences in an attempt to take over the role of that place's caretaker  the job he discovers that he'd been created to do. While there is a bit of combat in Clank's levels, he neither has Ratchet's stamina nor assortment of weaponry. Instead, his battles feel more like interludes breaking up his main tasks. He'll complete platforming challenges with the help of a staff that can greatly slow time, while also creating duplicates of himself in order to unlock doors requiring multiple buttons to be triggered at once, as well as other tests of his skill. 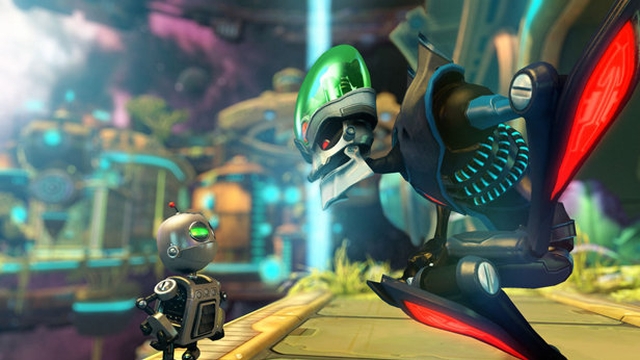 The bulk of the game revolves around Ratchet, as the human-animal hybrid known as a Lombax finds himself traveling through space and exploring a number of planets in his search for his buddy. In a surprise early-game twist, he'll discover that he's not the only Lombax around, as he comes across another on his travels. This guy, Alistar, is very interested in the Great Clock, as he feels that by altering time, he can right a past wrong  inadvertently committed by him  and return the lost Lombax race to its home dimension.

In a neat touch, you actually do travel through space. The game is divided into a number of small solar systems, each containing a planet or two, as well as a number of small asteroids or whatever that can optionally be done in order to gain various prizes. Some of them deliver platforming challenges with the occasional battle to liven things up, while others simply require you to exterminate a bunch of enemies.

This optional stuff does have its merits. If you collect all of the hidden Zoni scattered through the solar systems, you'll be able to access a post-game dungeon for a final confrontation with one of Nefarious' goons. One system houses a battle arena where you can compete in a number of challenges in order to win a couple of those Zoni, as well as weaponry and other goods. Even casually flying around space can lead to you engaging in battles with enemy ships or performing rescue missions on stranded vessels.

When you've had enough of those diversions, there's the matter of the larger planets, as well as a few massive battleships. On each of these locations, Ratchet will have some sort of task to complete  often while facing serious opposition. Fortunately, the Lombax carries a serious arsenal, which gets more and more serious as the game progresses.

While he can always swing his trusty wrench-like melee weapon, he'll also gain a variety of ranged weaponry. Some are pretty standard, such as a pistol, rocket launcher and sniper rifle. Others are a bit strange. One causes enemies to stop what they're doing and start dancing  allowing you to get some free hits in. Another causes a dimensional rift, leading to unsuspecting foes to be assaulted by tentacles from the other side. 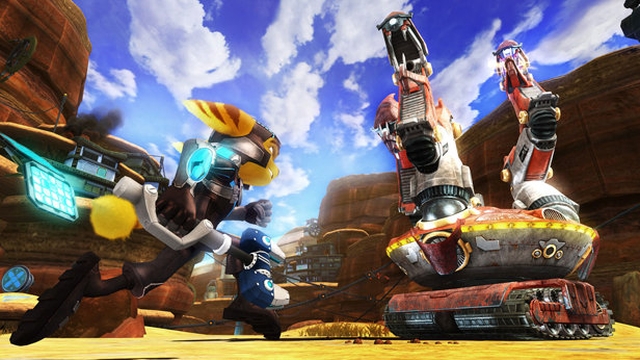 Both Ratchet and his weaponry will gradually power up over the course of the game. By killing stuff and accomplishing quests, Ratchet will gain experience that gradually increases the amount of damage he can absorb. By using a particular weapon in battle, it also will gain experience and can level up a few times to get improvements, such as increased ammo or power. A handful, including your starter pistol, can be customized. Some of the goodies you'll find secreted through levels can be affixed to those weapons to make them more diverse options in combat.

You'll also gain a few other abilities via special items. Hover boots allow you to speed along and ride rails, while a special gun-like item allows you to collect various liquids in order to solve puzzles or get past voracious (and invincible) insects. Both items and weapons will see a lot of usage. Regardless of whether a particular planet uses a futuristic city or a remote mining encampment as its setting, you can count on there being a lot of opposition to blast, as well as items to manipulate and puzzles to solve.

Overall, A Crack in Time is easily a very good action game. But why did I like it so much that I consider it unfortunate it took me so long to play it after its release? Part of it is the story-telling. A person could read a plot synopsis and think this was a very serious game with a truly malicious villain in Nefarious, as well as a complex fallen hero in Alistar. And on one level, it is. On another, it's utterly hilarious. Regardless of how nefarious Nefarious is, he's also so over-the-top and goofy that it's near-impossible to take him seriously for even a single cutscene. One of Ratchet's erstwhile allies is a guy named Captain Qwark, who probably could solve all the game's problems in about five minutes. Well, that is if he were a fraction of the hero he claims to be, as opposed to bumbling comic relief.

But the main reason is simply how this is one of those games that hits my sweet spot. As far as difficulty goes, it was challenging, but not frustrating. While certain battles did get the best of me a couple times, I always was able to learn from my mistakes and eventually get through those troublesome areas. A Crack in Time looks great, with a diverse group of worlds to go through. Those places offer a lot to do and a diligent player might find themselves visiting old worlds later in the game after collecting new powers in order to find additional items. While this game might not be perfect  those tiny asteroid levels do kind of blend together after a bit  it provided me with an experience that I greatly enjoyed.

In fact, it kind of made me want to follow in Alistar's footsteps and turn back time so that I could have experienced A Crack in Time  and the Ratchet & Clank series as a whole  when it all was fresh and new. While the short Quest for Booty wasn't anything special, this one was everything I could have wanted. The sort of thing that has me fired up about playing more of the series. And the sort of thing that makes me wonder what other fun games have fallen through the cracks and evaded my notice. Even if that sort of thinking is steeped in futility. After all, there's just too many damn games out there

If you enjoyed this Ratchet & Clank Future: A Crack in Time review, you're encouraged to discuss it with the author and with other members of the site's community. If you don't already have an HonestGamers account, you can sign up for one in a snap. Thank you for reading!

© 1998 - 2022 HonestGamers
None of the material contained within this site may be reproduced in any conceivable fashion without permission from the author(s) of said material. This site is not sponsored or endorsed by Nintendo, Sega, Sony, Microsoft, or any other such party. Ratchet & Clank Future: A Crack in Time is a registered trademark of its copyright holder. This site makes no claim to Ratchet & Clank Future: A Crack in Time, its characters, screenshots, artwork, music, or any intellectual property contained within. Opinions expressed on this site do not necessarily represent the opinion of site staff or sponsors. Staff and freelance reviews are typically written based on time spent with a retail review copy or review key for the game that is provided by its publisher.