Sonic & Knuckles, which also can be called the second half of Sonic the Hedgehog 3, might not be the best classic Sonic game, but is a definite improvement over its "first half".

On the surface, both games are pretty equally matched. Sonic 3 has six worlds with two levels each. This one has five two-level worlds, two containing one level and a special bonus level to conclude the game, assuming you collected all the hidden gems via successfully completing special stages and becoming Super Sonic. Both start out with a world containing short and comparatively simple levels before immediately ramping things up and making it so it's no longer easy to reach the end of a level and beat its boss before the 10-minute time limit has expired. The additions to the formula introduced in Sonic 3, such as the different forms of shield, also return.

It's also the conclusion of the story started with Sonic 3 involving Sonic's efforts to prevent Dr. Robotnik from acquiring the Chaos Emeralds with the assistance of Knuckles the Echidna, who has been fooled into believing Robotnik is the good guy and Sonic's the actual villain. For the first few worlds, Sonic will regularly trigger traps set by Knuckles, allowing the not-so-good Doctor to remain a step in front of him. Of course, with this being the conclusion, those misunderstandings will eventually be resolved, allowing the two to join forces down the stretch to foil Robotnik.

If you're not using this cartridge's lock-on technology that allows you to play it and Sonic 3 together seamlessly as the programmers had originally intended before realizing their game was too big to fit into one cartridge, you'll immediately notice one alteration to the formula  the ability to also play as Knuckles. Even better, the experience isn't the exact same as with Sonic. Not only do the two character control differently, but there are alterations to certain levels. 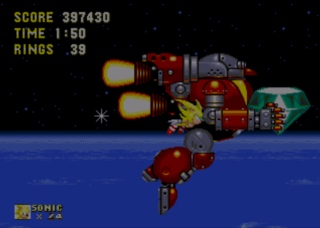 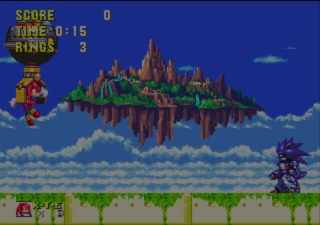 An obvious one is the quick-and-easy location known as Hidden Palace Zone. Sonic will have a brief jaunt culminating with a battle against his misguided counterpart that leads to the two forming an alliance. As Knuckles, you'll just have a short jaunt and you'll be off to the next level without any major fights. In the second level of the Sandopolis Zone, Sonic will accidentally release a number of ghosts from imprisonment and, for the rest of the stage, they'll reward his "kindness" by stalking him as the level gets darker and darkerand then assault him if it reaches maximum darkness before he can find a way to illuminate the place again. Knuckles reaches this place after Sonic, though, which means those ghosts will be slavering over him the instant the stage begins.

That's a cool addition that adds replay value to this game. Another thing making me want to play it over and over again is how I found its levels to be a more fun collection than those in Sonic 3. If you've read my review of that game, you'll know that I found its levels to be a bit on the repetitive side. You'd have a cool challenge in a particular stage and then wind up repeating it multiple times, making it so that the only way you' wouldn't know you were making progress if not for how you were still finding rings to collect and monsters to bop. Even worse, some of those challenges were, to put it lightly, questionable. I complained about that one barrel you had to manipulate in the Carnival Night Zone then and I'm still complaining about it now  the damn thing was THAT annoying with how nothing else in the game was like it and there were no clues as to what you had to do in order to advance past it.

Stuff like that was non-existent in Sonic & Knuckles and, while there might be some in-stage repetition, I never found myself feeling like I was doing the same thing over and over again. Instead, when I think about this game, I find myself thinking about many of its high points. That second level of Sandopolis was pretty thrilling. You're always given enough time to reach each new light switch before the screen gets dark enough for the ghosts to go from background decorations that gradually appear more menacing to actually becoming dangerous, but it does take a certain amount of skill to do so. In short, that makes this level a pretty tense affair, as any mistake or setback has the potential to make your trek a lot more hazardous. 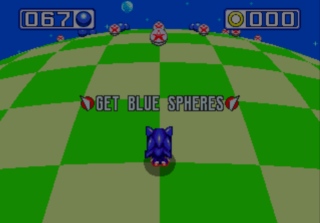 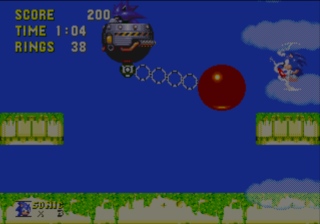 Sky Sanctuary Zone is an exhilarating trek through ruins floating in mid-air that's occasionally punctuated with confrontations with Mecha Sonic  the first two of which emulate Robotnik machines from earlier Sonic games. Death Egg Zone has this one really cool area where Sonic will be floating in zero gravity and have to bounce off objects in order to hit six buttons on a machine in order to open a door. Also: Lots of areas where gravity will be reversed, causing you to have to adjust your play to the change in perspective one gets when running upside-down. Lava Reef Zone can be pretty challengingunless you've collected a fire shield, in which case it'll be easy as long as you can avoid losing it because that particular shield makes you invulnerable to stuff like lava. You know, the main environmental hazard present there.

With only a few exceptions, I really loved this game  almost to the level of Sonic 2. Accessing the secret final level will be a massive pain in the ass, as the special stages holding those necessary gems are mega-annoying ordeals where you have to deal with an over-the-shoulder perspective and clunky controls as you attempt to run over blue orbs and avoid the red ones. And, as mentioned before, there are a few levels where a perfect run is nearly a necessity if you don't want to sacrifice a life due to exceeding the 10-minute time limit. With how some bosses have limited windows of vulnerability, you can wind up dead before you even know it if you enter their arena without much time left on the clock.

Still, Sonic & Knuckles is a very good game with some great levels that were a blast to play through. If you combine it with Sonic 3 via the cartridge's lock-on technology, you might even wind up with an overabundance of riches. By itself, it might not reach that level, but it will be a really fun jaunt through some imaginative worlds that are meant to be played repeatedly due to having multiple characters to choose from. While the Sonic series struggled to maintain its relevancy when 2D platformers started to be phased out in favor of 3D ones, those original Genesis titles definitely show the hedgehog spent a good amount of time near the top of the platfoming mountain.

If you enjoyed this Sonic & Knuckles review, you're encouraged to discuss it with the author and with other members of the site's community. If you don't already have an HonestGamers account, you can sign up for one in a snap. Thank you for reading!

© 1998 - 2022 HonestGamers
None of the material contained within this site may be reproduced in any conceivable fashion without permission from the author(s) of said material. This site is not sponsored or endorsed by Nintendo, Sega, Sony, Microsoft, or any other such party. Sonic & Knuckles is a registered trademark of its copyright holder. This site makes no claim to Sonic & Knuckles, its characters, screenshots, artwork, music, or any intellectual property contained within. Opinions expressed on this site do not necessarily represent the opinion of site staff or sponsors. Staff and freelance reviews are typically written based on time spent with a retail review copy or review key for the game that is provided by its publisher.