If there is one truth in life, it's that love will lead to disappointment. No, I'm not talking about my personal relationships  at least not this time! Instead, I'm talking about the life-long love I've had for Greek mythology. I was but a young lad when I first started reading about the exploits of Hercules, Achilles, Perseus, Theseus and other legendary heroes.

That love never faded as I grew older. When I was in college, I simply moved on from the picture-laden books detailing their quests to the works of Homer and Virgil. And then came the video games in earnest. As a youngster, the main Greek mythos-based game I recall enjoying was the NES' Battle of Olympus  a tough-as-nails side-scrolling adventure very reminiscent of Zelda II: The Adventure of Link. As an adult, though, I was able to find many more hitting the market, with the many God of War games at the forefront.

Even if I believe they've been overrated, I still have enjoyed the games in that series. Others, such as mediocre Diablo clone Titan Quest, weren't so impressive, but at least scratched an itch. But then I played Rise of the Argonauts and feel as though my love was ripped out of me, set on fire and had acid poured upon the ashes. If I were willing to dig deeply enough, I think I could find the framework of a decent game buried deep within this 2008 PlayStation 3 offering. Alas, I'm not in a charitable mood. Moral of the story: Don't screw up the beloved stories of my youth.

To give credit where credit is due, Liquid Entertainment was at least able to deliver a reasonably solid foundation. King Jason is hanging out on his home island with his soon-to-be-queen when the lovely lass is quickly dispatched by an assassin. After some hot tutorial action, the grieving royal announces that, in lieu of giving her last rites, he's going to hunt down the mythical Golden Fleece in order to bring her back to life! Leaving his uncle Pelias in charge of the kingdom, the obviously sane and well-balanced Jason sets out with best bro Hercules on a very impressive ship designed by master shipwright Argos. 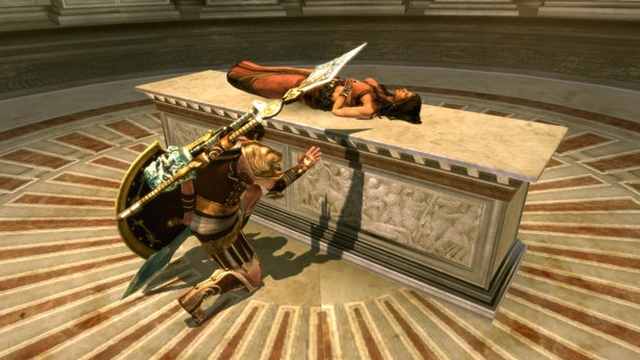 Their first destination: The island of Delphi, where Jason adds the satyr Pan to his crew and gets a bit of cryptic advice from the local Oracle, telling him that he must visit three separate islands to collect descendants of the gods Athena, Ares and Hermes in order to help find the way to the Fleece. Meanwhile, via cutscenes, we find out what anyone familiar with the Jason and the Argonauts story is well aware of  that Pelias is a real bastard. In this telling of the tale, he is the power-hungry head of the assassins and their cult dedicated to an evil Titan who has all sorts of diabolical plans. In other words, if Jason is able to accomplish his quest, he's not going to receive a warm homecoming.

While that premise has a fair amount of potential, there is nothing in Rise of the Argonauts that comes close to fulfilling it. This is a pretty short game that will likely take 10-15 hours to complete and the designers seemingly weren't sure if they wanted to use that time to craft a swords-and-sandals fantasy or a more dialogue-heavy tale where your decisions have consequences. As a result, both facets got half-assed, creating something that would struggle to satisfy anyone.

The first issue comes from the game's camera. One thing I love about modern gaming is how they've gotten more and more stable. While you'll want to manipulate them in order to look around, they don't get hung up on scenery and tend to work wonderfully while you're moving around and exploring. Rise of the Argonauts didn't get that memo. I'm not even talking about combat. I was constantly adjusting the damn thing while walking. You can be going in a straight line and if there's an incline or decline along that route, you'll have to fiddle with the camera to get it centered again. Annoying.

Exploration is fruitless in this game. Like many games, there will be barrels and other items scattered throughout its regions; however, unless you're specifically meant to interact with something, you can't, so there's no breaking of stuff in order to find items. Since most objectives you have are listed on your map, you'll find yourself simply running from one place to another while ignoring the scenery.

Combat is one-dimensional. You'll get a handful of weapons and be able to access a few skills, enemies will appear and you'll charge them to swing your sword, mace or spear while occasionally bashing them with your shield. It's very simplistic and, since this game isn't difficult on the default setting, it leads to mindless brawling where you'll charge foes and swing your weapon until they're dead while facing little risk. This might take a while, though, as a lot of foes have armor and shields, so your first few swings will be whittling that stuff away so you can actually damage them. Normally, I'd complain about the infrequent nature of these fights, but considering how they play out, I kind of feel grateful that combat isn't the only focus of this game. 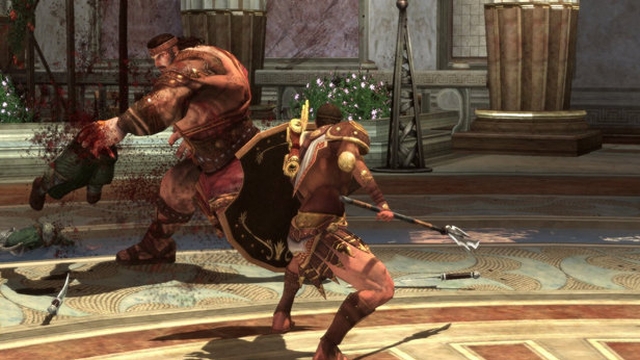 Then again, the conversation stuff isn't exactly gripping either. Early in the game, Jason gets the support of four gods and all of your chats with other characters will give you options between four dialogue choices, each pertaining to the creed of a particular god. Ares favors forceful statements, while Apollo's are more compassionate, Athena focuses on justice and Hermes is a bit snarky. Regularly pick a particular deity's dialogue choice, as well as dedicate various combat and plot-related feats to them, and you'll be able to unlock passive and action skills in their trees.

Unfortunately, this is a feature that has little to do with anything related to the game's story and everything to do with how you want to build Jason. For example, fall in love with the slow, but powerful, mace and you'll want to focus on Ares, as he offers passive skills that boost its damage and ability to break armor more quickly. Apollo is useful due to having a healing spell, assuming you have any idea when to use it, since the closest thing to a life meter you'll see is how the screen gets distorted and the music changes whenever Jason is near death.

While that happened a few times during my quest, the only time I died in this game was against the final boss. Not because Pelias was difficult, but because he was sort of a puzzle boss where the first two stages of his three-part fight required you to use techniques that might have been detailed during the early-game tutorial, but hadn't been necessary at any point until this confrontation. It's always fun to have to put a game on pause during a battle to brush up on topics like, "How the hell do I throw my spear?".

When I started Rise of the Argonauts, I was hopeful because it was based on a classic legend and I was intrigued to see how that translated to a video game. By the time I was finished, I was wishing that Liquid Entertainment had simply done a note-for-note gaming remake of 1963's Jason and the Argonauts movie. Battles against the gigantic Talos, the Hydra or even those seemingly indestructible skeletons at the end would have been more epic and enjoyable than such things as wandering around a city to find people to talk to in order to advance the plot, regular fights with the same generic soldiers and satyrs or the penultimate boss being confronted and dispatched via a combination of dialogue and cutscenes.

But that's disappointment for you. Fall in love with ancient stories, get excited about how they'll translate to one form of entertainment or another and then face the sad reality. Rise of the Argonauts would be hard-pressed to warrant much praise under any circumstance, but being a poorly-rendered portrayal of a tale I remember fondly, I can't find it in me to bestow any.

If you enjoyed this Rise of the Argonauts review, you're encouraged to discuss it with the author and with other members of the site's community. If you don't already have an HonestGamers account, you can sign up for one in a snap. Thank you for reading!

© 1998 - 2022 HonestGamers
None of the material contained within this site may be reproduced in any conceivable fashion without permission from the author(s) of said material. This site is not sponsored or endorsed by Nintendo, Sega, Sony, Microsoft, or any other such party. Rise of the Argonauts is a registered trademark of its copyright holder. This site makes no claim to Rise of the Argonauts, its characters, screenshots, artwork, music, or any intellectual property contained within. Opinions expressed on this site do not necessarily represent the opinion of site staff or sponsors. Staff and freelance reviews are typically written based on time spent with a retail review copy or review key for the game that is provided by its publisher.