The tale of Sonic the Hedgehog 3 is one of technological limitations and a creative way to work around them that took eight months to be realized. It's also a tale of an incomplete game that wasn't truly finished until those months had passed.

After Sonic the Hedgehog 2 proved to be bigger and better than the original, Sega had the lofty goal of making the series' third game truly massive. While an ambitious concept, there was one big roadblock in their attempt to turn it into reality. Only so much data could be inserted into a cartridge, so it became a sure thing that a lot of material would be left on the cutting room floor.

And so, when Sonic 3 was released in February 1994, it wasn't all that it was expected to be, only featuring six worlds containing two large stages each. Later that year, Sonic & Knuckles hit the market, boasting all the remaining content, as well as the ability to also control erstwhile antagonist Knuckles.

Now we come to that creative workaround. Sonic & Knuckles was released on a cartridge possessing something called "lock-on technology", by which a person owning both it and Sonic 3 could attach the two cartridges together and get both games at once  just as things were originally intended. A massive platformer containing 14 worlds, the ability to control Sonic, Tails and Knuckles and different ways to play various levels depending on which character was being used. 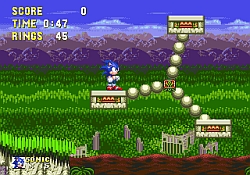 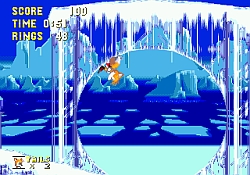 When it comes to cool history nuggets in the world of video gaming, that has to rank near the top. A game so large it required the use of two cartridges AND a way to connect the two in order to create a seamless experience? That's some neat stuff! However, this review isn't for that ultimate finished product  just the vanilla Sonic 3. As one might expect, Sonic, with the assistance of Tails, is out to prevent the villainous Dr. Robotnik from succeeding in another of his evil plans. This time, the not-so-good Doctor has enlisted the aid of another character, Knuckles, by convincing him that Sonic is the true villain.

If you've played previous games in the series, you'll know what to expect: A variety of platforming challenges, with some utilizing the hedgehog's elite-level speed and others requiring a more methodical approach. You'll collect rings throughout each level and be able to absorb damage at the cost of those items as long as you're holding at least one. Occasionally, you'll get access to a bonus game where you'll attempt to obtain one of several Chaos Emeralds with the goal of hunting all of them down in order to get a slightly better ending.

All in all, Sonic 3 is a good game, but one that definitely feels incomplete. There are fewer worlds than Sonic 2 and fewer levels than either of the previous two games in the series, but, hey, those levels are all really massive compared to what a gamer would have experienced beforehand! You have the same 10-minute limit to get from beginning to end, but for the first time, you'll be at legitimate risk of running out of time for reasons not pertaining to wanting to explore every nook and cranny to find every single ring, power-up or bonus life. I can attest to this  I did lose a couple lives in this manner and also finished a number of levels with under a minute remaining on the clock.

Of course, this begs the question of whether Sonic 3's levels have enough content to justify taking longer to run through and that's where the game falters a bit. As you play, you'll notice various challenge and set-pieces being used repeatedly. At times, the only reason I was sure I hadn't taken a wrong turn and found myself retracing old steps was because I was still finding plenty of rings to collect. A couple of the game's challenges also fell a bit short. In the Carnival Night Zone, one obstacle is a barrel blocking your way that you need to jump on and manipulate the controls just right in order to move itor be stuck there as precious time ticks away. Another stage is fond of descents that will prove to be endless unless you jump to a ledge at the proper time. 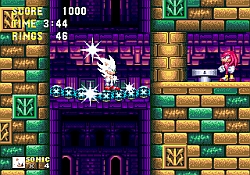 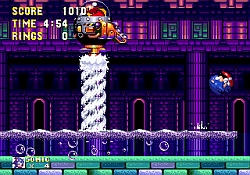 While I wouldn't put this game on the same level as Sonic 2, it's still a Genesis Sonic game, which means it's a lot of fun. One neat addition to the formula is how the game's levels and worlds are connected. Either the end of one smoothly transitions to the next or there will be a brief scene in which Knuckles sets off a trap that sends Sonic and sidekick Tails to their new location. This game also has its share of cool moments. The comparatively short Angel Island Zone starts out as a lush forest until a machine suddenly sets the place on fire. From that point, you'll see all the vegetation on the island burning, as the world suddenly transforms from the typical light-hearted beginning to a platformer into something far more fearsome. Later, in the Ice Cap Zone, you'll start play by engaging in some exhilarating high-speed skiing down a mountain.

And there are some neat additions to the formula. While you still fight Dr. Robotnik in one of his machines to conclude each world, there also are bosses at the end of each place's first level. A few new shields make their debut in this game  each with powers beyond simply protecting your hedgehog from damage. The Lightning Shield can give you a double jump, for example; while the Water Shield's secondary function of allowing you to breathe underwater can be quite handy at times  and something I think we all probably wish existed in the first game and its Labyrinth Zone.

Technological limitations prevented Sonic 3 from being the same step forward over Sonic 2 that 2 was over the original, although that issue was solved with the release of Sonic & Knuckles  at least if you owned both cartridges and could attach them together. By itself, while this game isn't quite at the same level as 2, it's still a fun game that's worth playing. There was something about this era of platforming games that I still find intoxicating and even a less-than-great installment in one of the genre's flagship series can offer lots of fun, especially in comparison to so many of those lesser lights attempting to leech off the success that mascots like Sonic and Mario were able to achieve.

If you enjoyed this Sonic the Hedgehog 3 review, you're encouraged to discuss it with the author and with other members of the site's community. If you don't already have an HonestGamers account, you can sign up for one in a snap. Thank you for reading!

© 1998 - 2022 HonestGamers
None of the material contained within this site may be reproduced in any conceivable fashion without permission from the author(s) of said material. This site is not sponsored or endorsed by Nintendo, Sega, Sony, Microsoft, or any other such party. Sonic the Hedgehog 3 is a registered trademark of its copyright holder. This site makes no claim to Sonic the Hedgehog 3, its characters, screenshots, artwork, music, or any intellectual property contained within. Opinions expressed on this site do not necessarily represent the opinion of site staff or sponsors. Staff and freelance reviews are typically written based on time spent with a retail review copy or review key for the game that is provided by its publisher.