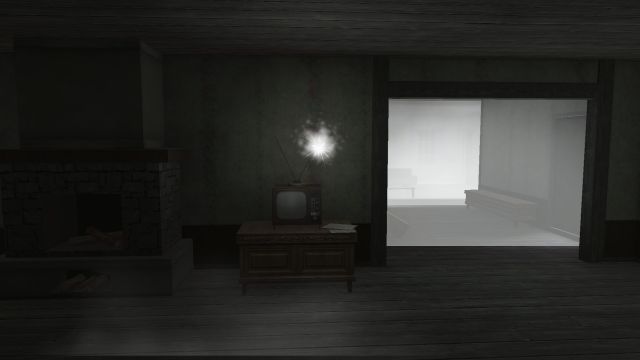 Post-Fading Visage thought number one: "I haven't played many games like this before."

Post-Fading Visage thought number two: "There's a good reason no one else has produced one like this..."

Fading treads territory that few games have explored yet. I applaud this product for getting away from standard first-person horror material, evading your standard haunting living space, rundown facility, or zombie apocalypse junk. Hell, the campaign doesn't begin in a car, nor does it end with you waking up from a coma or finding yourself in an asylum. I can't tell you how many titles I've come across that fall into either of those categories...

Instead, you commence this affair in a wrecked house that's only debatably haunted. A shiny thing floats toward you, apparently either a spirit or a fairy. Basically, imagine if a star had an anus; that's what it resembles. The glimmer-hole first tells you to follow it, then exits out the front door. You clop after it and it takes you to a note outside the house, positioned on a rock. You listen to the being speak for a moment about a picnic, all before a message pops up warning you to hide in your home. Not even a second passes and you collapse, and the title screen greets you. Obviously you failed whatever task the game handed you, all before you could even process that you had one to undertake...

After the confusion and frustration abate, it's time to make a decision: stay the course and see if you can make it through this muddling mess or--and this is the rational pick--give up and check out something else in your over-sized Steam library. Here's the thing: that first "challenge" doesn't give you much warning or room for error. You're supposed to grab the note and begin running back to the house before the message has a chance to crop up, all the while listening to the ghost yammer on about a picnic. If you make it through the front door in time, you'll collapse and think you failed. You might even throw your hands up in exasperation as I did, until you notice that the game is saving your file. 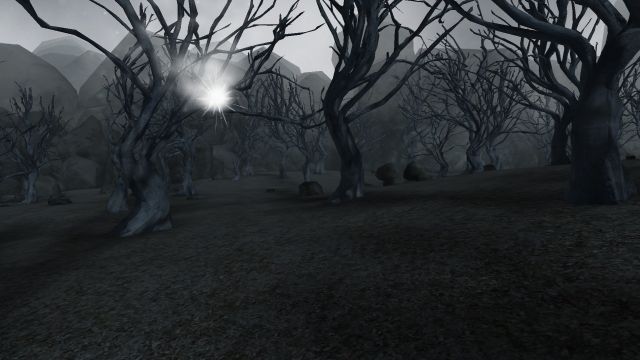 You awaken once again and the "star's butthole" returns to beckon you to another place. You follow it to a backpack in the middle of a misty forest filled with dead trees and depression. The specter continues the anecdote that began when you found the note, and you once again have a limited amount of time to get back indoors before absolutely nothing kills you for no apparent reason.

After you come to, it's the same story again: find an item, listen to the spectral colon blather on, run back to the ol' homestead.

I noticed the time limit wasn't always consistent when I played. During one stage, I grabbed the item the sprite showed me and immediately took off for the goal, which was nearby. I failed and died, perishing mere feet away from the door. During my next attempt, I took perhaps twice the amount of time to get back to my abode and made it. I'm not even going to question the logic, because I succeeded and that's all that matters. 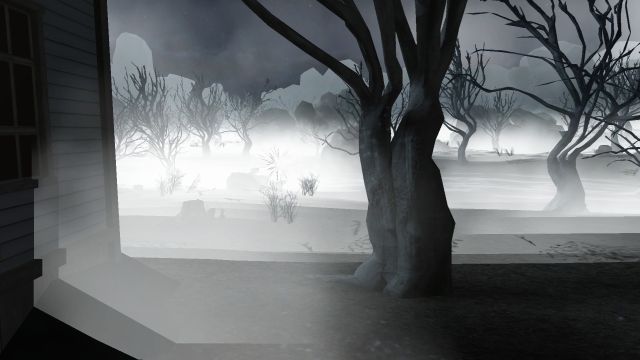 So yeah, that's the whole experience. You follow a floating light to an item positioned outside your home, pick it up, run back to the building, collapse, and begin the process anew. If you're lucky, you might catch clips of the most unimpressive horror story imaginable. To call this game merely "dull" would be an understatement. The only point of interest it even attempts to offer is a running storyline related to you by a voice actor with such a pronounced echo to her voice that you can barely make out what she's saying. Nor can you really follow along with the subtitles, since they disappear quickly. Hell, I personally had a difficult time keeping up with the simple tale because I mostly focused on trying to find my way back to the house in time, which caused me to block out the already difficult to understand narration.

The good news is this game only lasts ten minutes. You eventually reach one final item, you get a choice between two options, and then you watch an anticlimactic ending play out where just about nothing happens. Even for a ten minute, rudimentary horror title, the conclusion feels inadequate and unsatisfying. No, this game couldn't even give you the satisfaction finally crossing it off your backlog because it hits you with a closing segment so unremarkable that you come away feeling even more empty and cheated.

Fading presents more evidence to the notion that originality isn't inherently a positive quality. When a content creator of any kind seeks to innovate, they still need to question if their fresh concept provides enough substance to be worthwhile. I don't exactly relish the idea of performing mundane actions to advance a ho-hum story, yet that's exactly the kind of unique content this title offers. There aren't many games like it, but there's a solid reason why...

If you enjoyed this Fading Visage review, you're encouraged to discuss it with the author and with other members of the site's community. If you don't already have an HonestGamers account, you can sign up for one in a snap. Thank you for reading!

© 1998-2022 HonestGamers
None of the material contained within this site may be reproduced in any conceivable fashion without permission from the author(s) of said material. This site is not sponsored or endorsed by Nintendo, Sega, Sony, Microsoft, or any other such party. Fading Visage is a registered trademark of its copyright holder. This site makes no claim to Fading Visage, its characters, screenshots, artwork, music, or any intellectual property contained within. Opinions expressed on this site do not necessarily represent the opinion of site staff or sponsors. Staff and freelance reviews are typically written based on time spent with a retail review copy or review key for the game that is provided by its publisher.