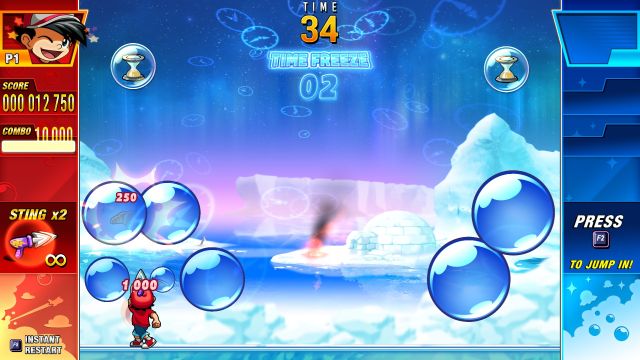 Some arcade games from way back were neat, yet intimidating. Unless you were a master player--something I was not in my preteen years--you didn't mess with these cabinets for fear they would devour your piddling store of quarters in no time. Instead, you waited until the real pros showed up. You'd watch them, hoping they weren't the kind of jerk who told you to piss off because you were wrecking their concentration. It was the only way you got to see vast portions of campaigns without spending your entire miserable allowance. You glimpsed so many different, mind-blowing scenarios and gorgeous backgrounds and awesome power-ups without blowing your change on "gitting gud," and it was wonderful.

Thankfully, technological advancements (and maybe years of experience) have weakened the boogeymen of yore. Games I wouldn't even consider playing because they were too tough to justify a token or two have seen revamps, remakes, ports, spiritual successors, and/or re-releases across numerous platforms over the last few years. I no longer have to drive all over the Pacific Northwest to locate working coin-ops of face-breakers like Haunted Castle or Buster Bros. (aka Pang) while worrying that I'll end up dumping more than loose couch change on playing them. Best of all, some of these iterations incorporate more modern, user-friendly standards like infinite lives, save states, or rebalanced mechanics while still offering some form of challenge.

The latter of the two aforementioned titles returns with a newish installment that feels like a slight revisit: Pang Adventures. This title serves as both an introduction to Capcom's old franchise and a love letter for folks who played it arcades back in the day. For people like me, though, it's an opportunity to finally dive headlong into the puzzle-shooter madness that seemed unapproachable decades ago. This is your standard Buster Bros. offering, except with multiple modes and a bit more forgiveness. 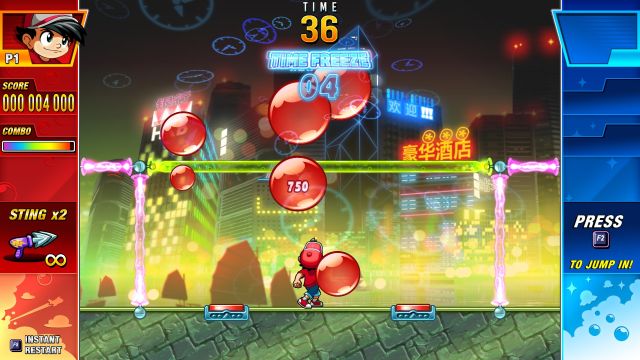 For those unfamiliar with the series, you play as one of two gun-toting characters who aim to thwart bouncing, killer balloons sent to Earth during an alien invasion. You accomplish this by firing a harpoon-like weapon upward, complete with a sharp tip and a line that trails after it. If either part of the harpoon or its cord touch a ball, it pops and splits into two smaller orbs. You continue this process until your targets divide into the smallest possible size, at which point they burst for good. When all of the murderous inflatables have been vanquished, you move to the next stage and begin anew.

Obviously, it's not as easy as it sounds. Your foes bounce or float all about the stage in different patterns and speed up as they form smaller versions of themselves. Various obstructions often prevent you from making clean shots, including destructible bricks and force fields. Some of these bits of environment also serve to confine you at times by granting less wiggle room with which to work. During such stages, you find it difficult to tread without bumping into a balloon and losing a life. It also doesn't help that you can't move while firing, as you come to a complete stop any time you discharge your arm. That's when you really need to watch your surroundings, because you're a sitting duck any time you take an offensive stance.

Your only hope lies in nabbing a power-up that either upgrades your weapon or offers temporary protection. For instance, you can trade the harpoon for a chaingun with limited bullets or a revolver that infinitely reloads each time you pop off six shots. My own person favorite is a space laser that doesn't last very long, but fires a ray that cuts through whole swarms of spheres. Plus, there are a few defensive goodies you can snag, including a shield and a time stopper that also renders you temporarily invincible while your opponents hold still. 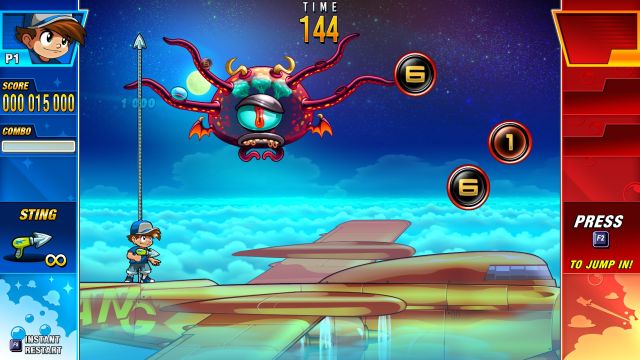 Pang is one of those basic games that's easy to grasp, but fairly addictive to play. Popping balloons has always felt satisfying, but adding a puzzle-action spin to it only makes it even more pleasing. You spend each stage figuring out the best ways to survive, examining set pieces and forming strategies while considering where you need to position yourself while firing. Hell, in some cases your victory hinges on blasting breakable bricks to uncover weapon upgrades that give you an edge against the balloon invasion. If you fail to secure those timely enough, you might be in for a desperate battle. All the same, there's something about watching well-laid plans come together while balloons burst that melts away daily stress.

The balls themselves also come in a fair number of varieties, from standard red ones that bounce along the floor to electric ones that send down bolts of lightning when damaged. Others also obstruct your view by creating smoke or pouring lava on the ground that eliminates anyone who touches it. Of course, these bubbles sometimes prove advantageous to you, especially if you end up dumping a ton of molten rock on a whole flock of balloons and watching them vanish in a puff of steam.

Of course, the only real gripe I have with this title is that you often feel like a victim of bad luck when you perish. Sometimes you fall due to poor reaction on your part, but other times you find yourself in an inescapable situation that you couldn't possibly have predicted, and you can't help but feel a tad cheated as a result. 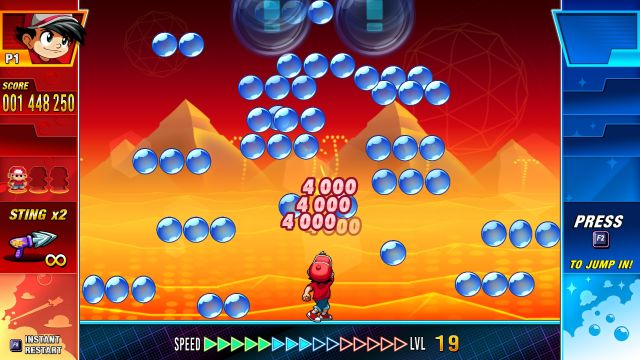 Old school Buster Bros. always kicked my ass because enemies moved more quickly than I could handle and quarters only provided so many lives. Adventures, however, offers an experience comparable to its older siblings, but with the addition of a "tour mode" that provides the contemporary standard of unlimited lives. Thus, the experience proves more inviting than its arcade outings while maintaining a similar difficulty rating. Because I could keep playing without having to pay each time I bit the dust, I found myself glued to this title, sometimes unable to admit that I needed to call it a night and go to bed. Yeah, I still swore a few times, but I never really felt fully frustrated by this product. Instead, it presented just the right balance of breeziness, catharsis, and challenge that I seldom walked away from a session feeling agitated.

After completing the campaign, you can check out a couple of other modes. One offers a traditional score-attack version of the experience where you start with three lives and earn extra ones every 500,000 points. Unfortunately, if you run out of lives, you have to take the whole campaign from the top. The package also includes a survival mode where you stand in an empty room and blast balls as they appear, trying to last as long as possible. Both of these modes of play basically are fine additions, though they're ultimately nothing monumental.

Pang Adventures in some ways feels like a little slice of revenge. I spent years avoiding these titles because they kicked sand in my face, until I came across one that wasn't designed to blatantly shake down its audience. You pay a one-time fee for digital access and you never drop another cent into it, then you get unlimited chances in campaign mode to beat the ever-loving snot out of cartoon orbs. I don't see many negatives here...

If you enjoyed this Pang Adventures review, you're encouraged to discuss it with the author and with other members of the site's community. If you don't already have an HonestGamers account, you can sign up for one in a snap. Thank you for reading!

© 1998 - 2022 HonestGamers
None of the material contained within this site may be reproduced in any conceivable fashion without permission from the author(s) of said material. This site is not sponsored or endorsed by Nintendo, Sega, Sony, Microsoft, or any other such party. Pang Adventures is a registered trademark of its copyright holder. This site makes no claim to Pang Adventures, its characters, screenshots, artwork, music, or any intellectual property contained within. Opinions expressed on this site do not necessarily represent the opinion of site staff or sponsors. Staff and freelance reviews are typically written based on time spent with a retail review copy or review key for the game that is provided by its publisher.