Despite showing a lot of promise, PixelJunk Racers: 2nd Lap is one of the least satisfying racers I've ever played. It doesn't falter for the usual reasons. The controls are actually super responsive, which is something all too many smaller developers don't seem to feel is important in racing games. It's nice that the generally reliable folks at Q-Games did well in that regard, but they stumbled when they forgot to put together an experience that's actually any fun to play.

We all define "fun" differently, of course, so let's look a bit more closely at how the game functions and why the experience provided doesn't fit my definition. 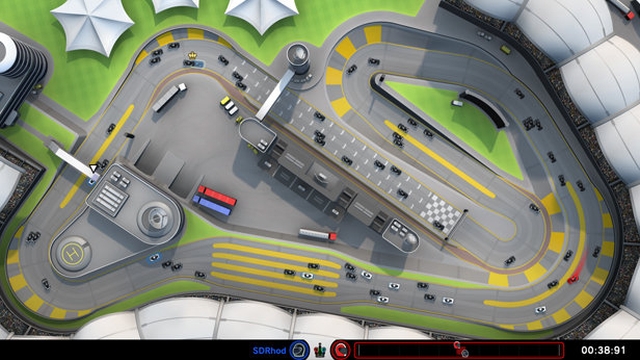 The overall setup is that you're driving slot cars around single-screen tracks. Before you are even permitted to reach the title screen, you have to prove you're capable of squeezing the R2 or L2 shoulder buttons with appropriate precision, in order to stay within a range shown on the odometer. Once you demonstrate the requisite skill, you're allowed to advance to the title screen. Such a test might seem like a cruel trick, but it's for your own good; if you're not adept at manipulating the throttle, you are in for absolute misery once you begin playing.

From the main menu, after logging into the PlayStation Network, you can choose to check out high scores or attack player ghost performances, and there are Quick Race and Party Races options also. Those two modes are intended for play with up to 7 players, and I suspect that experience could be fun with the right sort of pals along for the ride. Living through a pandemic, however, anti-social me came up short. My wife is simply not the sort of person who gets excited about trying her hand at games that demand precision. That left me to devote my time to the package's primary mode: Solo Tournament.

In Solo Tournament, you advance through a tournament circuit by placing third or better in a series of four events, and then (usually) by clearing a more challenging competition to access the next tournament. The rules for individual events change, depending on the tournament, so you're not just doing the same thing all the time as you finish 32 events spread across the 7 available tournaments. 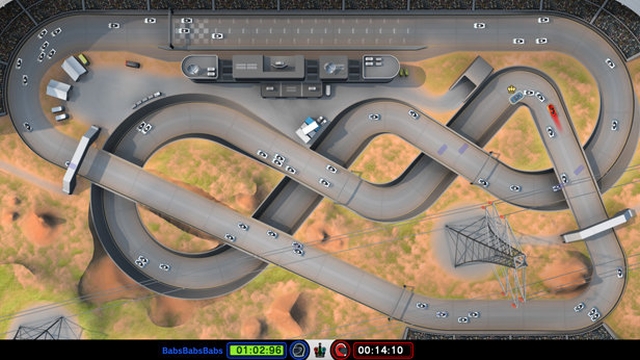 So anyway, proper clutch control is vital. The problem is that the lanes are usually packed to the gills, especially by the time you access some of the later tournaments. They are so crowded that you're required to frequently switch lanes and zip through very brief openings, lest you ram against the back of a vehicle (or even worse, get stuck in a group of slow-moving drivers). Meanwhile, the AI-controlled vehicles cruise at supersonic speeds, weaving all over the place and easily darting through each opening (often knocking you out of line with the very gap you were aiming for, which pushes you into the back of another car). 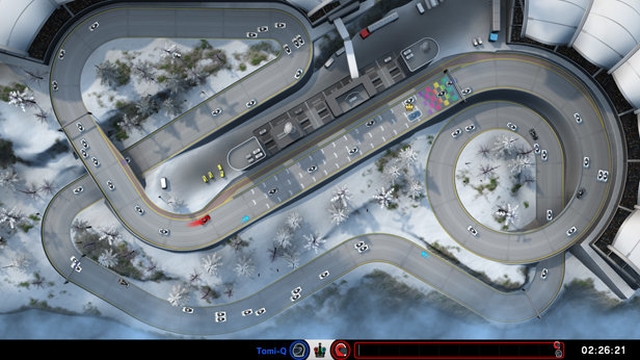 Races tend to be enormously frustrating, because it feels like you're the only human invited to participate in a tournament of gods. I don't mind going up against skilled human players and losing because I know they dealt with the same limitations I did. The AI in PixelJunk Racers: 2nd Lap is fiendishly competent in ways I simply can't replicate. That gets super annoying and the chipper announcer telling me to try again only makes it worse. That's true especially because you can't just "retry." Instead, you must go through a delay each time while you select and load up the event again. Every failure winds up eating more time than feels ideal, just so you can make your next attempt.

Aside from being a chore to play, PixelJunk Racers: 2nd Lap is a neat little piece of budget software. Its soundtrack is catchy and the limited voice work is enthusiastic. Track designs are presented attractively, and it's reasonably easy to follow the on-screen action as long as the looping track designs don't mess with your sense of orientation. I wanted to like this game so much, but unfortunately, the punishing design sucked the fun out of the whole experience. I finally reached the point where I was just plain done with all of it. I definitely expected better...

If you enjoyed this PixelJunk Racers: 2nd Lap review, you're encouraged to discuss it with the author and with other members of the site's community. If you don't already have an HonestGamers account, you can sign up for one in a snap. Thank you for reading!

© 1998-2021 HonestGamers
None of the material contained within this site may be reproduced in any conceivable fashion without permission from the author(s) of said material. This site is not sponsored or endorsed by Nintendo, Sega, Sony, Microsoft, or any other such party. PixelJunk Racers: 2nd Lap is a registered trademark of its copyright holder. This site makes no claim to PixelJunk Racers: 2nd Lap, its characters, screenshots, artwork, music, or any intellectual property contained within. Opinions expressed on this site do not necessarily represent the opinion of site staff or sponsors. Staff and freelance reviews are typically written based on time spent with a retail review copy or review key for the game that is provided by its publisher.