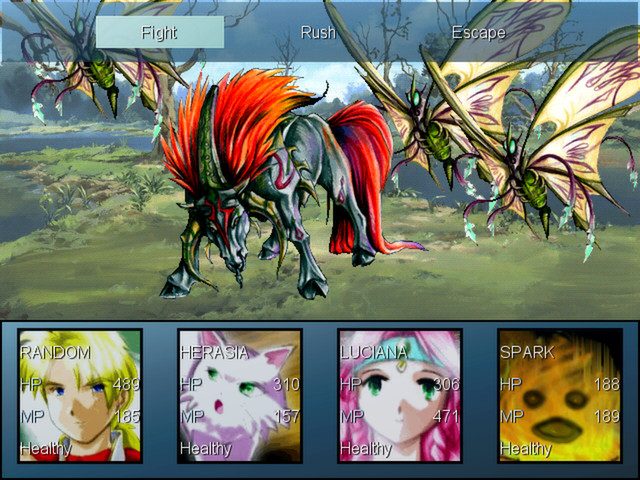 I brought this on myself. I openly admit it, but can anyone blame me? I play so many offerings from the same genres that it's only natural I would encounter a lot of familiar tropes and cliches. It's also only natural I would get sick of those devices cropping up repeatedly, and would beg whatever forces that will listen to send me a game that defies some of those standards. As luck would have it, I stumbled upon 3 Stars of Destiny, a prequel of sorts to the freeware Laxius franchise that runs with a handful of unfamiliar concepts. It cuts out eye rollers like spunky teens and "save the world" premises, running instead with a more stream of consciousness yarn free of over-the-top heroics.

Sadly, these changes don't exactly play out to the game's betterment...

Full disclosure: I've never played any of the Laxius games. However, numerous players have stated you don't need to do so because 3 Stars can stand on its own. After all, it is basically a narrative starting point...

Going into this, I had never encountered the characters Random, Sarah, and Luciana, the titular three stars that are destined to band together. As it turns out, there's someone else who wants to meet them: an orc god called Ozur. You see, he needs energy and learns he can get some by killing the three heroes and absorbing their power. Unfortunately for him, he can't go to them directly because he dwells in a separate plane of existence, and thus must manipulate the trio into coming to him.

You'd think this setup would develop into a pretty decent, if somewhat old school, storyline. However, that part of the tale doesn't so much take a backseat as fly forcefully out the back window and skid for half a block along the pavement. Instead of directly building toward the inevitable showdown, you get to meet the protagonist Random. No, you didn't miss a character naming screen, that's his actual name. I will say that at least developer Aldorlea got away from the usual eager teen archetype with this guy. He doesn't act like your average naive kid who happens to be a sword-swinging prodigy. Instead, he's just a straight-up, unlikable prick... 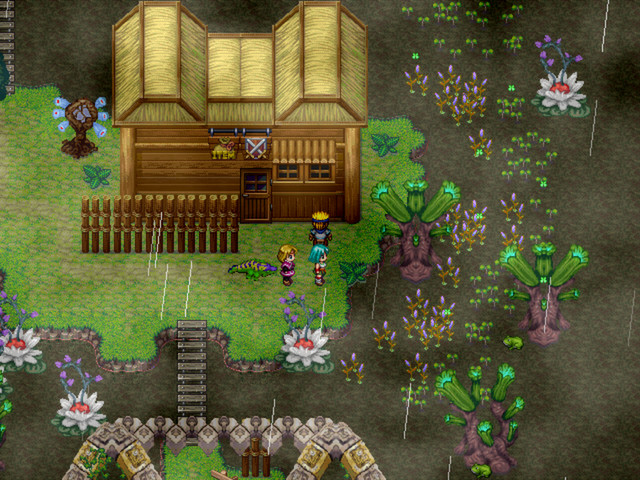 He apparently has the hots for an elf named Sarah, though you wouldn't know it by the way he treats her. He constantly tells her she sucks at fighting and that she's useless, and even goes so far as to coerce money out of her. You only discover that there's a romance budding here when you earn an achievement called "In Love?" Not once did I get the impression there was a love story brewing. So basically this adventure traded one cliche for another, skipping the average teen romance for the "he's cruel toward her because he secretly likes her" nonsense. Whatever, I guess we can ignore this cringe-inducing subplot and just enjoy the campaign.

Except the campaign consists of a string of episodic events that have no tie-in with the established conflict, only some of which provide entertainment. You spend the first few portions of the game chasing Sarah around, engaging in tiresome plot beats that could've easily been edited out. Throughout these travels, you battle stock enemies in your standard, turn-based random encounters that fly by. It isn't difficult to get to a more than satisfactory level early on, or to snatch some powerful pieces of equipment that basically boil fights down to formalities. Needless to say, preliminary moments don't offer much gripping material, and I wouldn't fault anyone for losing interest before truly getting into the heart of the campaign.

The game doesn't pick up even a little bit until you reach a swamp. You only get here because Random decides to do something stupid that causes his party to get lost, so you spend another hefty chunk of the campaign trying to recover from his poor leadership. I will give 3 Stars credit here, because from this point onward you run into very well designed, elaborate dungeons just brimming with worthwhile goodies. This is a concept even some older RPGs get wrong: if you're going to throw out complex dungeons, give explorers rewards that make exploration enjoyable. 3 Stars hands you unique equipment, piles of useful consumables, and an ungodly amount of items that permanently boost your stats, so you seldom feel like you're wasting time when you backtrack or thoroughly check side routes. 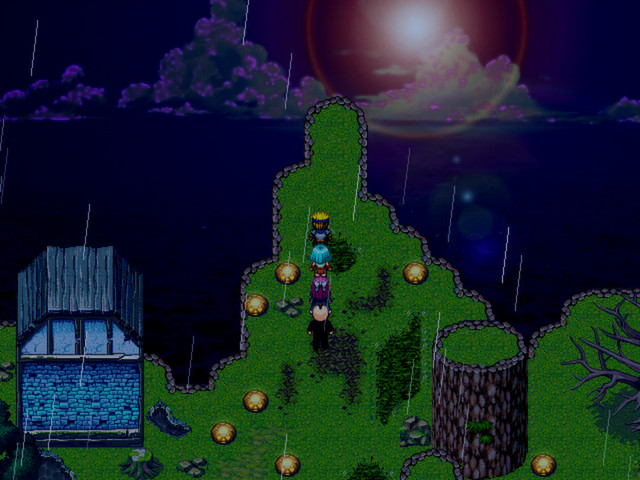 The thing is these levels aren't your garden variety grounds. They usually offer multiple screens spread out over a fairly sprawling grid, and linearity be damned. You might need to pull out a pen and paper to generate your own map like we're living in 1992, and somehow that feels ironically refreshing. In most cases, I would slate a title for not providing in-game charts like a modern product would, but 3 Stars obviously eschews them in an attempt to strike a nostalgic chord, and it actually succeeds in that department.

It's also at this point that you occasionally run afoul of enemies that are worth fighting, including a few super-bosses. Unlike the challenges you meet early on, this battles actually require some level of thought or strategy, rather than merely "auto-battling" your way to victory. Sometimes, wins depend on the items in your inventory, which typically comes as a result of your exploration. If you located some of the hidden rooms spread throughout the various stages, you should have some useful offensive items like dynamite that'll give you en edge against some of the more powerful baddies.

Unfortunately, you only comes across these positives in between more of the same of snooze-worthy scenes and clumsy attempts at comedy. You still bump into a lot of meaningless meandering and Random being an asshole, and the game never really picks up in regards to storytelling or character interaction. Not all of the material on offer is outright bad, but very little of it is memorable or enjoyable. Eventually, you arrive at the town you were initially intended to travel to before Random got everyone lost, and from there the campaign consists of a lot of running from one NPC to another until you get sent to a mountain to collect mushrooms or off to a forest to rescue kidnapped pets. 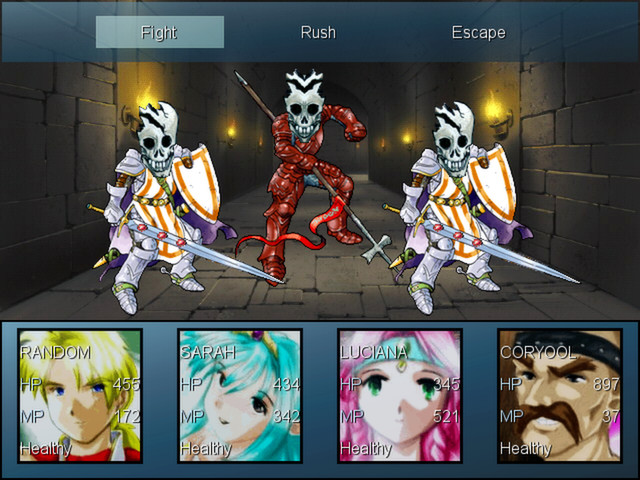 After all of this content, you reach the final area called the Halls of Madness, the surreal lovechild of a town and a dungeon. You spend most of this segment chatting with NPCs, being given objectives that amount to you trying to remember where various characters lie while fighting off elementals and various other weird creatures. Eventually, the conflict established at the beginning draws to an anticlimactic close, all before you're pushed into a finale where your entire party splits into three portions. I sure hope you were actually taking the time to level up the characters you never use, otherwise you're looking at a soul-crushing amount of grinding to get everyone up to speed so you can cross the finish line.

Look, I can't fault Aldorlea for trying new things with this title. It doesn't present your average RPG plot, instead providing you with an experience that's akin to a playable short story anthology starring Laxius characters. However, their attempts to break from some traditions while abiding others doesn't add up to anything special. This is the kind of RPG you'll dig if you're into the basic JRPGs of yore, minus some of the good stories those games told. It's funny, because one of the selling points I've seen a lot of people bring up is that this game "plays like an old school SNES game," as if that's inherently a positive. People forget there were plenty of middling-to-terrible roleplayers in the 16-bit era, and that's about where I'd place 3 Stars.

If you enjoyed this 3 Stars of Destiny review, you're encouraged to discuss it with the author and with other members of the site's community. If you don't already have an HonestGamers account, you can sign up for one in a snap. Thank you for reading!

© 1998 - 2022 HonestGamers
None of the material contained within this site may be reproduced in any conceivable fashion without permission from the author(s) of said material. This site is not sponsored or endorsed by Nintendo, Sega, Sony, Microsoft, or any other such party. 3 Stars of Destiny is a registered trademark of its copyright holder. This site makes no claim to 3 Stars of Destiny, its characters, screenshots, artwork, music, or any intellectual property contained within. Opinions expressed on this site do not necessarily represent the opinion of site staff or sponsors. Staff and freelance reviews are typically written based on time spent with a retail review copy or review key for the game that is provided by its publisher.