Magus is an interesting game. Well, the game itself is the antithesis of interesting, but the simple fact it was released and actually deemed to be worth about $25 back in 2014 is simply mind-boggling. Was the beloved child of a company big-wig in charge of production, causing nepotism to outweigh common sense? Did Sony run an "Anything you come up with, we'll release for whatever you say it's worth!" campaign to inspire anyone and everyone to crawl out of the woodwork with half-baked ideas that never would have gotten farther than the dregs of an indie marketplace otherwise? Was quality control simply asleep at the switch one fateful day?

In case you're still wondering, yes, this will be a bash review. Then again, if you were still wondering, Magus might be for you! We're talking about a dumbed-down amalgamation of action-RPGs and over-the-shoulder shooters that fails to succeed at either genre with anything more than the bare minimum. By that, I mean that you do gain levels and get points to put into stats, as well as learnable skills, giving it action-RPG elements. You also will constantly be tapping R1 to send out streams of magical bullets into enemies, which makes it a shooter.

You start out as a dude in a jail cell serving a sentence that comes to an end about as soon as you start the game, when a female warrior breaks you free. You're not just any old prisoner, though. Your new ally tells you to repeat some words and by uttering them, you tap into your true divine nature. From there, you'll go off on a quest to do such things as get revenge on the king that imprisoned you and try to figure out just how you became a god.

Doing this involves completing a quest that probably won't take any longer than five hours. You'll break out of the jail and do a short trek from that place to a tower. From that place, you'll get access to four regions to explore, leading into a confrontation with the king and then one final jaunt to take on the game's true villain. 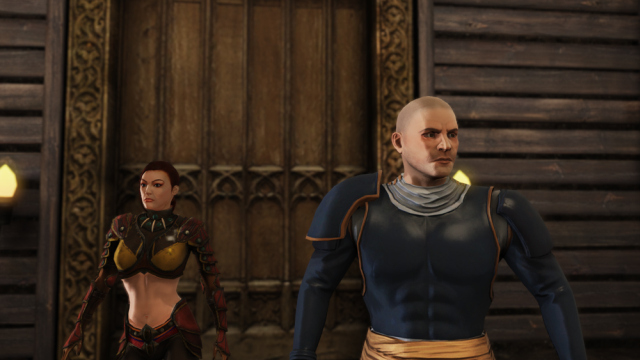 Since the game's name is Magus, you should be able to guess that magic is the key element of your arsenal. By the time you've reached the tower and prepared to pick one of those four regions to explore, you'll have three different colors of magic to fire at foes. Green is a rapidly-firing projectile that happens to be really weak, while Red's shots are really powerful, but can only fire slowly. Blue, the one I tended to use, fits into the middle ground where it doesn't shoot as fast as Green or cause quite the same damage as Red, but still is perfectly equipped to blast through everything you'll come across.

I could tear into all sorts of flaws this game possesses, but the one that dwarves them all is a complete lack of challenge. Not only do you control a god in Magus, but you'll feel like one. A vengeful one beyond ready to enact all sorts of plagues and suffering upon every single being unfortunate enough to reside in your realm. All enemies, regardless of size or species, utilize the same tactics. The majority are melee fighters who will casually jog up to you even if their route takes them directly into your line of fire. The rest use ranged attacks and will find themselves to be sitting ducks when you shrug off their pitiful attacks and blast them into oblivion.

I mean, my basic attacks were so strong, I barely can tell you anything about nearly all of the skills that can be unlocked. I got a fair amount of use from a Green fire spell simply because it was great at crowd control -- a good thing considering that many fights have 10 or more hapless and helpless dolts hoping they can at least provide a momentary speed bump by virtue of numbers. Other than that, I didn't see fit to experiment with anything. No raising the dead, no buffing my attack or defense, no nothing. When you can easily run through everything with the bare minimum, there's no motivation to diversify your offense.

Even if you weren't an overpowered force of nature by yourself, well, you're not alone! That female warrior who broke you out of jail and helped you discover your divinity will be by your side throughout your quest. She might not be a god, but she is a tank who will distract the majority of your foes. That's right, instead of being assaulted by a dozen soldiers, the lion's share of that group will converge on her, allowing you to pick them off from a distance. 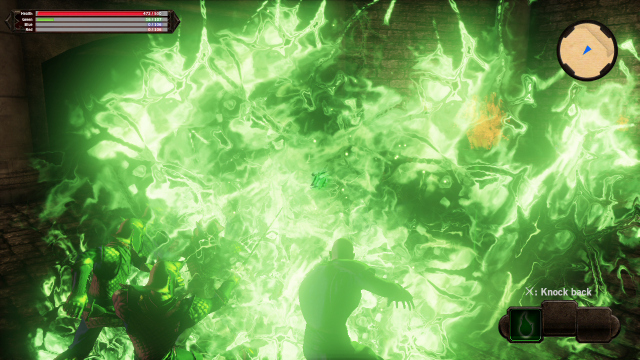 Astoundingly, there's still more! When you finish the Mines and Desert levels, you'll gain allies who will reside in the tower. One will identify runes you discover so that you can equip them, while the other converts all your left-over equipment into stat-boosting scrolls. The end result: You'll go from mega-powerful to mega-mega-mega powerful. This game hands you so many built-in advantages, it feels like it was made for people who think the average Casual mode is a bit too intense.

By now, it should be obvious why this game fails. When you essentially have no challenge, there's no feeling of accomplishment. You just have a short game that still wears out its welcome long before its conclusion. I don't even need to delve into its other flaws to illustrate how unessential Magus is.

I don't have to talk about the glitches, such as when I fought the boss of the Mines and he got hung up on scenery and spent a lot of the fight uncontrollably bouncing up and down in place. Sure, it was funny to watch a massive ogre look like he's performing history's most inept circus acrobat audition, but I don't think that was how things were supposed to unfold. I also don't need to even mention how every single level is a linear slog. You'll regularly have your progress stopped by locked doors and have to travel down side paths to obtain the keys to advance past them before doing it all again in the next section of the level. It's not a good sign when I'm regularly consulting the map screen to see just how much farther I have to travel before I can be done with one boring and sparsely decorated location or another.

Sure, I didn't have to mention those things, but I did. Mainly because it was fun, but also as a form of therapy. Magus is the sort of game that eats at your mind. Not because of anything it does or any of the many flaws it has, but due to the confusion you'll feel while trying to wonder just how it was released on a major system for a noticeable amount of money. It's short, it's laughably easy, it's boring, it's a bit on the glitchy side and it offers next to nothing -- even for people like me who are so addicted to fantasy action-RPGs they can find the silver lining in nearly every one they sample. In a perverse sort of way, this is an accomplishment, but not one I'll be praising!

If you enjoyed this Magus review, you're encouraged to discuss it with the author and with other members of the site's community. If you don't already have an HonestGamers account, you can sign up for one in a snap. Thank you for reading!

© 1998-2021 HonestGamers
None of the material contained within this site may be reproduced in any conceivable fashion without permission from the author(s) of said material. This site is not sponsored or endorsed by Nintendo, Sega, Sony, Microsoft, or any other such party. Magus is a registered trademark of its copyright holder. This site makes no claim to Magus, its characters, screenshots, artwork, music, or any intellectual property contained within. Opinions expressed on this site do not necessarily represent the opinion of site staff or sponsors. Staff and freelance reviews are typically written based on time spent with a retail review copy or review key for the game that is provided by its publisher.