Released in 1996, the original Star Ocean came along too late in the Super Famicom's lifespan to get ported over to the United States -- at least until it was remade for more modern systems. In some ways, that was a shame, as this game really pushes the system to its limits. During the opening credits, you'll discover some really impressive visuals, as well as voice acting, thanks to a special compression chip. Combat is more action-oriented than the typical RPG, with fully-animated heroes and enemies moving around the screen and performing attacks. There is a lot of depth to character customization, with everyone capable of gradually learning and mastering an assortment of skills in order to get better at such feats as being able to identify items found in dungeons, as well as creating their own equipment.

The thing is, I'd already played Star Ocean: The Second Story when it came out on the PlayStation. In comparison, this game feels like a trial beta. There are some good ideas present and I can't deny enjoying my time playing through it, but it does feel somewhat unrefined and clunky compared to its first and best sequel. If I really wanted to be uncharitable, I'd say its best feature is brevity. It took about 20 hours to clear the main quest and that felt very appropriate. If it was the length of The Second Story, I have the distinct impression its flaws would have really caused it to outlast its welcome long before I'd completed its seemingly tacked-on final dungeon.

The plot is serviceable, if not the most inspiring. You start on one of those less-developed planets that all the Star Ocean games tend to spend most of their time on, despite how they are marketed as sci-fi entries in the RPG genre. Youngsters Ratix and Milly find their little corner of the world is under siege. Not from bandits -- you'll waste no time sending them running in a quick series of easily-won battles -- but from a mysterious disease that gradually petrifies anyone afflicted.

Our heroes embark on a standard generic RPG quest to find a flower on a mountain with mystic healing properties, but just as they reach it, something a bit less standard and generic happens. Out of nowhere, a pair of strangers materialize in front of them. Ronixis and Iria are members of the galactic federation and are disobeying orders to not interfere in the lives of less advanced societies in order to lend a hand. This leads to the quartet eventually going through some sort of wormhole to Ratix's planet in the past in order to find a cure for the stone plague. 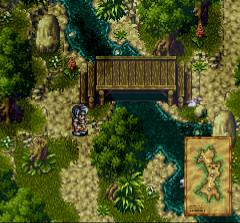 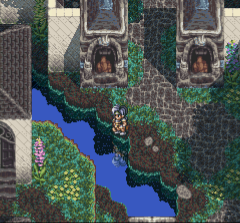 From there, we have a fairly typical journey that has Ratix and company get separated and (eventually) reunited, find new allies, solve issues plaguing the local kingdoms and go on a plot coupon quest to earn the approval of all the world's kings and get access to the ominously named Demon World. Sort things out there and there will be one final dungeon hosting a powerful being determined to cripple the federation.

Despite the futuristic premise with its galactic federation, spaceships and time travel, this game provides standard medieval stuff with knights and castles and temples for the majority of its duration. Almost saving the day is a pretty fun battle system somewhat marred by questionable A.I. for your computer-controlled allies, as well as lots of character customization.

You'll control Ratix with the computer handling the other three active characters. Your job will be to tap the attack button and watch him run around the screen and bop the selected enemy with his sword. For a change of pace, you can use the shoulder buttons to use the various skills he collects throughout the game. As far as Ratix goes, everything is good. Just don't always count on help from his pals.

The roaming warrior Cius is a powerful melee ally, but the game also has him move slowly and erratically, at times sitting out fights if no enemy gets close to him even if you've set his A.I. to have him go all out. Joshua is a very powerful mage, but he has no sense as to what spell is best suited to a situation. He'll just randomly cast the ones he's learned and if that leads to him healing the monsters in a given locale, it's up to you to deactivate the offending abilities. Speaking of mages, they have no self-preservation instincts. If you see a monster homing in on one, you better make that foe Ratix's target or someone's getting utterly wrecked while standing there and taking it like an idiot.

Even with those annoyances, I tended to enjoy fighting, as battles were fast-paced and felt more interactive than the norm. Good thing, as it really pays to get into lots and lots of fights. Every time a character gains a level, he or she obtains a number of points that can be placed into various skills. Some of these improve a person's fighting ability. Mages can cast spells immediately instead of having a pause between taking and completing that action, while fighters can get the ability to counterattack or flip behind a foe in order to attack it from behind. 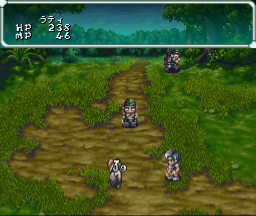 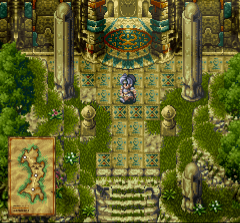 Other abilities can improve a person's stats and/or help them in learning a skill such as crafting, smithing, writing or music. If you pick a character to focus on one of those skills, you'll want to have them REALLY focus on it. Take crafting for example. With a low rating in it, odds are you'll be wasting that iron or gold you've been collecting, as you'll only be able to create useless junk. Put a bunch of points into the correct abilities, though, and you'll be able to regularly churn out very useful accessories such as charms capable of protecting against various status ailments.

Star Ocean has a lot of cool elements, but the overall product has enough pitfalls to prevent it from being much more than "pretty good" or "reasonably fun". There's a lot of backtracking in this game -- something that becomes a problem when you discover the closest thing to fast travel are ships at ports than can take you to a tiny number of locations, making it likely youll still have a lengthy walk to wherever you were going.

Near the midway point of the game, your team will be traveling to one of those port towns and will notice something falling from the sky to a previously-explored location. You'll abruptly decide to put off what you were doing to investigate that incident, leading to a ship ride and a long walk over ground you've already covered while regularly getting accosted by enemies who currently don't even qualify as speed bumps. Then, when you get to that location, you'll just have a bit of conversation and need to retrace your steps to get back on the ship, only to find it takes you to the other side of the continent youd been exploring. Time to walk across that entire place in order to get back to where you had been and take another ship to the next land! This sequence added about an hour to my time with this game without accomplishing anything of note other than sucking all the fun out of my experience for that duration.

Star Ocean is a flawed game, but its combat system and character customization options make it worth playing through. Its easy to see the building blocks that eventually became its one legitimately great sequel -- tri-Ace just wasnt there yet, which probably shouldnt be a surprise as this was the fledgling companys first game. All in all, this is a good companion piece for The Second Story, as playing them both really allows a person to see the improvements made in nearly every aspect from one game to the next.

If you enjoyed this Star Ocean review, you're encouraged to discuss it with the author and with other members of the site's community. If you don't already have an HonestGamers account, you can sign up for one in a snap. Thank you for reading!

© 1998-2021 HonestGamers
None of the material contained within this site may be reproduced in any conceivable fashion without permission from the author(s) of said material. This site is not sponsored or endorsed by Nintendo, Sega, Sony, Microsoft, or any other such party. Star Ocean is a registered trademark of its copyright holder. This site makes no claim to Star Ocean, its characters, screenshots, artwork, music, or any intellectual property contained within. Opinions expressed on this site do not necessarily represent the opinion of site staff or sponsors. Staff and freelance reviews are typically written based on time spent with a retail review copy or review key for the game that is provided by its publisher.