Originally developed by Masaya, Gynoug is a horizontal shooter originally released for the Sega Genesis in Japan in 1991. Later that same year, short-lived publisher DreamWorks, Inc. brought it to North America as Wings of Wor. The company shut its doors not long after that final offering, which limited any marketing efforts. Today, not many gamers outside of Japan have heard of the game under either of its titles.

But Gynoug was always pretty good, and it was reasonably well received by those genre fanatics who did manage to snag a copy. Certainly it deserved a better fate than to languish in obscurity for decades. And so it is that in an unlikely but welcome turn of events, prolific indie publisher Ratalaika Games has brought the shooter back for Nintendo Switch, Xbox One and PlayStation 4. This seems to be part of an emerging pattern; the company also revived Gley Lancer earlier this year. 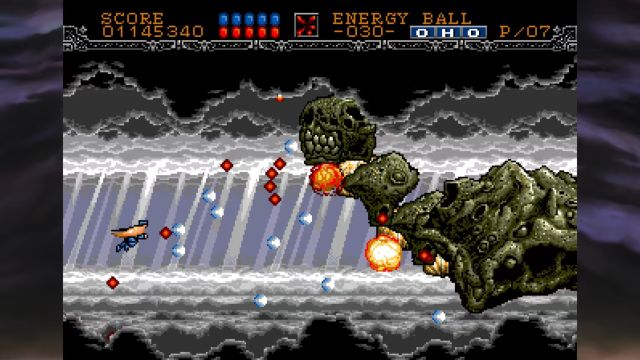 What should you expect from Gynoug here in 2021, then? The short answer is that you'll get about the same game you always could, except now it's offered as a digital-only experience with some extra menus on the front end so you can apply visual and gameplay modifications beyond anything the old "options" screen permitted. Happily, the result is a spiffy little retro package that fans of old school shooters shouldn't miss.

If you are familiar with Masaya Games, you quite possibly remember the studio for the early Cho Aniki games, which featured rather distinct art design. Gynoug isn't quite so memorable, but neither does it offer just one more nondescript spaceship blasting through swirling clouds or an uninspiring black expanse. You control a winged celestial warrior battling a powerful demon force. This means you get to use holy magic and firepower as you wrestle with monstrosities that blend technology and freakishness.

The game spans several lengthy stages, which are broken up by mid-boss encounters along the way. Environments are interesting and range from the sea floor to volcanoes to the heavens, but the forces of evil are definitely the highlight. Your adversaries are large and often fill up a hefty portion of the screen, dealing out punishment as you try to survive long enough to find and exploit their weak points. Pattern memorization becomes essential if you want to get through the campaign without losing a lot of lives and continues... or at least without taking advantage of some features new to this release. 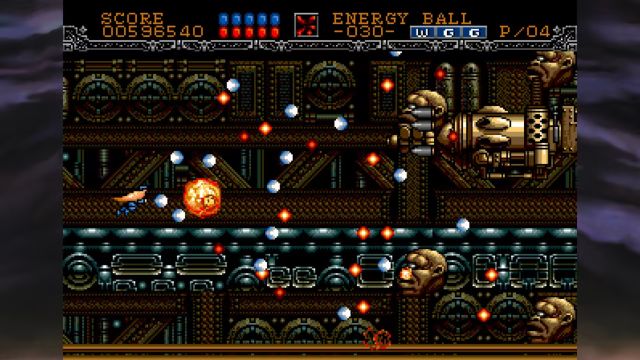 In ye olden days, you could choose how many continues you wanted to start with, select from four difficulty settings, and listen to catchy tunes from the soundtrack. That was pretty much it. Now, though, you can make more comprehensive adjustments whenever you like. They're the perfect way to bring a tough old game to an audience that is either growing feeble or never had the skills in the first place.

The best feature in this regard is the rewind feature, which allows players to press a shoulder button whenever they'd like to undo a cheap shot. The angel Wor becomes significantly less impressive when he falls out of the sky after taking a hit, so it's nice to be able to undo such disasters conveniently. Players can even customize how quickly they rewind, if they find the game doesn't erase quite enough in a hurry. With this feature in place, the game becomes much more manageable, even though it may still frustrate some players who haven't mastered the basics of crowd control. There are a lot of demons here.

A separate "Cheats" menu allows players to impact the general flow of the game in other ways. If they want Wor to retain his power-ups when he takes a hit, that's possible. Or perhaps they want unlimited credits so they can practice difficult stages until they're able to get through them without continuing. Infinite lives are also an option, as is the ability to spam magic as often as desired. Finally, there's an invincibility option, in case you don't want to have to worry about taking a hit at all. This approach is welcome, because it lets you decide just how much you want to wuss out while playing (or if you want to at all). 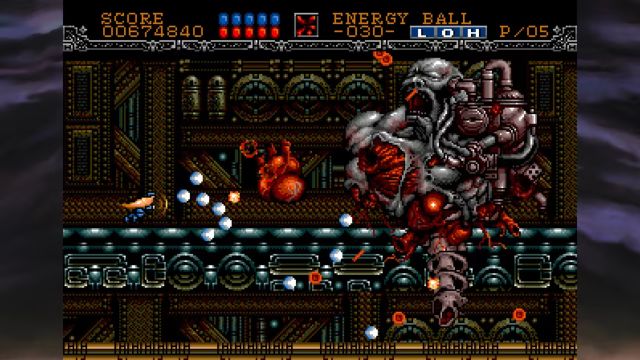 Other tweaks impact the game's visuals. There is an optional CRT filter, if you want the view to look more like it might if you had hooked up a really old television. However, the developers didn't stop there. You can tweak the filter's presentation in a surprising number of ways, rounding out corners or applying saturation or tone or whatever else. Maybe you can't quite replicate the feeling of playing on legitimately ancient hardware, but you can come pretty close.

Gynoug's fate was determined a long time ago. There's little likelihood it will ever be commonly remembered as a major entry in the shooter genre, but the lack of accolades doesn't tell the whole story. It's a lot of fun to play, with atypical visuals, a peppy soundtrack and fearsome bosses. With the quality-of-life improvements that are exclusive to this new release, Masaya's original effort feels like a classic experience that pretty much anyone should be able to enjoy (unless they just plain hate the genre). This is how you bring back forgotten retro games. One can only hope the right people are taking notes and looking at other deserving gems to rescue from obscurity.

If you enjoyed this Gynoug review, you're encouraged to discuss it with the author and with other members of the site's community. If you don't already have an HonestGamers account, you can sign up for one in a snap. Thank you for reading!

© 1998-2021 HonestGamers
None of the material contained within this site may be reproduced in any conceivable fashion without permission from the author(s) of said material. This site is not sponsored or endorsed by Nintendo, Sega, Sony, Microsoft, or any other such party. Gynoug is a registered trademark of its copyright holder. This site makes no claim to Gynoug, its characters, screenshots, artwork, music, or any intellectual property contained within. Opinions expressed on this site do not necessarily represent the opinion of site staff or sponsors. Staff and freelance reviews are typically written based on time spent with a retail review copy or review key for the game that is provided by its publisher.