My experiences with mobile gaming haven't all been Kemco and self-hatred. Well, maybe self-hatred, but at least Kemco hasn't always been the reason!

The first game I spent any quality phone time with was Final Fantasy Record Keeper. As might be expected from a free-to-play gacha title designed as a nostalgia trip for fans of the long-running RPG series, there wasn't much of a story beyond a kid traveling through paintings containing all of the FF titles, collecting allies from each one while fighting an assortment of enemies and bosses.

At least back when the game came out in 2014, the "free" part of "free-to-play" was a big, fat lie -- at least if you wanted to make any progress in a feasible amount of time. It didn't take long until I felt I'd hit a brick wall. My characters possessed stats and equipment insufficient to readily overcome the game's challenges with a good enough rating to obtain all the possible prizes, as well as unlock more challenging versions of each confrontation. Making matters worse, my account had so little stamina that if I failed once or twice, there was no chance of getting a third attempt until a couple hours had passed and that meter had refilled. Since there was no way in hell I was going to spend money to either buy more stamina or opportunities for better equipment or skills, my interest quickly waned and that's how the Kemco Khallenge wound up getting started.

But this story wound up having a happier ending for Record Keeper than it merely being the reason I penned way too many half-hearted reviews for way too many games that I half-heartedly played through. During the Great Pandemic of 2020, that damnable demon named nostalgia reached into my brain and squeezed it until I decided to re-download this game and start from scratch, with an intent to slowly, but surely, advance through its many challenges even if it took the rest of my life. Or something like that -- my attention span does leave much to be desired.

To my amazement, Record Keeper was a far superior experience than I remembered. One reason was obvious: Over the years, a lot more content had been added. The other was the pleasant surprise that the programmers made things infinitely more friendly to those of us who like to emphasize the FREE part of free-to-play. Items that can be used to replenish stamina are constantly being dropped to the degree that people could likely play this thing regularly without ever needing to open their wallets. And I found myself constantly having high-quality equipment draws thrust upon me, making it possible to quickly obtain enough high-end stuff to make the early-game challenges child's play and the tougher ones at least doable. 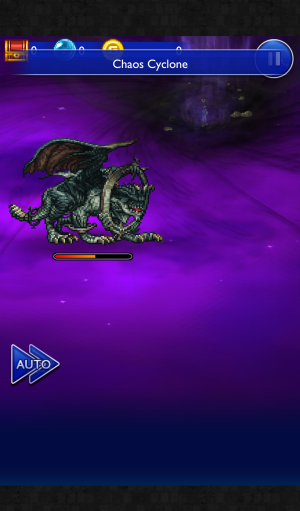 I could progress through Realm dungeons that took me through all the numbered FF titles and their spin-offs, as well as others like Final Fantasy Tactics and Type-0 -- doing both the normal and expert version of each. I broke level caps for heroes once, twice and even three times. I delved into all sorts of new content such as the more story-driven Record dungeons and the challenging battles of the Torment and Magicite dungeons. I even got to experience the creation of 2021's Labyrinth dungeons, as this is one of those titles that seemingly has the potential to generate additional content until the end of time and possibly beyond.

And I enjoyed myself for quite some time. I had fun fighting major adversaries from multiple generations of systems -- all drawn in a modernized take on 16-bit sprite art. I enjoyed watching characters get more and more powerful and gradually gain access to more and more challenges. Several nights per week, I would notice that a good hour of my time was devoured by this game because there always was more tinkering to do, more skills to purchase and hone to greater power, more challenges to access. Since every character gains stat boosts if they're going through fights from their game, I had a large crew to maintain, as I'd never knew just when I'd have to dust off people from a lesser-used game such as the original Final Fantasy.

Now, the alert reader might notice that there's been a lot of past tense being used in these last few paragraphs. Yeah, it's been a number of weeks since I tapped on this game's app button and, as far as I'm concerned, it'll be infinity more weeks before I do so again. Conforming to my expectations for free-to-play games, Record Keeper ultimately proved to be junk food. It can be intensely satisfying while you're devouring it, but if you step back from the table, you'll quickly realize it's just empty calories providing little in the way of actual fulfillment. There's just no real sense of accomplishment. I'd completed every available Realm dungeon on Normal, but there was no time to celebrate. I still had tons of Expert Realm dungeons, as well as other challenges. And by completing anything, I was getting closer to unlocking entirely new stuff. The more I did, the more there was to do. 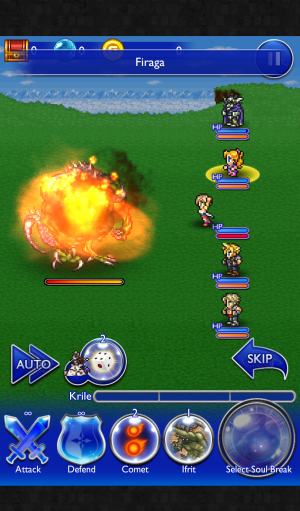 It was never-ending and the sad truth is that this game's combat is too simplistic and stripped-down to maintain one's interest for an overly-long period of time. While there are numerous deviations from this formula, the average Realm dungeon takes place in three phases. The first two consist of three battles against various monsters from their given game, while the third may or may not have a couple battles against those foes before sending you against one of its game's bosses. There's little to be said about the regular monsters. While some of them are more durable and dangerous than others, they usually serve as cannon fodder. Bosses are somewhat accurate to their battles in the actual Final Fantasy games. The mechanics might be a bit more simple, but things will feel similar with many of their tricks and special attacks being on display.

Replay all of these fights on Expert and you'll get exactly the same thing with the exception of how everything -- especially bosses -- gains power and durability. As you're progressing through these fights, you'll be gradually completing challenges that eventually unlock new battle types. And things rapidly got tedious and my interest began to fade. Nightmare and Magicite dungeons are little more than collections of fights against more powerful versions of bosses I'd defeated in those Realm dungeons. Labyrinth dungeons just sort of dragged on, mixing battles with treasure rooms. All of it felt like filler designed to keep a player sucked into a never-ending cycle of building up characters and enhancing weapons and spells, while compulsively and obsessively looking for something else to attain in a never-ending quest.

The Record dungeons came closest to breaking that mold. Giving you a handful of characters, each chapter of this feature had you actually play through sections of various Final Fantasy games and enjoying their stories while also experiencing an original tale. Sadly, I'll never find out how that story ends. The Record dungeons are tied in with everything else, with each new chapter being unlocked as you've progressed further through everything else. So, if I wanted to continue with that, I'd have to resign myself to hours and hours of those less-interesting challengesand that's not happening.

I can't be too hard on Record Keeper. It's a free mobile download that, over its lifespan, has become user-friendly enough to actually remain free -- at least for gamers capable of exercising any moderation. It possesses a ton of things to do and provided me with both an entertaining diversion and an enjoyable nostalgia trip for quite some time. It just doesn't have the necessary juice to keep the good vibes flowing indefinitely and its attempts to do so have led to lots of busywork and tedious battles against tougher and tougher versions of bosses I'd likely fought multiple times in reaching that point. I had fun with this game for quite some time and then, one day, I realized I was no long having fun and was playing it out of habit more than anything. And that realization led to the end of my second and (hopefully) last stint with it.

If you enjoyed this Final Fantasy Record Keeper review, you're encouraged to discuss it with the author and with other members of the site's community. If you don't already have an HonestGamers account, you can sign up for one in a snap. Thank you for reading!

© 1998-2021 HonestGamers
None of the material contained within this site may be reproduced in any conceivable fashion without permission from the author(s) of said material. This site is not sponsored or endorsed by Nintendo, Sega, Sony, Microsoft, or any other such party. Final Fantasy Record Keeper is a registered trademark of its copyright holder. This site makes no claim to Final Fantasy Record Keeper, its characters, screenshots, artwork, music, or any intellectual property contained within. Opinions expressed on this site do not necessarily represent the opinion of site staff or sponsors. Staff and freelance reviews are typically written based on time spent with a retail review copy or review key for the game that is provided by its publisher.