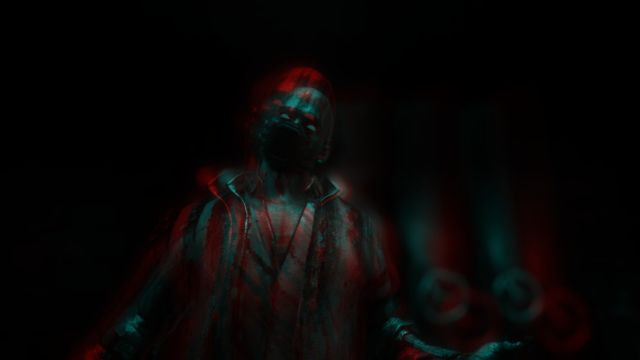 Gridberd is yet another lackluster, delisted horror title, and yet I hesitate to put it in that loose category. For the most part, horror games that fell off of Steam's marketplace have one huge thing in common: they're tiresome, uninspired asset flips full of cheap scares and weak stories. Most players come away with the impression that they were programmed with minimal effort in an attempt to snag quick dollars from undiscerning consumers, often using free or low cost engines like FPS Maker. This one, though, isn't cut from that cloth. It uses Cryengine, shows off rather impressive visuals, and shows actual shades of inspiration. It's just a shame its campaign is a mess...

Seriously, though, Gridberd looks grotesquely beautiful. Its visuals remain smooth pretty well throughout, with environments bearing dull to glossy sheen. A mixture of semi-photorealistic graphics and grays and earthy tones instills a 2000s horror film vibe, when contemporary directors were drawing inspiration from '70s exploitation flicks. Now combine all of this with your current surroundings and you get a very solid sinister mood that looms over you more than the plot's antagonist...

You see, this is yet another "creepy old house" offering, but this one isn't full of ghosts, poltergeist phenomena, and cliched messages written in blood. Instead, it's a peculiar mansion with an unconventional design that's full of windy corridors and spaces that make absolutely no sense in the best way. The abode is part haunted hotel, part dark dungeon, part torture chamber, part containment facility... You travel through hallways full of messy bedrooms and blood-spattered furniture, only to plummet into a sewer-like lower region, before eventually making your way to a the kind of generator you would see in a huge public building rather than a private home. Before long, you venture into the "backyard," which is really more of a pathway into a forest just bursting with vegetation and wildlife. 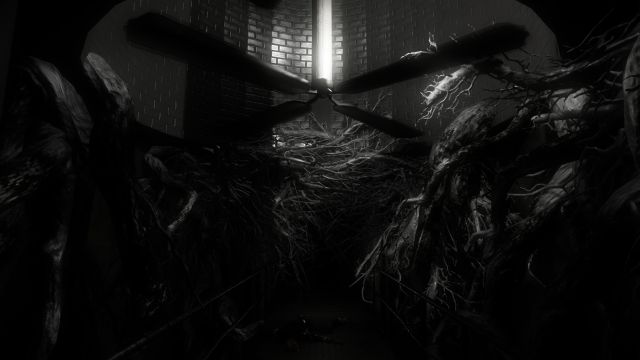 Obviously, you're no casual visitor to this home, nor even a technically a willing participant into the events transpiring in the campaign. You take the role of a man named Sam who awakens in the depths of the mansion, having been captured by a masked, axe-wielding maniac named Kary Johnson. From the very instant you lay eyes on him, you know the dude is built from the same age-old horror concepts that gave us fiends like Jason Voorhees and Michael Myers. The dude's metal mask gives him a supervillain quality, while his chiseled physique and ragged clothing definitely pin him as the kind of guy you don't want to cross in a dark alley--or a well lit alley--or a well lit anything, really. Look, you just don't want to meet this guy...

In the opening segment, he hits you with a lot of random musing before introducing you to his axe, named "Joseph the Babe," before letting you know that he's going to sharpen his chopping device so he can cut you up into little pieces. He ambles off and that's your cue to wriggle free and run as fast as you can.

Only you don't run at all. In fact, throughout the whole experience, you mosey slllllloooooooowwwwwwlllllyyyy through the manor, without even possessing the option to sprint. It's even worse when you have to crouch, because that's when Sam advances like he has a broken ankle. Straight off, this can only mean a couple of things:

1) Chase scenes, if they occur, will be either nearly impossible or anticlimactic. In the former, there's no way you can elude a true threat by simply tiptoeing away. With the latter case, if you do manage to just trudge off in the face of impending doom, the your foe becomes a laughable, toothless adversary whose initial fear factor has been squandered.

2) There will be little to no chases in this game, and it will mostly be a straightforward walking simulator with a few frights.

Case number two wins this one... 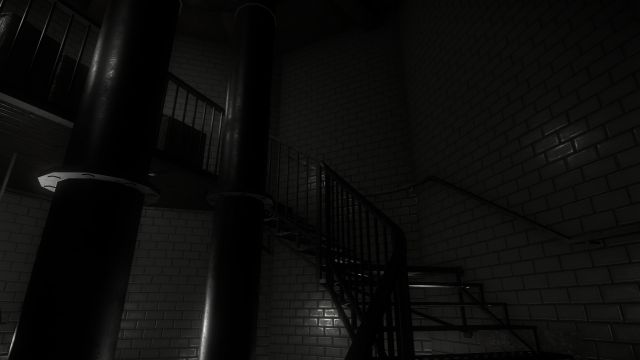 Gridberd's campaign consists of you slogging through long hallways, trying to guess your way through the house and off to freedom while fighting off the Dear Esther-level torpor that it conjures. Now and then you catch some visual scares, like Kary dragging a body through a closed-off hallway or a corpse tumbling out of a room after its door mysteriously opens. And worse, when you return to that place, the cadaver disappears and the door remains shut once again. Obviously, Kary has been nearby and just barely missed you.

The way this game works is kind of odd. You only gain access to certain areas after you've completed very particular, vague tasks. Sometimes a door won't open until you've read a note or listened to a radio broadcast or something to that effect. During other moments, the game actually punishes you for wandering down the wrong shadowy hallway. At those points, Kary bounds towards you out of nowhere and slams you to the floor. A "game over" screen covers your monitor while the sickening sound of Joseph the Babe turning you into cutlets plays in the background.

Needless to say, this "wander in the correct unclear direction" style of play grows wearisome quickly, and the campaign becomes more nonsensical as you advance. For one thing, Kary captures you multiple times and you somehow happen to slip away each time. It's like he wants you to escape. More than that, you'll encounter a few occasions where you could easily run off to freedom. The aforementioned backyard wilderness would've been an obvious escape route, even with the short gate around the perimeter. You can't tell me Sam didn't at some point thing, "Maybe if I run into the woods I can find an escape route or climb a tree and use it to get over the fence." No, instead you end up sneaking around the side and re-entering the house. 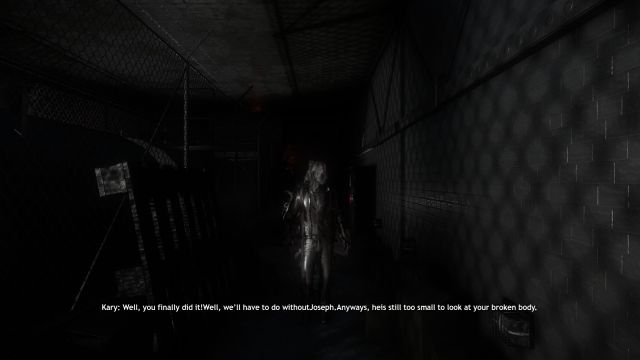 A plot twist eventually hits you, but doesn't leave much of an impression. The game's storyline isn't particularly awful, but it fails to pique your interest enough to actually care when you discover the truth about Sam and Kary and their connection. As you might've predicted, this is one of those experiences where you come out almost sympathizing with the monster rather than rooting for the protagonist, and that alone makes you care even less about actually escaping.

More than anything, Gridberd possess the potential to be a great horror title, but wastes it on sluggish walking simulator gameplay. Granted, it's refreshing to know this isn't another "run away from a monster" or "haunted house full of tired tropes" affair, but at the same time this adventure didn't make the best use of its eerie possibilities. A setup like this screams "taut interactive slasher," and instead we get Dear Leatherface.

If you enjoyed this Gridberd review, you're encouraged to discuss it with the author and with other members of the site's community. If you don't already have an HonestGamers account, you can sign up for one in a snap. Thank you for reading!

© 1998-2021 HonestGamers
None of the material contained within this site may be reproduced in any conceivable fashion without permission from the author(s) of said material. This site is not sponsored or endorsed by Nintendo, Sega, Sony, Microsoft, or any other such party. Gridberd is a registered trademark of its copyright holder. This site makes no claim to Gridberd, its characters, screenshots, artwork, music, or any intellectual property contained within. Opinions expressed on this site do not necessarily represent the opinion of site staff or sponsors. Staff and freelance reviews are typically written based on time spent with a retail review copy or review key for the game that is provided by its publisher.