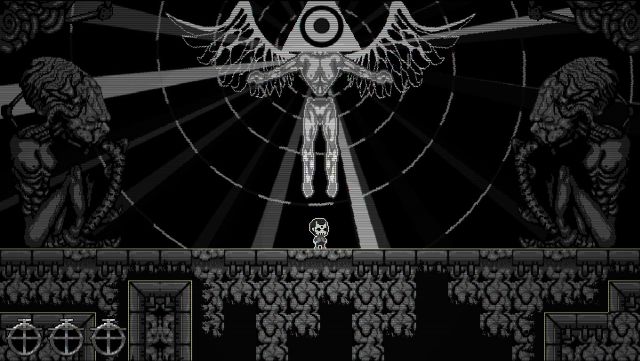 Tamashii begins the way any good, brutal platformer ought to start: with a pyramid-headed deity willing you into existence. He then informs you that something has corrupted one of his temples, and he needs you to investigate and clean out the corruption. You set off without protest, because what else can you do when a radiant, otherworldly creator gives you orders? You encounter a lot of things worth questioning in this adventure, but the nature of your mission isn't initially one of them...

From here, you venture into your average tutorial level, where the game pretty much confirms that it's a hybrid of Super Meat Boy and Escape Goat, with a dash of blasphemous content for good measure. You get the usual move set that includes quick movement and double jumps, though wall climbing remains absent from this outing. Instead, you can create temporary, stationary clones of yourself that aid you in completing the game's elaborate puzzles. You'll notice right off that the mechanics don't present much of an issue, and are actually quite solid.

However, once in a great while the jump button decides it doesn't want to respond, and you're left standing there like a sitting duck. Thankfully, this snag seldom presents an issue. Even when it does, you get infinite lives paired with either short levels or plenty of checkpoints, so getting robbed doesn't sting so much. 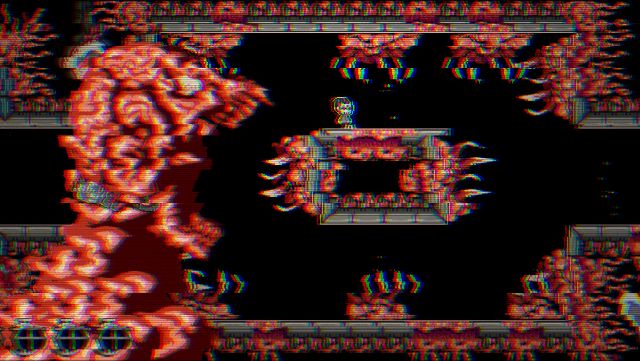 After a brief education, you arrive at the temple and glimpse all manner of oddball stuff. Humanoid figures attached to the environment tremble in the background, and sometimes skinned bodies relate their fears and woes to you. Occasionally, a horrifying face pops up on the screen, and your surroundings transform into a world apparently made of entrails and nerve endings. It disrupts your quest just a little, and leaves you wondering if you did something wrong and whether or not you can fix it. Then, just as quickly as it arrived, the manifestation vanishes and you're back in the temple.

Each doorway therein takes you to a variety of strange places, most of which seem to serve no purpose. You enter one that looks like a standard household, though you can see a hidden door behind a wall without any indication regarding how you can access it. In another area you run an impossible gauntlet of traps, loaded with spikes that thrust upward, arrow-shooting devices, and massive, crushing lumps of flesh. You have no idea how you're going to survive this one, and then the game "glitches." You clip through a wall and think that maybe you should reload your save file, but a trace of doubt remains in the back of your mind: maybe this is intentional. So you ride it out and it takes you to a near-fourth wall breaking zone full of graphical bugs and old game references.

Because why the hell not? This game already isn't what we conventionally call "normal," so why not just go balls-out on the weird? Thankfully, developer Vikintor did just that...

Other huge archways take you to the proper challenges, where you see even more peculiar, sinful material. Giant mouths open wide to seductively lick other parts of the environment, and hideous background creatures apparently make love to themselves. In other place, familiar religious images twist and pervert into something like H.R. Giger via H.P. Lovecraft, and even if you're not the religious type, you can't help but feel a little uncomfortable. Obviously, that's what this title was going for, and it succeeds effortlessly. 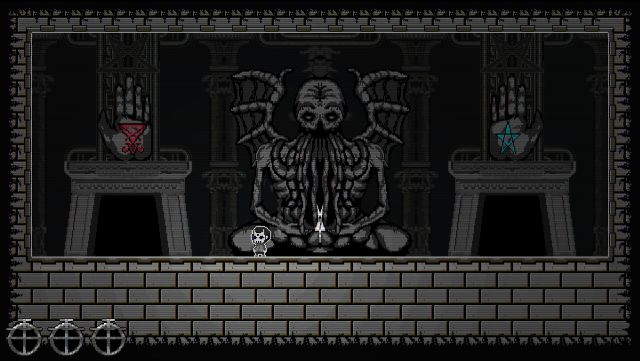 The trials you face don't quite measure up to Meat Boy in regards to challenge factor, but thankfully still give you a run for your money. Mainly, you bump into plenty of scenes that involving exact timing and precision. For instance, one level requires you to mosey down a corridor while tidal waves of some killer white liquid surge across the top and bottom. You have to time your jumps exactly to get by the upper the tide without dying, only to eventually backtrack and voyage the opposite direction after you complete your first objective. You also need to move in rhythm with the goo waves, otherwise you could be stuck in a situation where you'll have to wait for a crest to pass by. If you're unlucky, you might get stuck on a pressure plate that activates a trap when you sit on it for more than a second, potentially killing you and wrecking the level's progress.

Each stage revolves around the aforementioned clone creation feature. You'll find colored sigils all over the campaign, each of which activates while you stand next to them. Doing so changes toggles blocks of the same color, either making them solid or allowing you to pass through them. That way you can create platforms in places where they're needed, or temporarily take out certain walls. Since you can't hold still and expect to complete the level, you'll need to drop a body double to keep the symbol active. However, you must take heed because your stand-ins die after a short amount of time, you can only generate up to three, and you'll definitely require at least one to operate the switch that opens the exit. Obviously, you're going to need to let some of them perish in order to generate more of them, because some stages require more than three clones total to solve their puzzles. Thankfully, you can shorten their lifespans with the press of a button, allowing you to eliminate older ones more quickly so you don't have to sit there and gawk at the screen for ages.

You find yourself planning ahead and experimenting a lot. These stages definitely get your gray matter going, but won't exert such force that you walk away with a migraine. You find that each segment is easily doable, with a few tricky snags that crop up every so often. You'll often find yourself dropping a couple at a time, also making use of handy devices that move your clones around the area. Eventually, you let one die, generate two more, drop through an opening, and avoid oncoming fireballs from a severed hand jutting out of the wall... 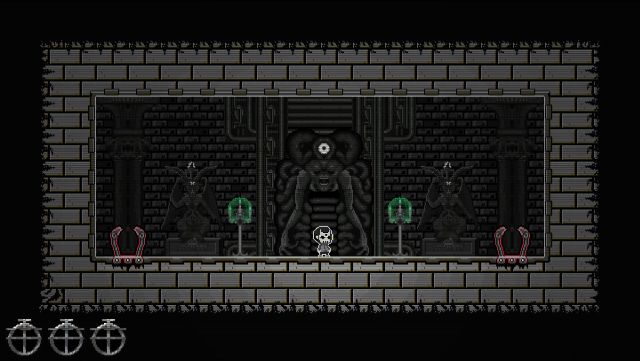 As you can tell, some of the things you face bring visual menace in addition to physical resistance. Some enemies, for instance, explode when you hang around them. And by "some enemies," I mean ghastly things like bloated, deformed bodies and floating, mangled faces that'll give you Berzerk flashbacks. You'll also encounter bosses that range from flayed, disfigured bodies to massive skulls with worm-like flesh protrusions, and even a witch who reveals herself to be a corpse-like demon. I think by now I've hammered home one huge point: Tamashii's art style provides a cavalcade of horrific, grotesque imagery that's equal measures of fascinating and revolting, all designed to make you uneasy.

This quest shouldn't take you long to complete. A focused player could wrap this one up in a single sitting, and yet still come away from the experience fulfilled. Tamashii balances all of its bonkers ideas correctly, creating a challenging puzzle-platformer that's equally creepy and delightful, with both mechanics and art that work well in tandem. If ever I could nominate a game to be the poster child for an "anti-mascot platformer" category, this would be it.

If you enjoyed this Tamashii review, you're encouraged to discuss it with the author and with other members of the site's community. If you don't already have an HonestGamers account, you can sign up for one in a snap. Thank you for reading!

© 1998-2021 HonestGamers
None of the material contained within this site may be reproduced in any conceivable fashion without permission from the author(s) of said material. This site is not sponsored or endorsed by Nintendo, Sega, Sony, Microsoft, or any other such party. Tamashii is a registered trademark of its copyright holder. This site makes no claim to Tamashii, its characters, screenshots, artwork, music, or any intellectual property contained within. Opinions expressed on this site do not necessarily represent the opinion of site staff or sponsors. Staff and freelance reviews are typically written based on time spent with a retail review copy or review key for the game that is provided by its publisher.