Once upon a time in Japan, a platformer was made for Sega's Mega Drive. I'd go into more details, such as its name, but that thing had a fair number of words and I do have issues with motivation at times! Besides, all that's needed to know for this review is that it was brought over to America in 1991 after getting a plethora of things changed and was released on the Genesis under the name Decap Attack.

To start with the positives, this game looks pretty nice with bright and cartoonish graphics. While playing it, I spent a fair amount of time wondering if Decap Attack was based off some really obscure cartoon because the plot and visuals worked together to create the sort of vibe one gets from a barrage of animated shows where one or more do-gooders routinely foil the plots of diabolical, yet still bumbling, masterminds. While that assessment wasn't correct, I was not surprised to read that this game did inspire a comic strip. It just has that feel.

You control a bizarre mummy-like man named Chuck D. Head, who is Frankenstein'd by a mad scientist and his assistant to thwart the world-conquering plans of the demonic Max D. Cap. Mr. D. Cap knows how to make a strong first impression, though, as his first act was to smash the game's skeleton-shaped world into seven pieces and placing each one under the control of either him or an underling. You'll have to go through each of those seven locations -- with each divided into three stages -- until you encounter D. Cap and put an end to his plans.

Chuck's main form of attack is to punch the ever-loving crap out of the assorted bed-sheet ghosts, wolf-men, skeletal fish, birds and other monsters serving as adversaries. At least I think I can call it a punch, even through he's technically using a head embedded into his torso instead of a fist. He can also jump on them, but that attack is a bit less effective. It takes two to three bounces off an enemy to accomplish the same thing as a good smacking does and there are some foes, such as snails with spiky shells, where that is not an advisable strategy. Scattered throughout each level of the game are a number of statues that can be punched for items and one of those will be a huge help, though. 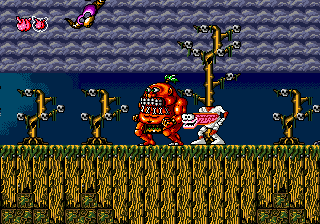 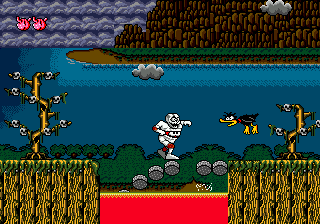 Via statue-whacking, you can acquire a skeleton head that can be thrown like a boomerang, damaging anything that comes into contact with it -- even if the head is laying on the ground and an enemy simply walks into it while strolling. While Chuck does have a life meter, once you've gotten your first skull, you will not want to take a single hit again, as doing so dispels this weapon until you've found another. Not ideal, at least if you're fond of being able to dispatch enemies without constantly putting yourself at risk in the process!

Skulls aren't the only thing Chuck can find in those statues, though. There also are a number of potions that can temporarily enhance his abilities. While I didn't really do much experimenting with them, I can say the one that gives him improved jumping abilities can be pretty useful at times, especially on the occasions the game tosses out a level moving vertically instead of horizontally. In the final level of each world, there also will be an item needed to access the next world after beating the boss. This forces players to put some effort into exploring levels instead of just plotting the quickest path from beginning to end, lest they defeat the boss of the sixth world and get a message saying they need something to move on and then have to backtrack through the damn stage until they've punched the right statue and gotten the damn item! No, I'm not speaking from personal experience -- why do you ask?!?

The thing is, personal experiences are kind of essential when reviewing a game and mine wasn't all that great with Decap Attack. Part of that had to do with mechanics, as Chuck was kind of an awkward hero to control. It seemed like momentum played a big role in things, as I'd often find myself skating into enemies -- and we're talking long before the sixth world and its ice-themed levels where that sort of thing is expected to be an issue. 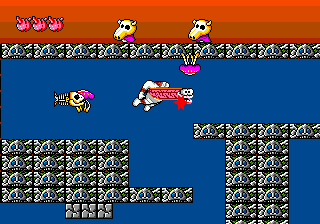 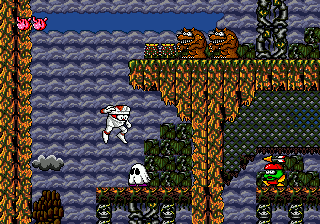 But that isn't the real problem. If I was truly into this game, I'd be willing to work around control issues, possibly to the degree that what seemed awkward would wind up feeling normal. However, this is one generic platformer that just happens to have a cartoonish theme. In comparing the final worlds to the initial ones, the only real differences involve the complexity of the layouts and the background colors and graphics. You'll do the same stuff repeatedly and the feel of what you're doing won't be changing, with only a pair of levels where you're chased by a lethal and indestructible force offering any variety.

Eventually, everything in Decap Attack just sort of blends together in a lengthy exploration of tedium. This level has stretches of underwater exploration, that one relies more on precision jumping and here's one loaded with collapsing platforms over lethal lava. With all of those concepts regularly repeated, only with a higher degree of difficulty as you get closer to D. Cap.

With a few tweaks, this game could have been a pretty entertaining game that matched up to its cartoon-like subject matter. A bit more diversity in the challenges would have led to me not feeling like I was enduring the same handful of stages repeatedly, while improved controls would have made things a bit more enjoyable to play through. It probably didn't help that the first handful of worlds primarily used the same green and brown hues, which only added to the feelings of repetition. At least, later on, different backgrounds were utilized to help provide the illusion of variety, if not the actual thing.

But that's life. Some games push the envelope of what a player expects from their genre, exhibiting lots of creativity and making it a thrill to progress from one section to the next because you'll be eagerly anticipating what comes next. Others, like Decap Attack are happy to adhere to well-traveled roads where things are generally put together with something akin to competence, but there's very little out there capable of eliciting genuine emotion. I played through it, I had some good times -- or at least wasn't miserable -- and now that I've finished this review, I'll likely never think of it again in any way other than, "Oh, that one thing I went through in order to contribute to the site's October reviewing project for once".

If you enjoyed this DecapAttack review, you're encouraged to discuss it with the author and with other members of the site's community. If you don't already have an HonestGamers account, you can sign up for one in a snap. Thank you for reading!

© 1998-2021 HonestGamers
None of the material contained within this site may be reproduced in any conceivable fashion without permission from the author(s) of said material. This site is not sponsored or endorsed by Nintendo, Sega, Sony, Microsoft, or any other such party. DecapAttack is a registered trademark of its copyright holder. This site makes no claim to DecapAttack, its characters, screenshots, artwork, music, or any intellectual property contained within. Opinions expressed on this site do not necessarily represent the opinion of site staff or sponsors. Staff and freelance reviews are typically written based on time spent with a retail review copy or review key for the game that is provided by its publisher.