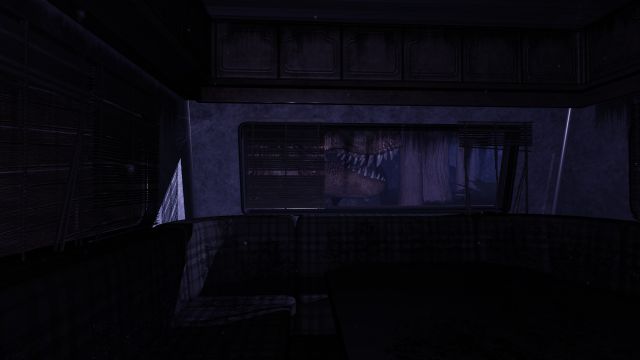 The first-person horror game Oakwood struck me as awfully familiar. "I saw a movie like this as a youngster," I thought to myself. Having read that, you're probably rolling your eyes and saying, "We all watched 'Jurassic Park,' Joe." But that's not the piece I'm referencing. The late '80s saw the release of one of my favorite film anthologies, "Creepshow 2," which featured a simple, effective middle segment called "The Raft." This tale, based on a short story by Stephen King, featured a quartet of party animals who venture out to a serene lake in the middle of nowhere. They all swim to a raft in the middle of the water, only to discover what appears to be an oil slick following them. It isn't long before one of them gets pulled into the water and devoured by the "slick," leaving the rest too petrified to even consider swimming back to shore.

You see, this story demonstrates that horror tales don't need to be complex. Put some average Joes in a desperate situation with something that can cause great harm, and watch them try to wriggle their way out of the predicament, complete with screw-ups and near scrapes with death. Most of all, the story never truly explains the antagonist's origin. It's just there, and that notion alone is creepy as hell. Never mind that the idea of a carnivorous blob dwelling in a lake is implausible, because the lack of explanation and the human fear of the unknown leave even the tiniest trace of doubt in your mind that maybe there could be something horrible out there that defies explanation. That thought alone is enough to make me check the surface of the water every now and then when I'm at the lake, just to make sure there isn't an autonomous mass nearby, waiting to painfully absorb me and my family like an immense amoeba.

Oakwood isn't that much different, really. You take the role of a young woman heading to a camp in the beautiful, dense woods of British Columbia, having been invited by some friends. They tell you the place they're heading to is abandoned, but no matter. Just unlock the gate, let yourself in, and lock up when you're done. However, you can't shake a grim feeling that comes over you as you trot down to the tents, brought on the the thick atmosphere. The lighting in that introductory segment perfectly sets the mood for the rest of the campaign. It's just bright enough that you can make out and lovingly take in the gorgeous (albeit dated in appearance) vegetation and scenery, but dusky enough that you get the impression that a shadow is falling over you while you walk, like an omen. 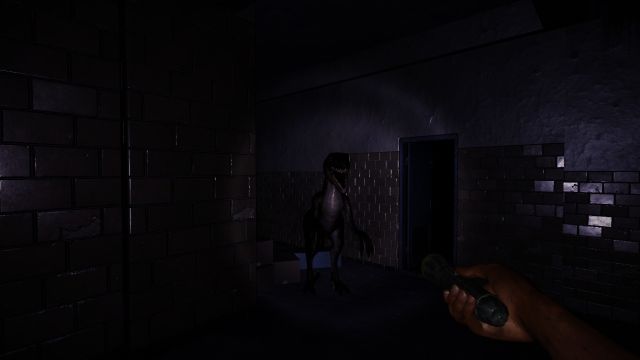 You finally approach the camp, and everyone's gone. While examining a nearby scrawled note, you hear a gut-wrenching scream from emanate from the woods up ahead. And all you think is; "Nope." However, the show must go on, so you venture forth until you come across a camper. You enter and something unseen knocks you out. When you come to, you hear a distant rumble that grows with intensity, apparently getting closer to you until it's literally at your doorstep. You grab a close by flashlight and aim the beam out the window, spotting a huge, reptilian eye glaring hungrily at you. Crouch all you want, but you know the theropod outside is going to knock the camper over, and that you're going to run like hell to the nearest safe place, realizing full well that nowhere is safe...

If you've played almost any first-person fright fare in the last decade, then you know how this one is going to work. During some segments, you sneak through dark rooms and corridors, sometimes crouching and/or shutting off your flashlight so as not to raise suspicion. You see, you're not alone in the shadows here. Famished Velociraptors and Dilophosauruses roam in the pitch black and bushes, just waiting for you to make some noise. When you do, they're quick to pounce on you and unzip your torso or spit burning projectiles on your face.

Oakwood handles this concept effectively by providing you with well thought out situations. You might need to creep past some critters and slip into an air duct, or run like hell until you get to a crawl space that Ol' T. Rex can't access. It might take some experimentation and a few awful scenes where the dinos pounce on you and rip you apart, but repetition and steeled resolve (not to mention the ability to cope with watching your own demise repeatedly) should get the job done. 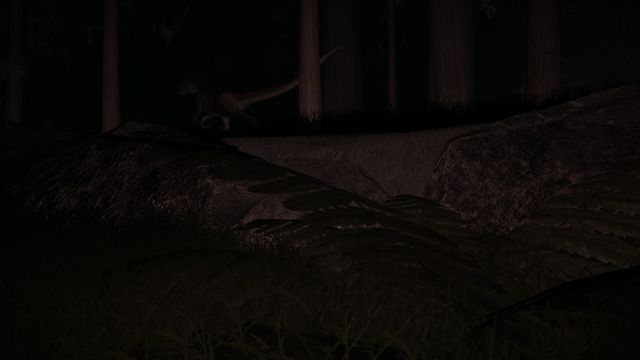 The game knows which routes you're likely to take, and leans into your choices. During segments where you need to run like mad, you can just hear the creatures behind you, closing in, casting doubt on your strategy. "Was running straight for the exit the right move, or should I drop to a crouch and hide in the tall grass?" you ask yourself while numerous beasts quickly approach you from behind, getting closer, closer, closer, closer until you just squeak by and win. Occasionally, though, you discover how dead wrong you were when a toothy maw snaps shut on the camera...

The developers at Breaking Dimensions understand timing very well. There are moments where you mosey about, only to hear a bang somewhere nearby at just the right second to give you a heart attack. You hear swishes in the grass, heavy footfalls on the floor, and snorts around corners that give you pause, leaving you with a thudding in your chest while you hope very much that whatever's coming doesn't sniff you out. And yet, the game gives you plenty of room for error, where you can breeze through stealth segments without feeling cheated. Hell, during one section featuring a Dilophosaurus, you can easily de-aggro the monster by running into a small room and ducking behind a corner. 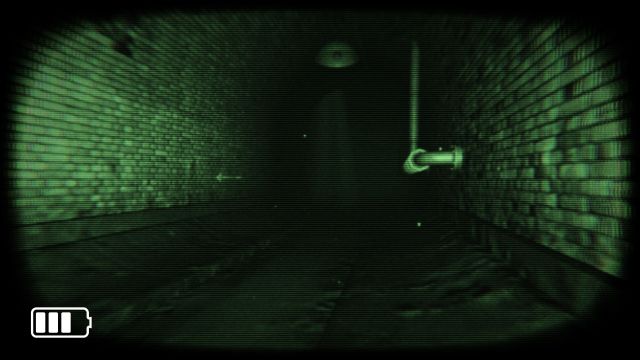 Sometimes, though, you find the experience leaving you without much guidance. This doesn't occur often, mind, but one instance at very least sticks in my craw. At one point, you pad down a path only to hear the thunderous footsteps again. A message on the screen tells you to hold perfectly still, and that's when the T. Rex reappears. It's a good thing I remained motionless, because my stillness made it so much easier for the king to rush right over and finish me with a single chomp. It took me a few attempts to figure out how to survive this segment, but I did eventually make it, no thanks to the useless messages...

That scene lay just before the finish line, which I crossed in short order. After watching the ending, I collapsed in my seat and tried to let my heart slow down. If the game ever detailed why the dinosaurs were there, then I missed it (though I did read the note at the very end), and that's just as well. The combination of not knowing the hows and whys paired with the intense campaign means this title is going to stick with me. Next time I go camping or hike a trail or voyage into one of the many forests here in the Pacific Northwest, I'm now going to check the woods for anything that looks even vaguely reptilian, just like I ridiculously scan the surface of the water for killer oil slicks. I know this is all nonsense, but that trace of doubt is there, and all it took was a simple premise to put it in place: "What if some people go to an abandoned summer camp and get munched by dinosaurs?" Classic.

If you enjoyed this Oakwood review, you're encouraged to discuss it with the author and with other members of the site's community. If you don't already have an HonestGamers account, you can sign up for one in a snap. Thank you for reading!

© 1998-2021 HonestGamers
None of the material contained within this site may be reproduced in any conceivable fashion without permission from the author(s) of said material. This site is not sponsored or endorsed by Nintendo, Sega, Sony, Microsoft, or any other such party. Oakwood is a registered trademark of its copyright holder. This site makes no claim to Oakwood, its characters, screenshots, artwork, music, or any intellectual property contained within. Opinions expressed on this site do not necessarily represent the opinion of site staff or sponsors. Staff and freelance reviews are typically written based on time spent with a retail review copy or review key for the game that is provided by its publisher.