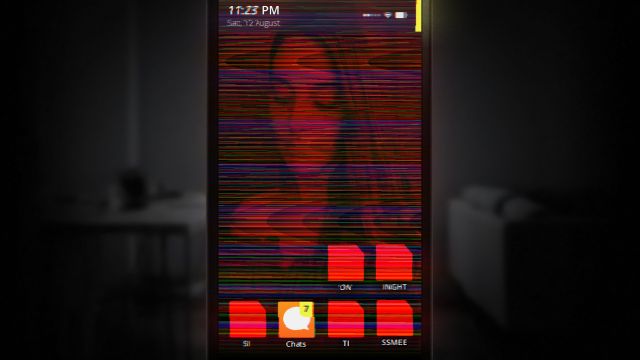 You wake up one morning and find a random smartphone on your doorstep. You bring it inside to find out who might be the owner, snooping through a few apps or bits of media to accomplish this end. Before long you come across a video of the device's apparent user, Anna, clearly distressed and most likely in danger. "Don't come find me," she says, outlining a horrifying implication: that the nightmarish predicament she's currently in is nowhere near as awful as what could happen if she's recovered. Someone or something has her, and confronting them could unleash an even greater evil...

That's SIMULACRA's hook, hitting you with a creepy situation that sparks a handful of questions that you feel compelled to answer. It turns you into an amateur sleuth who must rifle through a lost girl's phone for answers regarding her whereabouts, while maintaining lines of communication with a handful of people. This isn't your standard horror game where you search an old house in a first-person perspective or use tank controls to maneuver around zombies or hellspawn. Rather, the interface imitates a smartphone, and you pore over numerous text messages, pictures, emails, and social media posts looking for answers or leads.

You aren't alone in this endeavor. Anna's ex-boyfriend Greg contacts you almost immediately, giving you both guidance and attitude. His suggestions lead you to a dating app where you meet Taylor, a young dude Anna has apparently been chatting up. Taylor represents a solid foil to Greg's hot-headed demeanor, as he's more lighthearted and goofy. The guy never passes up an opportunity to tell a groan-worthy joke, even when at terribly inappropriate times. 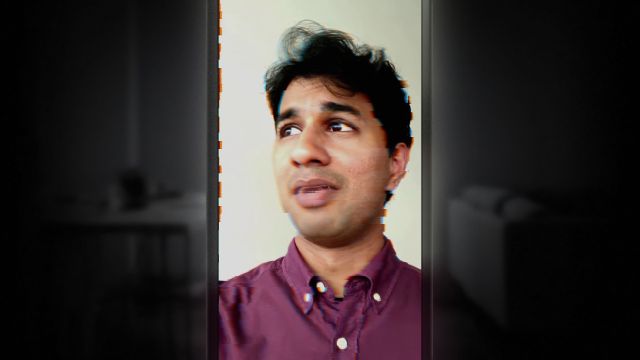 Over time, you dig up a lot of info on these guys, plus surmise a thing or two about their personalities through their interactions. You come to find out why Greg is an ex and not a current beau, and that he's a bit of a douchebag with a temper. Still, you're compelled to remain on his good side because he can help lead you to Anna. On the flip side, Taylor seems mild-mannered, but hasn't exactly told you (or Anna) everything about his past. He often leaves you wondering if he's keeping other secrets...

While these two characters add generously to the experience, they also represent one of this title's downfalls: jarring tone. You see, this simulation piece uses a lot live action FMVs and audio recordings, and you often hear the voices of various contacts throughout the campaign. Greg's voice crops up often, and usually comes off a bit cartoony. Remember, this is a dark work of tech horror where one of the central characters is in a jam so terribly that she'd rather disappear than survive. Taylor's acting, on the other hand, isn't half bad. His character's lines often offer a bit of comedic respite from the "Black Mirror"-esque narrative, but they sometimes cross the line and render some segments difficult to take seriously.

Nonetheless, both supporting roles serve vital parts in this tale by filling you in with a lot of Anna's backstory while also guiding you to your next set of tasks. Quite often, they suggest checking a certain part of the mobile or trying to get in touch with a particular person to pick up some clues. At one point, Greg thinks you might something on one of Anna's social media accounts, and has you log in to read the feed. The only trouble is she's logged out, and you don't know the password. The obvious next step is selecting "forgot password," which sends a reactivation key to her email.

...which requires a PIN that's apparently her cat's birthday. 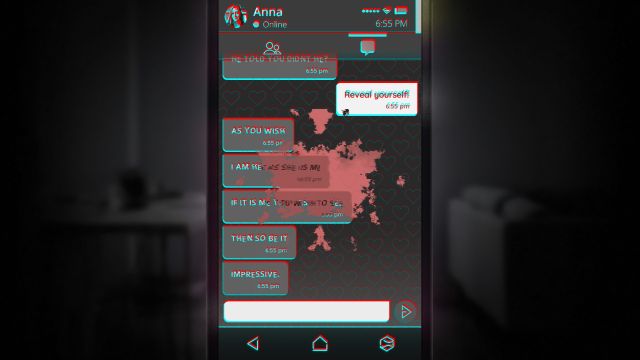 The game doesn't blatantly shove your face in the answers to its puzzles. You can hit Greg or Taylor up for hints, but they don't always outright offer up the solutions. That's when you make use of various other parts of Anna's cell. For instance, if you to find out someone's last name for a security question, you can easily find it in the address book. Or maybe you want to contact a certain man's employer to get some dirt on him, but don't know where to start. Checking Anna's old conversations with him on the dating app reveals a link to his company's website, where you can apply for a position. You can also pick up some good intel by seeking out corrupted images and text messages and "fixing" them. Clicking on them takes you to simple puzzles, where you either try to piece together a complete image or restructure a broken sentence. Completing those mini-games unlocks items for future viewing and use.

Most of these puzzles lead to conversations with other one-shot characters, allowing you to question them and piece together what went down. However, as you progress in your investigation, things slowly get eerie. Lights flicker, disembodied voices sometimes whisper, and occasionally pictures glitch out in the most terrifying ways. Anna's face might shift for a split second in to a corrupted image, creating the impression that her eyes have been gouged out and that she's screaming in agony. On top of that, a strange entity known only as Aulner will contact you from time to time and give you some muddy hints regarding the girl's location.

Through your correspondences, you eventually cross the finish line and receive one of four different endings. Here's the thing: you have no way of even guessing which one is even a decent conclusion. You align yourself with one person, and that automatically gets you the bad ending. You blow your cover with one character who isn't even directly related with the ending, and suddenly you're disqualified from receiving the best ending. Even if you maintain secrecy, you still need to say just the right things to the correct people to land the top finish, plus complete a task that you would never have even try without reading a guide. 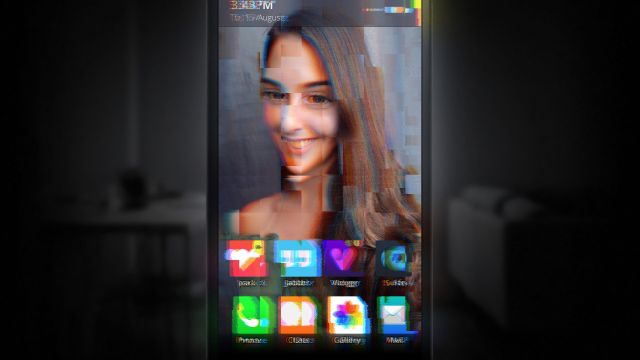 The good news is if you screw up and get a crap finale, you unlock "BEGIN+." This feature loads messages more quickly and allows you to speed through the campaign. So as long as you know what to do, you should be able to see all of four of those outcomes in no time.

SIMULACRA pretty much ends when it should, right as its concept runs out of steam. Regardless of how things turn out, the experience leaves you grim implications that'll stick with you for some time after the credits finish rolling. Despite the game's few shortcomings, this is a solid cautionary tale on navigating the web carelessly, with plenty of commentary revolving around the way we present ourselves online. This adventure may have its kinks, but it's still got plenty of bite.

If you enjoyed this SIMULACRA review, you're encouraged to discuss it with the author and with other members of the site's community. If you don't already have an HonestGamers account, you can sign up for one in a snap. Thank you for reading!

© 1998 - 2022 HonestGamers
None of the material contained within this site may be reproduced in any conceivable fashion without permission from the author(s) of said material. This site is not sponsored or endorsed by Nintendo, Sega, Sony, Microsoft, or any other such party. SIMULACRA is a registered trademark of its copyright holder. This site makes no claim to SIMULACRA, its characters, screenshots, artwork, music, or any intellectual property contained within. Opinions expressed on this site do not necessarily represent the opinion of site staff or sponsors. Staff and freelance reviews are typically written based on time spent with a retail review copy or review key for the game that is provided by its publisher.