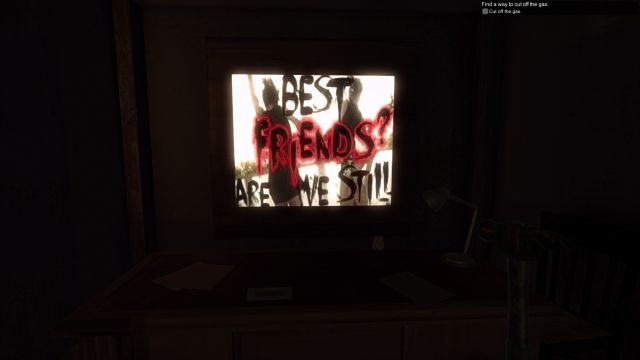 There's only one scene in You Deserve that truly cranks up the scare factor. Late in the proceedings, you explore a dark maze in the hopes of securing a special item. After rounding a corner, you hear a demonic voice chanting nearby. As it turns out, the ungodly racket emanates from an underground tunnel positioned at the bottom of some ominous stairs. You know you're going to reluctantly descend the stairway and enter the godforsaken place because that's how horror games roll. As soon as you reach the final step, a feminine voice calls out: "I'm right behind you." Your only option is to run forward without looking back, knowing that a "game over" screen will greet you if hesitate. The tunnel itself offers no reprieve, either. It's a straight shot with nowhere to hide, designed to instill in you the fear that simply pressing onward may not be enough to save you. Your sole hope lies in the door at the end of the passageway, assuming it's enough to keep the tormented spirit pursuing you at bay...

Sadly, to get to this one killer segment, you have to wade through a whole lot of nonsense...

And by "nonsense," I mean "your average first-person horror fare, except slightly more tedious." Thankfully, you aren't going to find yourself confined to a house with a lot of poorly translated English or blatantly flipped assets. Instead, you're trapped in a nightmarish alternate reality concocted by a vengeful spirit. However, the ghost doesn't seem to have it in for you too badly. Rather than imprison you in some maddening hellscape, she dropped you into a mundane world full of locked doors and hidden keys. Seriously, you open up this experience by unlocking two doors, at least one of which requires a key hidden in a drawer nearby. Not long after that, you stumble upon another locked pathway, with an out-of-sight key lingering somewhere.

And after that? Another locked door, another key.

Hell, at one point you enter a small house that's crucial to the plot, where nearly half of the doors you walk through beg for an item of some kind, be it a key or a claw hammer. Yes, you even need an tool just to leave the place at the end of the stage. Never mind that this level comes with a horrible glitch that might prevent you from completing the storyline objectives, because the monotonous and unfrightening fetch quests effectively rob this ghost story of its bite. 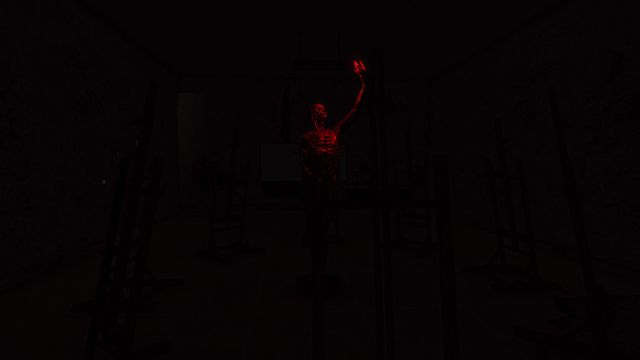 Meanwhile, the game seeks to jolt you with the occasional jump scare via randomly appearing imagery (mostly the game's antagonist popping up harmlessly) or by hitting you with "run away from the monster" sections. At best, these moments come across as "better than nothing," but they seldom feel natural or fresh. For the most part, you can evade the villain by simply running forward. Other times, she only pops up to startle you, but causes no actual harm otherwise.

It's strange to see such flaccid scares in a title like this, because so many other factors are actually on point. For one thing, the game harks back to "A Nightmare on Elm Street" with its premise and stage designs. The way your foe stalks you in a dream-like world that's eerily similar to Freddy's boiler room realm appeals to any old school horror geek's sense of nostalgia. The first stage has that "creepy basement" vibe, seguing into an abandoned school with a lot of thematic messages scrawled on the walls.

Normally, wall writings constitute a tired cliche, but Deserve makes them work because of its central them: school bullying. The horrid messages and graffiti smack very much of the kind of torment kids go through on a regular basis, with cruel teens writing awful things on stall doors about one of their peers. It's not atypical for the horror genre to touch on sensitive or poignant topics, and the developers obviously knew that when crafting this one. 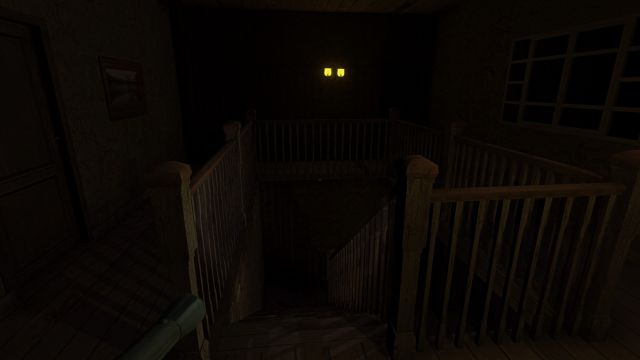 At the same time, the plot isn't fully formed. For the most part, it moves forward via randomly placed notes and psych evaluations, relying on yet another worn out concept, albeit one that doesn't work as effectively as the previous discussed example. You find out about a group of kids bullying a girl, who predictably slips into depression. However, you feel like you only get the bare bones of the backstory, and the game leaves you wanting more. Really, that's Deserve's biggest downfall: that there were hints of greater depth present throughout the campaign, but you never really get to dive in.

Case in point: the protagonist actually speaks as you advance, unlike your standard first-person horror lead. While that might not sound like a big deal, just her voice alone added personality to a typically one-dimensional role. However, she only chimes in to give unnecessary commentary: "What was that?" "What's going on?" "I remember this place." More than anything, her voice represents a missed opportunity, where she could have spoken more substantial lines that offer more depth to the tale or herself.

All of this content culminates in a final stage where you have to search a wide open park for some event items--including two keys to open a locked gate--that boils down to luck. Since you don't receive a map, your only strategy is to wander the grounds aimlessly until you happen upon a portion of the premises that might hold one of the needed objects. Here's the catch: the antagonist also randomly stalks the terrain, and she'll give you the chase of your life if you stumble upon her. The hell of it is sometimes she basically pops up right next to you without warning and claws you to death before you can even start running. 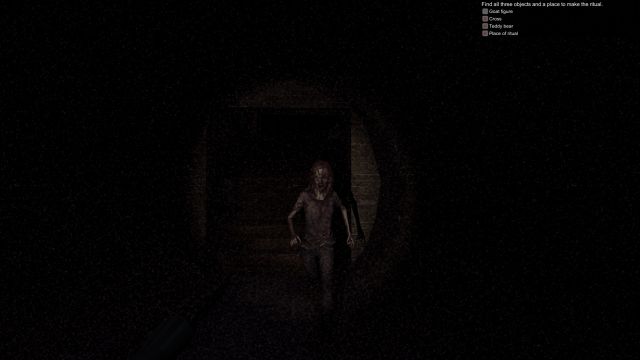 To make matters worse, one of the items and both of the keys lie in the depths of a maze where you have almost nowhere to run if you're spotted. And you will be spotted just about constantly. Your only hope is to locate an item and drag it back to a checkpoint before getting killed. If you're lucky, the monster might miss you during a run, and you'll be able to save your progress unscathed.

Ultimately, I appreciate You Deserve as a horror fan, but I can't give it a firm recommendation--or even a flimsy one. It's an average title at best, even though it definitely hits more high notes than a vast portion of Steam's scary offerings. Sadly, what little great material this title has to offer only serves to remind you that it doesn't have nearly enough flesh on its bones, and what you're playing is the near-skeleton of what could've been a great, downbeat adventure.

If you enjoyed this You Deserve review, you're encouraged to discuss it with the author and with other members of the site's community. If you don't already have an HonestGamers account, you can sign up for one in a snap. Thank you for reading!

© 1998-2021 HonestGamers
None of the material contained within this site may be reproduced in any conceivable fashion without permission from the author(s) of said material. This site is not sponsored or endorsed by Nintendo, Sega, Sony, Microsoft, or any other such party. You Deserve is a registered trademark of its copyright holder. This site makes no claim to You Deserve, its characters, screenshots, artwork, music, or any intellectual property contained within. Opinions expressed on this site do not necessarily represent the opinion of site staff or sponsors. Staff and freelance reviews are typically written based on time spent with a retail review copy or review key for the game that is provided by its publisher.