When I first rented Darius Twin in my early teens, I knew I had found something special. I had tried other horizontal shooters by that point, but they simply didn't appeal to me. Those other titles presented a version of space mostly devoid of anything interesting, except perhaps for huge battleships at the end of a stage that had a way of reliably kicking my butt. I felt like I was surviving the time I spent with those games, rather than enjoying it.

Darius Twin felt immediately different. In the first stage, I soared over crystal blue lakes and blasted angelfish out of the sky. When I reached the boss, it resembled a giant fish and I had powered up enough by the time I hit that encounter that I thought maybe I stood a chance. Of course I was wrong and got to watch my ship go down in flames, but the brief moment of false confidence felt pretty good. I played some more, and then some more, and then some more. I wound up buying the game and eventually playing through it from start to finish. Taito really had its hooks in me.

Since then, my experience with the Darius games has tended toward lukewarm. For whatever reason, Taito has struggled to reproduce that special combination of elements that made Darius Twin my favorite horizontal shooter. Yet still I kept playing new entries in the series as I came across them, which brings me to Dariusburst: Another Chronicle EX+ on Nintendo Switch. Developed by Pyramid, it is the biggest installment yet in the long-running series. But is it the best? Not in my opinion, it's not. I do quite like it, however! 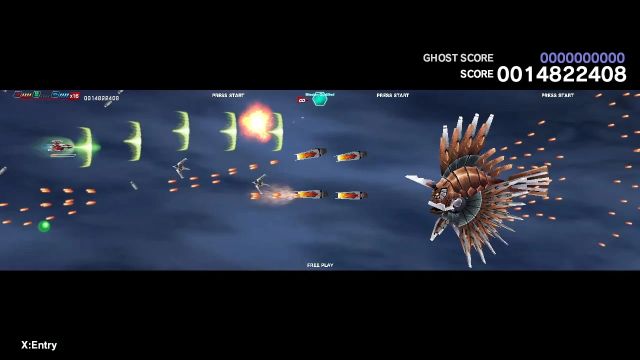 Dariusburst: Another Chronicle EX+ presents what often feels like a more generic version of the Darius concept, which is my main reason for continuing to prefer Darius Twin. The familiar bosses make an appearance, still shaped like over-sized denizens of the sea. Here they pack heavier firepower and more distinct phases of attack, but somehow they impress me less. Perhaps the color scheme has something to do with it. The vibrant hues that made environments and battleships stand out so much in Darius Twin are gone, replaced by more subdued tones that wouldn't feel especially out of place in any other series.

The stages that lead to confrontations with the nearest boss ship fare even worse, in some ways. It's not uncommon to see a backdrop consisting of nothing but the vast expanse of space, or perhaps vague outlines of a more interesting environment you don't get to actually witness firsthand. Maybe you'll see some swirling color waves. It's all a far cry from the more memorable Darius Twin days, but avoids being dull thanks to one very important reason: scale.

Somehow, I don't think I've ever played a horizontal shooter where I felt quite so involved in a large-scale dogfight in space. As your ship glides from left to right, you'll sometimes have to dodge between huge bits of space junk. More often, you'll watch entire enemy squadrons fly onto the screen in formation, like locusts descending on a bowl of fresh popcorn. The screen is alive with activity much of the time, providing a genuine thrill that feels truly epic thanks to the wide display. I love playing on my 4K television. The soundtrack, which eschews the typical rock vibe for something closer to classical music, lends everything a somber tone that amplifies rather than diminishing the impact. I do genuinely miss the lack of interesting environments, and yet those black expanses might be my favorite part of the game. 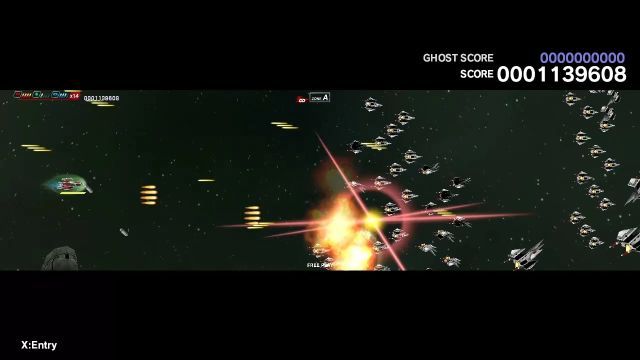 Players get to choose from a variety of ships, across the game's numerous modes. The vessels don't look different enough from one another to keep my interest, really, but they are easy to recognize as variations on the Silver-Hawk fans know and love.

As usual, players get to power up their ship as they blast their way through the various stages. A string of asteroids might feature one that sports a red, blue or green hue. Picking up the trinkets they drop increases firepower. This is a welcome development, of course, but the game doesn't take it far enough because none of the available modes require you to clear more than a few stages at a time before you're done with your entire run. I miss a more robust campaign, where you could map an extended route in the old Outrun style and have a wildly different experience. I miss powering up my ship's little pea shooter until it cut an enormous swath through enemy resistance. But here, the developers found an interesting alternative approach.

Instead of focusing entirely on which main weapon, peripheral shot and shield you want to equip, you'll use the "burst beam" to leave the inky expanse littered with ruined ships and shrapnel. Defeating a few enemies charges up a shot, which you can then deploy as a super powerful beam that tears through weaker ships and does tremendous damage even to boss cruisers. That blast is useful for precision attacks, or you can deploy a clone ship that fires it for a set period of time in the direction you aim. If enough ships and debris cross the beam's path, it persists long after it otherwise might. Careful deployment protects you from some enemy blasts and clears a path through various hazards. 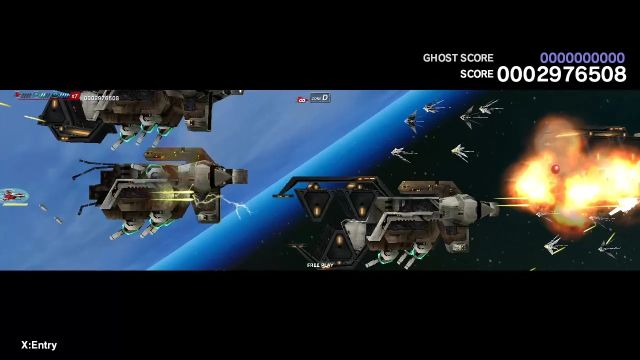 Thanks to the burst beam, the process of playing Dariusburst: Another Chronicle EX+ feels considerably more strategic. I remember when I rented Darius Twin the first time, my sister watched me play for a bit and then said, "That looks boring, because all you're doing is shooting and moving around." She had summed up my activities pretty well, even though I was having a lot more fun than she thought I should. But I also have fun here, with a much less twitchy approach that rewards experimentation and encourages mastery of a different sort.

Dariusburst: Another Chronicle EX+ is the most feature-rich version to date of a Darius offshoot that made its debut on PSP in 2009 in Japan. Pyramid has worked hard in the years that followed to add more ways to play, thanks to additional stages, ships and more. The team's labor means right now is the perfect time to jump into the franchise again to see how it has evolved since you might previously have encountered it. I still prefer the simple charm of Darius Twin, but I recognize that the developers have put together an alternative that is fresh and exciting. There is room in my heart for both approaches. Is there room in yours?

If you enjoyed this Dariusburst: Another Chronicle EX+ review, you're encouraged to discuss it with the author and with other members of the site's community. If you don't already have an HonestGamers account, you can sign up for one in a snap. Thank you for reading!

© 1998-2021 HonestGamers
None of the material contained within this site may be reproduced in any conceivable fashion without permission from the author(s) of said material. This site is not sponsored or endorsed by Nintendo, Sega, Sony, Microsoft, or any other such party. Dariusburst: Another Chronicle EX+ is a registered trademark of its copyright holder. This site makes no claim to Dariusburst: Another Chronicle EX+, its characters, screenshots, artwork, music, or any intellectual property contained within. Opinions expressed on this site do not necessarily represent the opinion of site staff or sponsors. Staff and freelance reviews are typically written based on time spent with a retail review copy or review key for the game that is provided by its publisher.