In more recent times, it's become common for games to be released with several different difficulty settings, with one typically having a name like "Casual" for people who might be interested in the story, but don't particularly care to get involved with such things as devising strategies for tough battles or having to actually work towards reaching the end credits.

"To each their own," I say to that. Artificially diluting the difficulty to a level where all I have to do is mindlessly tap buttons while only paying half-attention to the proceedings really isn't my thing. However, after playing Dragon Age II, I might have to reassess my opinion. Taken solely on the merits of plot and story-telling, Bioware's sequel to Dragon Age Origins is something that's really special. But as a piece of interactive entertainment where I have my hands wrapped around a controller and am engaging in battles, it's dull, dumbed-down and repetitive to the degree that I would have had more fun on Casual, simply bullying through everything without needing to pay much attention to what I was doing.

If you played Origins, do you remember Lothering? It's the grubby little village you visit immediately after the events of the game's prologue chapter in order to gain a couple new party members and do a few low-level quests. And then you'll leave to visit actual important locations, only to find that place got smashed by the Darkspawn horde so thoroughly it's no longer available to be visited.

Your hero in Dragon Age II is a man or woman by the last name of Hawke, who can be a fighter, rogue or mage, depending on your preference. At the beginning of the game, he and his family -- composed of his mother and siblings Bethany and Carver -- are fleeing Lothering just in front of the Darkspawn. Unfortunately, they probably should have started their escape plans a bit earlier, as they're besieged by monsters throughout the entire prologue, with one encounter leading to the death of one of the siblings. Funnily enough, the one who perishes is determined solely by YOU, as your choice of character class decides who is expendable. When I think about it, this basically foreshadows almost everything that winds up happening throughout the game. 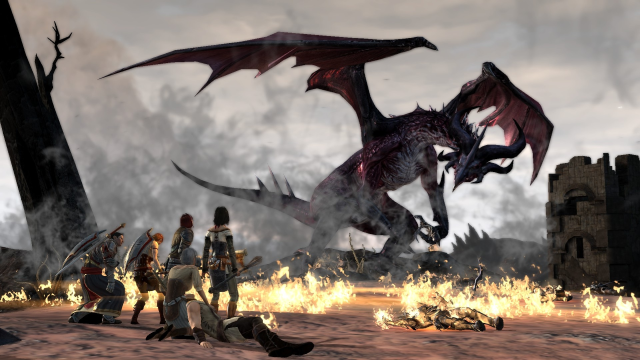 Anyway, the surviving members of the expedition wind up at the city of Kirkwall, which is overflowing with refugees due to how separated it is from the Darkspawn invasion. While Hawke's mother is from a noble family, they can't take advantage of that status because she hasn't been there in ages and her less-than-reliable brother managed to squander their title. In order to get his family past the gates, Hawke enlists as a mercenary, cueing the game's first time-skip.

We come back a ways later to see the family living in the unreliable brother's house, looking for a way to move up in the world. This comes from a pair of dwarf brothers. While Bartrand is a cranky sort unwilling to accept Hawke's help, his far more affable sibling Varric looks at things differently. Taking an immediate liking to Hawke, he offers to help him find work to obtain enough cash to sponsor Bartrand's proposed expedition to the Deep Roads.

If you played Origins, you know the Deep Roads are a bad place, littered with Darkspawn, monsters and bizarre artifacts. And all of that stuff plays a role here! Bartrand findssomething and immediately betrays your party, trapping you in that underground labyrinth. While you are able to escape that predicament -- and do so with enough treasure to reclaim your family's status -- Bartrand's artifact is the sort of thing you just have a feeling will wind up playing a role in things to come.

But there are more pressing concerns. Kirkwall is a city littered with all sorts of problems, large and small. And now that Hawke is nobility and has a reputation for getting stuff done, you'll quickly find that a lot of people are of the opinion you're the right person to help solve, or at least alleviate, those problems. Some of those people are your party members. Grumpy escaped slave Fenris discovers that his old master really wants him back. Elven mage Merrill is desperately attempting to repair an ancient artifact regardless of how negatively her tribe views those efforts. Anders, your old mage pal from the Awakening expansion to Origins has returned -- now bonded with that DLC's spirit of Justice and with a very strong interest in fighting for mages' rights.

Coincidentally, mages' rights are one of Kirkwall's biggest issues, as the Templars who watch them to ensure they don't get seduced by demons or turn to forbidden blood magic are more dictators than guardians, eager to invoke draconian punishments for virtually any infraction. And then there are the Qunari. A ways back, a fleet of them sailed into Kirkwall's harbor and set up camp in the docks. All you know is that they are looking for something that was stolen from them and are convinced they're in the right place. Oh, and that their leader gets more fed up by the day with the general chaos saturating the city and when a Qunari leader gets really miffed about something, that usually leads to brutal military action. Have fun, Hawke! 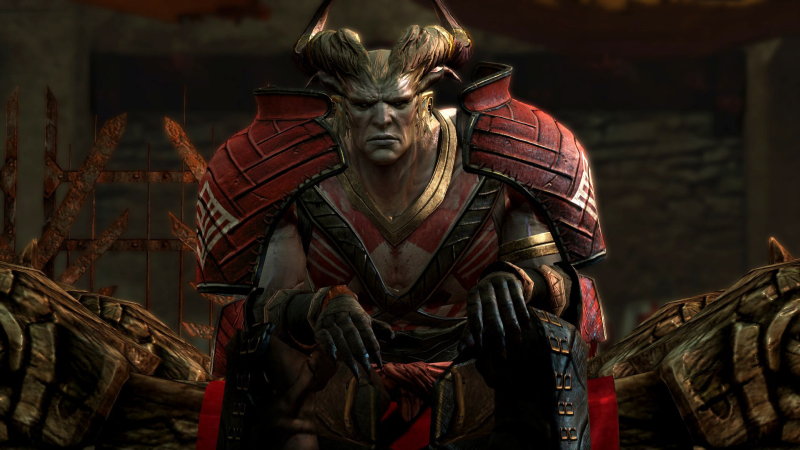 At least, "have fun" is what I wish I could say. For me, Origins was this really awesome console-based western RPG. It was a lot like Bioware's earlier Baldur's Gate games, but simplified to be more accessible for those of us who don't have AD&D dungeon master know-how. Dragon Age II isn't simplified, it's simply dumbed down. My Hawke was a fighter. Because of this, my role in battle was simple. I'd run up to an enemy and tap the attack button repeatedly. I'd tend to have a couple skills mapped to other buttons and I'd use those whenever they were available before going back to the basic attack while waiting for the skills to activate again. Other than that, well, if Anders was a bit slow on the draw providing healing, I might chug a potion to restore life. Now, repeat those last three sentences constantly for, I don't know, 50 hours or so.

While you're doing this repetitive battling, you'll find yourself in a variety of locations, ranging from coastal paths to mountains to caves to subterranean ruins to back alleys and decrepit buildings. And after a few hours, you'll be sick of all those places because the game uses copy-and-paste environments where the main difference between one set of ruins and the next is simply what doors can be opened and which ones are apparently just decoration this time. You'll get all these quests that have interesting stories to them where you'll be pondering your responses and actions and you'll be excited to see where things goand then you'll get sent out to do a handful of repetitive fights in a small dungeon looking just like a few others you'd previously explored.

But that's this game in a nutshell. A role-playing game with a great concept that's marred by all sorts of gameplay issues. Some of which aren't actually tied to the lazy combat or dungeon design. Battle difficulty is all over the place to the degree that when I was doing the game's final quest, I had far more trouble with a battle featuring an anonymous Blood Mage, an anonymous demon and a horde of anonymous Shades than I did with either of the main boss fights, which were more tedious than difficult.

There should have been a lot to like about Dragon Age II. I loved the more intimate setting of Kirkwall and how the plot gradually came to revolve around Hawke and his increasingly-desperate attempts to prevent all these combustible elements from exploding. I loved the character interactions and the NPCs and how one seemingly insignificant act or quest could balloon into something very significant a few hours down the road. If only there was a fun game built around all that good stuff. I'm not the most difficult person to please, but if you're going to suck me into a game's story, you really need to add something to the mix other than simplistic, repetitive battles taking place in generic copy-pasted dungeons. Unless the goal was to get serious life-long gamers like me to suddenly start advocating for Casual Mode, simply so one can enjoy the story without having to expend mental energy focusing on the rest.

If you enjoyed this Dragon Age II review, you're encouraged to discuss it with the author and with other members of the site's community. If you don't already have an HonestGamers account, you can sign up for one in a snap. Thank you for reading!

© 1998-2021 HonestGamers
None of the material contained within this site may be reproduced in any conceivable fashion without permission from the author(s) of said material. This site is not sponsored or endorsed by Nintendo, Sega, Sony, Microsoft, or any other such party. Dragon Age II is a registered trademark of its copyright holder. This site makes no claim to Dragon Age II, its characters, screenshots, artwork, music, or any intellectual property contained within. Opinions expressed on this site do not necessarily represent the opinion of site staff or sponsors. Staff and freelance reviews are typically written based on time spent with a retail review copy or review key for the game that is provided by its publisher.