Since I am in my early 40s at this stage in my life, I can't point to many video games that were created before I was born, and certainly not to a lot of them that today's gamers recall fondly (or at all). Space Invaders, the classic shooter from Taito, is one exception. The first installment reached arcades in 1978, in both color and black and white editions. Its follow-up released in 1979, the year of my birth.

Space Invaders Invincible Collection, a compilation of past Space Invaders titles of note, retails for $59.99 MSRP at launch and includes an impressive 11 selections. But there are some caveats, including the fact that Arkanoid vs. Space Invaders is an "additional download" that still doesn't seem to be available, even though the game is now active on the eShop. I keep checking back and there's no sign of it. Until something changes, 11 becomes 10. And if you don't consider color and black and white versions of the same game to be all that different, 10 becomes 9. 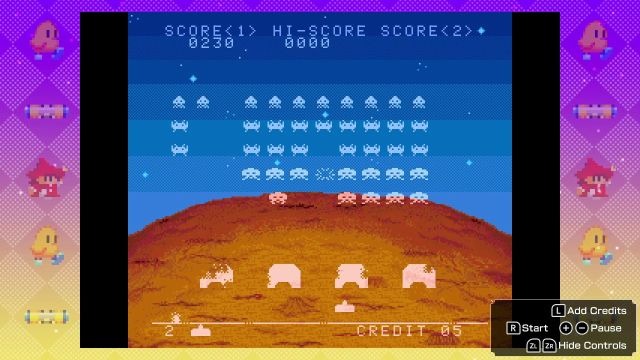 What is Space Invaders, though? Put simply, it is a game where you move a ship back and forth, blasting invading aliens. It seems simple to a fault in 2021, more than 40 years after its debut, but there was a time when this sort of thing was very remarkable indeed. A lot of great games we enjoy today might not exist without Taito's early efforts and the phenomenal success that resulted. It was arguably as important as Super Mario Bros. and Tetris and Minecraft and Diablo and, well, any number of games that shook up the industry in a huge way.

But how fun is Space Invaders to play today? How worthwhile is a collection of 11 such games, once they are all available in one place? Your answer to those questions will rely heavily on how many memories you have of the original games. And since the assortment available here covers releases from over the decades, there's a decent chance you've played one or more of them.

First up are Space Invaders in black and white and in color, as I've mentioned. The difference between the two isn't substantial, though I do like seeing the "rainbow" of tones that give a slight indication how much progress the invading aliens are making. 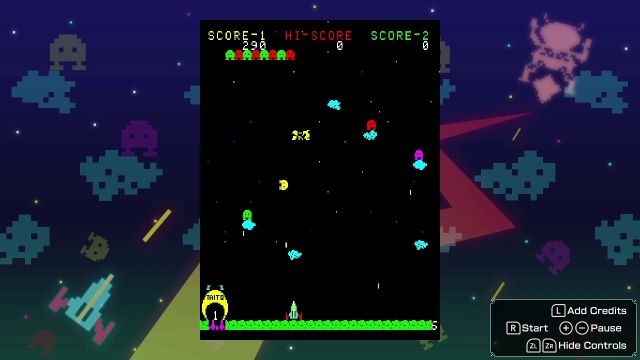 Space Invaders Part II is barely different enough from the previous installment(s) to warrant mention. If someone glanced at the screen and wasn't intimately familiar, I'm not sure they'd be able to point to a difference, though of course there are minor tweaks and improvements such as enemies that split apart. At the time, the introduction of leaderboards--new to Japanese games at the time--would also have been big news.

Next up you have Lunar Rescue and Space Cyclone, which I never would have thought of as Space Invaders games at all. They were both made using the same circuit board as their predecessors, which an audience freshly introduced today probably has little reason to care about. Lunar Rescue is interesting because players have to descend through a field of moving aliens to land on islands and rescue astronauts, then blast their way back to safety. It definitely feels distinct. So does Space Cyclone, which had never been ported to a home console before this compilation. It introduces a lot more dynamic enemies that force players to develop strategies beyond "don't let a falling bullet hit you."

From there, the titles on offer get more interesting, even if they do start to feel a bit dated. Majestic Twelve: The Space Invaders Part IV and Super Space Invaders '91 are essentially the same game, with (from what I can tell) minor modifications to suit their Japanese and American markets. They arrived in 1991, as one title suggests, and their core gameplay was quite a bit more ambitious. You can select and advance through various zones, with unique enemy formations and special weapons. There are even shields that drop so you can withstand a single hit without bursting into bits. However, other games of the time were doing similar things more memorably, so the impact is diminished. 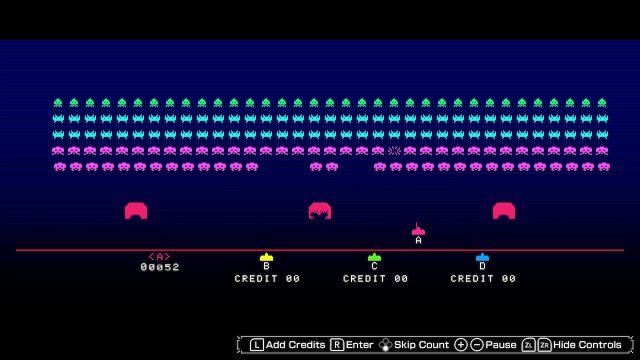 Space Invaders DX, released in 1994, feels like a slight regression, but it takes back some of the familiar personality for which the franchise was known up to that point. There is even a "parody" mode that introduces characters from other Taito properties, including most notably the kiwi that appeared in New Zealand Story (sometimes known in the US as Kiwi Kraze). There is also a competitive multiplayer mode, which arcade operators and players alike must have found very cool for different reasons.

Then, happily, there is Space Invaders Extreme, which I remember loving on PSP and DS. Those editions celebrated the 30th anniversary of the franchise, while the one on offer in this particular bundle is the Steam edition that celebrated the 40th. It feels like a proper game, with distinct stages and challenges and power-ups. Players can snag various limited-time enhancements to fire devastating laser beams or spread shots, and they'll deal with powerful bosses while chasing high scores. It's still quite satisfying, and the single title on offer that does the most (in my opinion) to start justifying the compilation's MSRP.

Finally, at least for now, there is Space Invaders Gigamax 4 SE, originally released in 2018. It looks a lot like the classic, but with a much wider display that allows as many as four players to blast aliens simultaneously, working as a team to eliminate a whole host of monsters. There are some neat surprises, such as aliens that merge into one another and much larger craft that drop toward the player's level while absorbing tons of bullets. I wasn't able to play it with chums, but I can imagine having a lot of fun that way for at least a while. 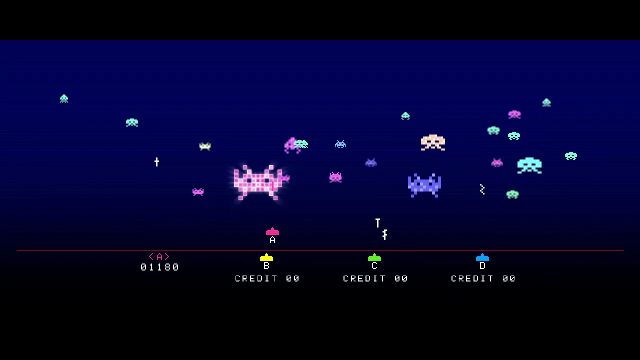 One final note worth mentioning is the selection of the extras, which frankly doesn't amount to much. On the menu, the games are listed on the left side and you can scroll through them to make your selection. To the right, you'll see a demo of the highlighted game in action, and there's a quick bit of trivia along with details about your current high score. When you play, you can choose to go with the standard rules, or try a "challenge" mode that presents a slightly modified objective and gives you only a single ship to put together the very best score you can while chasing said objective. It doesn't feel transformative; it's merely one more way to challenge yourself. Not that there's anything wrong with that!

If you have always loved Space Invaders and you would like to have a collection of some of the best entries in the franchise that you can take with you on the go, Space Invaders Invincible Collection is an exciting compilation once you get over the sticker shock. The early installments rank among the most influential and easily recognized games of all time, and their follow-ups provide a fun look at how the franchise evolved and responded to shifting industry norms. Hopefully, that's enough to tell you whether you might like to add it to your gaming library, either at full price or if a sale comes along at some point down the road. Personally, I'm glad to have it in mine.

If you enjoyed this Space Invaders: Invincible Collection review, you're encouraged to discuss it with the author and with other members of the site's community. If you don't already have an HonestGamers account, you can sign up for one in a snap. Thank you for reading!

© 1998-2021 HonestGamers
None of the material contained within this site may be reproduced in any conceivable fashion without permission from the author(s) of said material. This site is not sponsored or endorsed by Nintendo, Sega, Sony, Microsoft, or any other such party. Space Invaders: Invincible Collection is a registered trademark of its copyright holder. This site makes no claim to Space Invaders: Invincible Collection, its characters, screenshots, artwork, music, or any intellectual property contained within. Opinions expressed on this site do not necessarily represent the opinion of site staff or sponsors. Staff and freelance reviews are typically written based on time spent with a retail review copy or review key for the game that is provided by its publisher.