As I prepare to write about Akiba's Trip: Hellbound & Debriefed, I have two adjectives in mind. Before I get to those, though, I'd like to explain the game's setup.

Essentially, you run around a digital recreation of Akihabara, tearing clothes off men and women who might be secret vampires called Shadow Souls. Those monsters are sucking blood and turning healthy Japanese young people into shut-ins with no prospects. A secret war is being waged against those who represent the future of the human race, and the bad guys have the edge. But they also turn to ash when exposed to direct sunlight, especially when there's a lot of it all at once. Hence the stripping. If you can disrobe them, they cease to be an issue. Because they are dead. Very, very dead.

Now, about those two adjectives I mentioned... Can you guess what they are? I'll give you a hint. They are "bland" and "tedious." I bet you weren't expecting that, were you? And to be perfectly honest, neither was I. 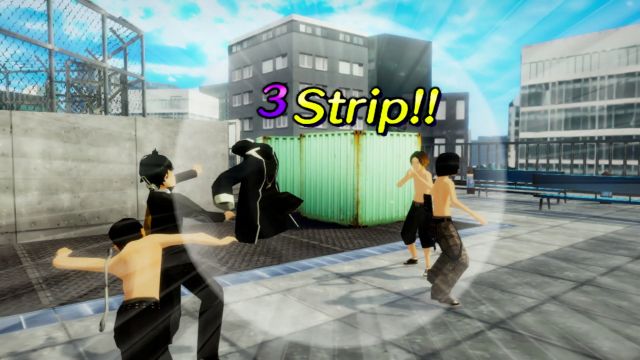 Originally released in 2011 on the PSP, Akiba's Trip was the unlikely start to a franchise that now includes three distinct entries along with some revised editions. It never left Japan, due to bad timing and whatever else, but the game's sequel found international audiences on Vita, PlayStation 3 and PlayStation 4 as Akiba's Trip: Undead & Undressed. Now, we get to see what we've missed. I wholeheartedly welcomed this development, but I do wish the game were better.

Several elements conspire to produce a dreadfully bland experience. The first is that many of the environments look very nearly the same. I'm willing to concede that this is not entirely the developer's fault. If you're paying homage to an iconic piece of Japan, you are constrained somewhat by the reality of that place. But we've seen something like the Yakuza games, which lovingly recreate Japanese environments and make them feel alive, bustling and attractive. I have a hard time playing any game in that other series without wishing I could jump into the world displayed on my screen. In contrast, the Akihabara presented here looks like a collection of cardboard walls with simple textures painted on them. There are a few people wandering around each area, but the characters don't feel especially lifelike and there don't seem to be a lot of unique models.

Shops are presented as a static menu with one of a few stock merchant characters tending the counter. Backdrops are sparse and blurry. This was originally a PSP game, you recall at each turn. It has been touched up, but not enough. From the characters to the environments and everywhere in between, the original simple design shows through with just enough polishing done that for the most part, none of it looks like complete ass. But in my book, that's not enough to warrant a cry of "Kudos!" 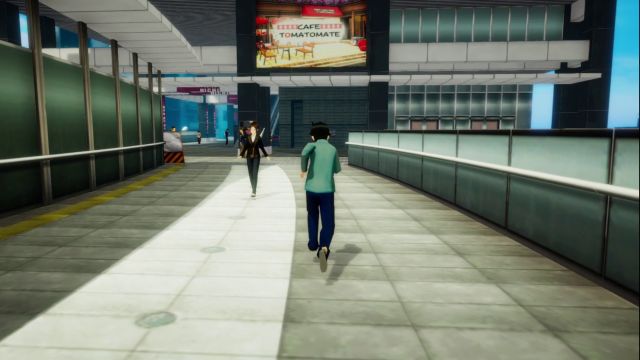 So the whole affair is bland, but that I can live with. Any number of games have released over the years that weren't especially polished where visuals and environments were concerned, yet ultimately they featured an addictive design that prevented the rough edges from mattering much. My chief gripe is that Hellbound & Debriefed simply isn't a lot of fun to play from moment to moment. Its concept is far superior to its execution.

I used the word "tedious," and I hope "annoying" is implied, because both words fit perfectly. The way things work is that you have a home base where you receive new missions that advance the plot. It's located in the back alley in one of the available destinations on your map. Once you have your marching orders, you leave the alley and make your way toward the nearest exit. Along the way, you will probably be accosted by a Shadow Soul, prompting a brawl.

During a brawl, you want to deal enough damage that your foe and their clothes are weakened, providing you with the opportunity to lean in and start tugging aggressively. Rrrrrrrrriiiiiip! Off come the pants, or a shirt, or a visor or whatever else. Assuming your target was in fact a Shadow Soul, you will see pale blue skin. And so you keep going, removing another article or two and sending your foe to the great beyond. At the same time, you want to avoid taking so much damage that you yourself find clothes removed, because at the start of everything, someone sucked your blood and imbued you with some Shadow Soul energy of your own. The sunlight is not your friend. 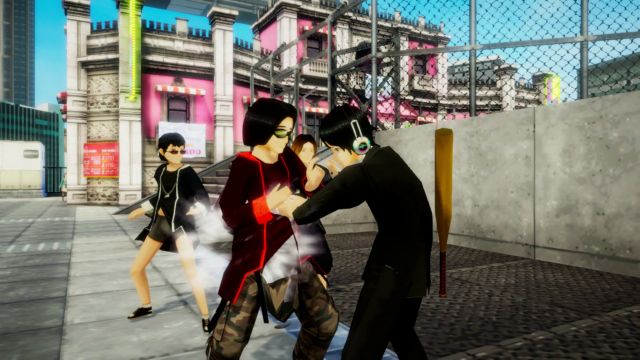 Though this combat system is initially interesting and unique, because it allows you to survive through careful strategy and by dressing yourself in the spiffiest of duds (which you can enhance with items), it tends toward excessively awkward. You can attack at three basic levels: high, middle and low. Also, you can jump. So you have to exchange blows with an opponent and account for blocks and counterattacks. That's all good so far, except the camera likes to get messed up by environments so that you have to move it around manually to see things again. In the meantime, your character likes to punch or kick straight ahead of wherever he is facing and there's no way to lock onto a chosen target. If your opponent moves, or sometimes when another target presents itself, you'll launch attacks at nothing. This tendency exposes you to reprisal, particularly if you get surrounded by several foes.

In some encounters, you might begin fighting a single Shadow Soul, but unless the fight goes swimmingly right from the start, you'll probably extend the area of combat a bit as you exchange kicks and punches. Onlookers then get involved, because you or your opponent may actually strike them, and they take that personally. That adds a few more bodies to the mix. Or another Shadow Soul approaches and joins the fray. Then you might get knocked to the side and exit the area, just before you can collect any rewards for the villains you defeated. Areas are quite small, their edges not clearly marked, so this can happen with some frequency. Another issue is that if your fight takes long at all, a patrolling police officer is likely to come across you and may arrest you right in the middle of a brawl unless you turn tail and run, which may or may not be possible at the moment. Then you have to pay a huge fine that may burn through any money you amassed in your ill-fated career as a street fighter. 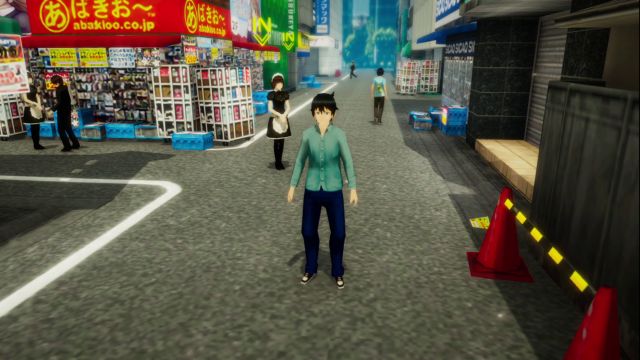 Generally, you are likely to find yourself short on funds unless you're doing a lot of fighting, to amass a pile of gear you can sell for cash or upgrade. There also are side missions, but some of them require you to make large investments. And any new moves you might learn come only after other expensive purchases. The result is that progression involves quite a lot of grinding, in the same few lifeless environments. Then when you're ready to make a purchase you've been saving toward, you have to remember which of the samey streets housed the particular store you meant to visit. Aaargh!

There's a good game hidden in here somewhere, and I'm glad I finally got to experience it, but Akiba's Trip: Hellbound & Debriefed buries too many of its positive attributes under layers of tedium and drapes the whole package in thoroughly underwhelming window dressing. Players shouldn't have to work so hard to wring enjoyment out of an RPG that's all about stripping vampires in Akihabara, even one that's ten years old.

If you enjoyed this Akiba's Trip: Hellbound & Debriefed review, you're encouraged to discuss it with the author and with other members of the site's community. If you don't already have an HonestGamers account, you can sign up for one in a snap. Thank you for reading!

© 1998-2021 HonestGamers
None of the material contained within this site may be reproduced in any conceivable fashion without permission from the author(s) of said material. This site is not sponsored or endorsed by Nintendo, Sega, Sony, Microsoft, or any other such party. Akiba's Trip: Hellbound & Debriefed is a registered trademark of its copyright holder. This site makes no claim to Akiba's Trip: Hellbound & Debriefed, its characters, screenshots, artwork, music, or any intellectual property contained within. Opinions expressed on this site do not necessarily represent the opinion of site staff or sponsors. Staff and freelance reviews are typically written based on time spent with a retail review copy or review key for the game that is provided by its publisher.