Although I wasn't utterly delighted with Mario Calculator, a piece of DSi software that allows gamers to turn their devices into calculators or use them to perform simple but useful conversions, I felt it wasn't completely pointless even now that people have smartphones on their person most of the time. Animal Crossing Calculator, the other entry in Nintendo's series of calculators for that hardware, is similar but not quite as good.

Released in 2009, Animal Crossing Calculator provides players with an extremely basic calculator capable of performing not quite as admirably as the cheapest calculator you're likely to find at your local department store. It can add, subtract, multiply and divide, essentially. As long as you don't try to get it to work with too many zeroes, it'll get the job done.

A secondary but more interesting function is unit conversion. You can take a common number, such as a temperature or the age of an animal, and convert it to a different number that might be relevant to your interests at the time.

Let's say you're in the cereal aisle at the store, and you want to determine the advisability of buying a large box of cereal priced at $5.20, versus a smaller one of the same type of cereal that costs $3.92. Sure, you could just look to the lower left side of the price sticker, which probably converts the price to cost per ounce or similar. But you are feeling independent.

Now, the bigger box probably says something like "1 LB 2 OZ" and the smaller one says "14 OZ," but you can't remember for the life of you how many ounces are in a pound.

No worries! Nintendo has your back!

A few quick taps will tell you that 1 pound is equal to 16 ounces. So the cost per ounce in the larger box of cereal is roughly $0.29. The cost per ounce in the smaller box is roughly $0.28. Buying the larger one doesn't offer actual savings even though it seems like it ought to. You actually spend more by going that route, thanks to differing sale prices.

Difficult though it may be to believe, this sort of tragedy plays out all the time. Mostly, people buying groceries aren't actually paying attention to the price tags as closely as they pretend they are. So it's important to read price stickers closely or, failing that, to pull out a Nintendo DSi with Animal Crossing Calculator installed and do the math yourself. 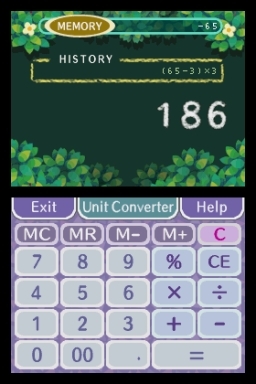 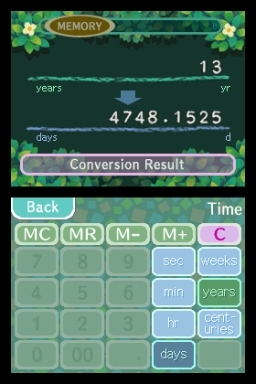 In any case, it's neat that the software will perform extremely simple mathematical operations, and that it lets users convert one number to a different number. That's a good way to while away a few minutes without becoming excessively engaged. Such entertainment has its place. I just wish there were a few more bells in whistles.

In the case of Mario Calculator, Nintendo provided a simple top screen theme that allowed players to move Mario around it. He couldn't do much, it's true, but at least he was there. It felt almost game-like. Not so with Animal Crossing Calculator, which doesn't often look like much of anything but a blackboard surrounded by leaves. I expected to see a member of the Nook family, at least, but the only time you see one is if you perform calculations that add up to a number at least three digits long that consists of all 7s. Then Tom Nook pops up and some balloons float away as a triumphant sound effect plays.

In place of Mario's underground theme, which already felt minimal as it was, Animal Crossing Calculator provides on the top screen the aforementioned static border. There is some very limited animation, such as when you convert units and "Conversion Result" flashes on the screen as an arrow moves ever so slightly, but that's hardly likely to arrest anyone's attention. Interaction is limited to typing numbers or simple commands into the calculator. The only frill, other than infrequent appearances from Tom Nook, is a digitized voice that reads out the numbers 0-9 when you tap them.

It's important to remember, of course, that Animal Crossing Calculator was released during a period in time when smartphones weren't nearly as ubiquitous as they are now, and when any digital software you could download into your gaming device was still something of a novelty. At that time, the application's value was a lot higher than it is in 2021, when a simple Google search brings up the same information without the need to even visit a separate site.

If your goal is to purchase nearly every bit of software still available for Nintendo's portable gaming line while it remains available, I can recommend Animal Crossing Calculator strictly on that basis. People collect stamps, after all, and those aren't really any more useful (except that you can eventually turn around and sell your collection, possibly for a mint). But if you are looking for software you can purchase at a low price and use to amuse yourself for more than seconds or possibly minutes at a time, virtually anything Nintendo offers on its current storefronts will serve you better.

If you enjoyed this Animal Crossing Calculator review, you're encouraged to discuss it with the author and with other members of the site's community. If you don't already have an HonestGamers account, you can sign up for one in a snap. Thank you for reading!

© 1998-2021 HonestGamers
None of the material contained within this site may be reproduced in any conceivable fashion without permission from the author(s) of said material. This site is not sponsored or endorsed by Nintendo, Sega, Sony, Microsoft, or any other such party. Animal Crossing Calculator is a registered trademark of its copyright holder. This site makes no claim to Animal Crossing Calculator, its characters, screenshots, artwork, music, or any intellectual property contained within. Opinions expressed on this site do not necessarily represent the opinion of site staff or sponsors. Staff and freelance reviews are typically written based on time spent with a retail review copy or review key for the game that is provided by its publisher.