What exactly is Alex Kidd in Miracle World?

While some hardcore fans may balk at that question, it's a fair one to ask about a widely unknown side-scrolling platform game that came out several decades ago, on a console that was hugely-overshadowed by Nintendo's 8-bit wonder. Originally released in 1986 on the Sega Master System, Miracle World and, more importantly, its protagonist Alex Kidd, was synonymous with the console; if you mentioned one it was shortly followed by the other, and it didn't hurt that Sega eventually built the game into the consoles. Alex Kidd, the noticeably big-eared practitioner of the Shellcore art, which allows him to break blocks with his fists, won the hearts of many a Master System owner at the time. Subsequently with the help of Sega, he broke their hearts with a series of mostly average-to-terrible sequels before fading into obscurity, only making rare cameos in other games as time passed on.

With people often referring to Miracle World as Sega's response to Super Mario Brothers, one would think this to have a similar structure and formula to the plumber's exploits, right? Not only is it far from that, but it also doesn't flow like a typical side-scrolling platformer. When you begin, you're tasked with vertically hopping down a mountain, which then segues into a brief horizontal underwater section. The second stage is the first time you're traditionally moving right on a normal surface, however it's designed purely so you can purchase a motorcycle and speed through the whole area within seconds, concluding with a boss fight. That's not a usual boss battle, either: Alex engages in a rock-paper-scissors standoff where he must emerge victorious in a best of three. 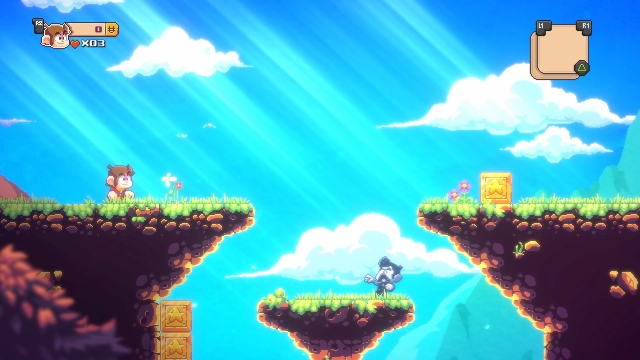 If you haven't realized by now, Alex Kidd in Miracle World is goofy.

For the 2021 release, Alex Kidd in Miracle World DX, the new developers have been given the task of recreating such a world with a modern take, and they've done a commendable job. While updating the graphics, they've decided to maintain a 2D look, albeit with more detail, animation, and personality. Alex Kidd appears energetic and eager for adventure as he travels through locations with layers of atmosphere; in the original for instance, every outdoor stage has a dark blue sky background, but DX has sets such as a dusk backdrop in the first bike stage and rainy weather in a seized town, the latter now accompanied with a downtrodden theme. Taking a page from Lizardcube's tactic with the Dragon's Trap remake, these devs also allow players to switch back and forth between the new and old visuals with the press of a button.

Considering a couple new stages have been added, that's quite the feat since they also had to mimic the original's style with the new content, like the desert location with its cactus enemies and dust devils. All that while repurposing the original visuals into the new screen ratio. There are other minor modifications, like tinkering with certain boss fights to make them seem more like traditional Mega Man-esque battles. There's also quality-of-life changes when it comes to progress: you can continue as many times as you want, flip on infinite lives, or load a current auto save. This is big since the original game kicked you back to the title screen once you lost all lives, with a cheat code being the only proper way to continue. Though if you just want the original title "untouched," a reconstruction is also playable, but only after beating the new version. So the team basically remade the game three times. 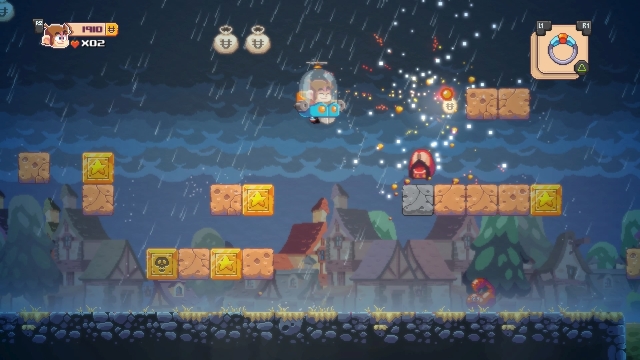 But even with several changes, DX is a faithful recreation of the core, right down to the awkward way secret spots are accessed by "crouching" under blocks. For some that's great news, for others... it's cause for concern. With the core game still intact, there's just some things that stick out way more due to other aspects being fixed, along with stuff that hasn't aged well which was given a hand pass 36 years ago. For example, the game structure and flow. There's nothing wrong with variety when done right, but in Miracle World's case, some of it just feels like lackluster gimmicks being thrown at the player, one after another.

The aforementioned motorcycle segment presents this issue unabashedly, ending within seconds as you plow through block pyramids. However if you decide to go on foot, it becomes dreadfully boring due to repetitively punching through pyramids. You can kinda forgive this since it's early in, but then you realize the game is littered with these short gimmicky stages. They're not terrible, but they're so simple in design that they feel more like bonus stages disguised as standard ones. Normal stages themselves are pretty generic by today's standards, featuring by-the-book structuring, making you hop up and down platforms of varying sizes as enemies casually patrol. Even the new stages have a similar feel to them. The only reason these occasionally offer any "challenge" is thanks in no small part to the slippery movements of Alex; a small nudge forward usually accelerates Kidd, potentially leading to accidental one-hit deaths during vital precision jumping. 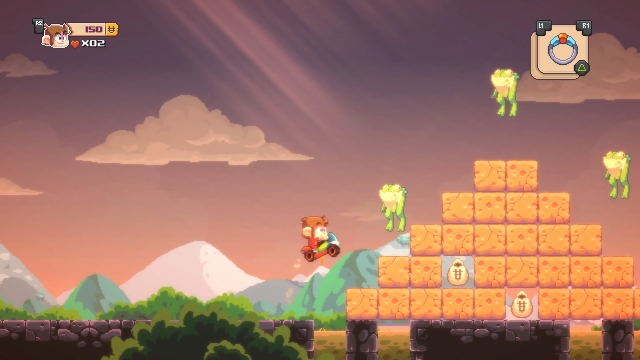 Alex Kidd in Miracle World DX falls into the same awkward situation that Lizardcube's The Dragon's Trap did: the devs did a fine job recreating the game with updated visuals, a reworked soundtrack, and other fresh content while leaving its temple unscathed. Unfortunately, that temple is a bit outdated. If you're approaching purely from a nostalgic perspective, then you'll likely enjoy this product regardless of quality. If that's your path, then it is highly-recommended that you pick up the physical version, because the case's contents are a love letter to the Sega Master System's game box design, right down to the small manual and its six languages. However, if you're essentially looking for a great side-scrolling platformer, this will only provide a minor distraction with its passable game design and cute, colorful presentation.

Hopefully Sega will give this team another chance with Alex Kidd; a brand new title with this type of presentation, one that isn't shackled down by dated design, would be quite the thing to see.

If you enjoyed this Alex Kidd in Miracle World DX review, you're encouraged to discuss it with the author and with other members of the site's community. If you don't already have an HonestGamers account, you can sign up for one in a snap. Thank you for reading!

© 1998-2021 HonestGamers
None of the material contained within this site may be reproduced in any conceivable fashion without permission from the author(s) of said material. This site is not sponsored or endorsed by Nintendo, Sega, Sony, Microsoft, or any other such party. Alex Kidd in Miracle World DX is a registered trademark of its copyright holder. This site makes no claim to Alex Kidd in Miracle World DX, its characters, screenshots, artwork, music, or any intellectual property contained within. Opinions expressed on this site do not necessarily represent the opinion of site staff or sponsors. Staff and freelance reviews are typically written based on time spent with a retail review copy or review key for the game that is provided by its publisher.