To say that Wonder Boy III: The Dragon's Trap was a good Sega Master System game would be undervaluing its contribution to the console; not only did its devs, Westone, show off what the system was capable of with diverse, visually-appealing graphics, but constructed a memorable side-scrolling adventure with an array of distinct concepts. And while commonly compared to its predecessor, due to both using RPG-esque elements, The Dragon's Trap firmly stood on its own foundation, ideas, and style. Journeying back and forth across various, colorful landscapes, players hopped around, sliced foes, and listened to an incredibly catchy soundtrack. Along the way, their eyes were assaulted by big, detailed characters beaming with personality, a cast which included a pirate pig smoking inside a church, a mummy dragon that spat out clovers, and of course, Pimp Skeleton.

The Dragon's Trap was THAT game you showed off when friends came over to play your weird, alien console.

But now that a remake has come out for a new generation to experience, almost 30 years later, does the game still hold up? Or was it just nostalgia? At the very least, the devs of Lizardcube have succeeded in recreating the world of The Dragon's Trap with wonderful, hand-drawn art and animation, making the quest to reclaim the protagonist's human form all the more stunning to stare at. The claustrophobic interior of the starting castle sequence, its corridors adorned with red bricks and dark emptiness filling the outer perimeter, is now a luminous hallway with a drawbridge, knight statues, huge windows, and mist. The entire game is redone in this meticulous manner. The attention to detail is so admirable, that nondescript rooms are given charisma, turning them into such things like a beach shack with a cannon, or the warp rooms now floating in some unworldly dimension. 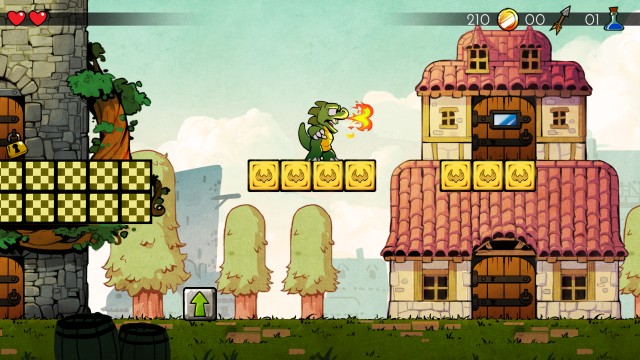 While the game's cast were charming to begin with, the redesigns are really fun to watch in motion; the lion character no longer holds a sword upright, instead dragging it while running, the flower fire-spitter now does a wind-up animation before attacking, and the blue flame after every boss fight now chuckles deviously when it touches you. There's so much interesting stuff happening on screen at any given moment, that I wish the remake had an auto-play feature so I could sit back and appreciate everything. The soundtrack has even been completely remade using actual musical instruments, including violins, flutes, guitars, and hell, some occasional humming. Its ambient, classical contribution, along with the visual presentation, really goes a long way in making The Dragon's Trap seem like a storybook experience, with the controller as your page-turner.

Design-wise, the game is virtually unchanged, so much so, that you can easily switch between the updated style and the classic look without pausing the action. Keeping the structure unchanged doesn't sound bad, but it does present a missed opportunity. The Dragon's Trap might have been a juggernaut on the Sega Master System when it first came out, but try playing it now, decades later in the medium's current climate, and it can easily be perceived as a basic action-platformer with exploration elements. More times than not, once you know the next destination, the game puts you on a very linear path where you hack and slash enemies until a boss is reached.

But giving credit where it's due, The Dragon's Trap does impose a challenge, since you're required to get up close and personal with a lot of enemies just to defeat them. This can be tough, since the rogues gallery consist of opponents with haphazard patterns; bats move in a lax, u-shaped formation, ground monsters spring up, shoot fireballs, and quickly flop into the floor without hesitation, and samurai hop back when you attack, where you then have to quickly run up to them again before being struck by a spreadshot assault. Precision is vital with a lot of enemies, especially since bumping into them take off more health than being attacked, even after upgrading your armor and shield defenses.

Though, this itself becomes an issue, because there's not even a lot of it to go around in a game that can be completed in three to four hours on the first playthrough, and under two in subsequent sessions. The lack of variation in a short game makes the other, smaller flaws more noticeable, like how ridiculously easy it is to defeat most of the six bosses. It's goofy how much effort is needed to dodge and tear down the penultimate boss, then when you reach the climatic boss... it doesn't feel climatic. Also, The Dragon's Trap's central gimmick, one where you possess five animal forms with unique abilities, feels like an afterthought. The mouse's ability to stick itself to specific blocks, at any angle, is criminally underused, where you spend this form's main location simply climbing up and down pillars. What's the lion's ability? Sw... swings a sword broader than the other forms.

Lizardcube did make some modifications here and there, and while they sound insignificant, I do like the changes. The screen being wider means it's easier to counter fast enemies or projectiles coming from off screen, a nuisance in the original game. When entering shops, you're now given descriptions and strength power of swords, shields, and armors before purchasing them, along with knowing certain items' special abilities. The asinine charm stone system, demanding you grind for rare stone drops (grinding for coins isn't enough?) just to buy specific items, has now been reworked and "minimized" in the remake. The devs also did something, in my opinion, fiendishly adorable for the hard difficulty setting: the hourglass timer from the second Wonder Boy game, which slowly drains your health, makes a return. So, then, in what other way could Lizardcube have made any major changes without touching the core game? Well, the new charm stone system actually answered that question. Instead of grinding endlessly for stone drops, the developers instead scaled it back to searching for just six stones. To obtain these, players must find six hidden passages throughout the game's world, which leads them to obstacle courses. Made exclusively for this remake, the six courses put the protagonist's six forms through some grueling, creative challenges, ranging from tricky platform jumping to very awkward enemy placement. There's even one obstacle that requires dodging breakable blocks in a spring-jump arena, because you eventually need them to reach the exit. Really would have been great if this was its own separate mode, with an additional 15 to 30 challenges to fight through.

It's not a bad game. All the things you heard, if any, about The Dragon's Trap being an awesome piece of software wasn't hyperbole; it really was something special when it first came out on the Sega Master System. It's just the passage of time and improvements in the "platform-adventure" genre made some of the game's aspects seem oddly executed in retrospect. But the fact that it still manages to be, despite its flaws, a competently-structured experience after all these years is commendable. And Lizardcube should be lauded for their dedication to the project, going the distance by heightening the game's atmosphere, transforming the cute, colorful journey into a whimsical wonder tale.

If you don't mind The Dragon's Trap's short length and "basic" action, then have fun with this visually-pleasing, sweet-sounding adventure; as long as you're aware the bliss is brief and you're left wanting much, much more.

© 1998-2021 HonestGamers
None of the material contained within this site may be reproduced in any conceivable fashion without permission from the author(s) of said material. This site is not sponsored or endorsed by Nintendo, Sega, Sony, Microsoft, or any other such party. Wonder Boy: The Dragon's Trap is a registered trademark of its copyright holder. This site makes no claim to Wonder Boy: The Dragon's Trap, its characters, screenshots, artwork, music, or any intellectual property contained within. Opinions expressed on this site do not necessarily represent the opinion of site staff or sponsors. Staff and freelance reviews are typically written based on time spent with a retail review copy or review key for the game that is provided by its publisher.