I confess that my initial reactions to Pikmin 3 DX were negative. Part of that is due to muscle memory, trying to play the game like it was the original back on the Gamecube. Part of it was my frustration with the format. But part of it was Nintendo babying me. Turns out that when porting the game to the Switch, they decided to rename "Easy" mode to "Normal" (and Normal to Hard, naturally), and nobody told me. So here I was, playing through the game, and wondering why it was so much easier than I remember. So word of advice: if you buy this game and don't want to be babied, play on hard. And that's important advice, because this is still worth playing.

Yes, despite my initial negative impressions, there is still fun to be had here. Pikmin is a single player (or co-op) real-time strategy-esque game with a very Nintendo twist. Rather than a distant, omniscient general, you play as a 2-inch tall alien stranded on a hostile world that just happens to look like ours, but guiding weird little plant-bug-carrot-things called Pikmin to aid you in your quest. The world is filled with wildlife that will eat or smash these Pikmin, but under your guidance you can organize them to slaughter the wildlife instead. Well, organize them or just throw them at your foes, whichever you prefer. Do this, and you can carry their corpses back to your base and use them as food to sprout new Pikmin to add to your army. With five different types of Pikmin, each with different abilities (yellow are immune to electricity and can be thrown higher, pink can fly but are weak, etc), you have to be sure to choose the right Pikmin for the job and to build up an army of each one. Oh, and make sure you herd them all safely back to base by the end of the day, for leaving them behind is a death sentence. Despite it's cutesy exterior, it sure seems kinda dark, doesn't it? 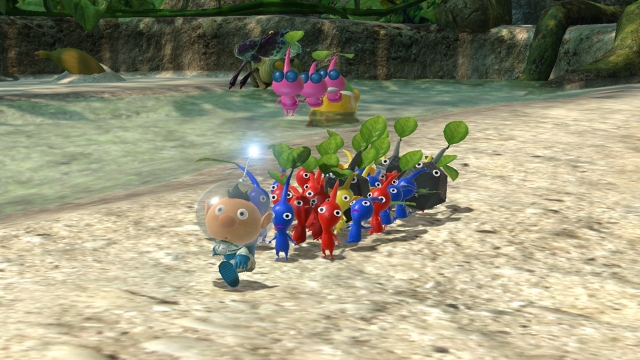 But while growing Pikmin and committing genocide on the local spiders and ladybugs may be fun, it's not your primary goal. Instead, you are hunting for fruit to feed your starving planet, but get a bit sidetracked when your ship kinda crashes and causes the crew to be scattered. So goal number 1 is fixing the ship, while grabbing fruit is secondary. In fact, the fruit acts as a timer, as it is your only food supply, and running out means game over (don't worry, you have to be deliberately awful in order to run out...). Recovering your crew means that you have multiple leaders that you can switch back and forth between at the press of a button or two, giving you more freedom to multitask. And in order to get those fruits and ship parts, you will need to clear the path of all baddies, knock down walls, build bridges, push boxes out of the way, and all sorts of little tasks. So multitasking is the name of the game with all these issues to solve as you make your way to the next story beat, all while the sun is slowly setting.

It's a great setup, but to be honest, the main story mode didn't grab me as much as I thought it would. Pikmin 1 was extremely non-linear, tossing you into a large area with ship parts scattered about that you need to find and bring back. Pikmin 2 was extremely linear, making you go into caves to dig up treasure. This tries to be a hybrid, giving you the fruit lying about like the first Pikmin but always stringing you along with a new mission in a linear fashion like the second. Unfortunately, that stringing along bit means that parts of the game slowly unlock (you don't get blue Pikmin until nearly the end of the game!), making the entire game feel almost like an extended tutorial. Seriously, it was honestly shocking to me when I killed the second boss and realized I was actually in the main game and NOT still in the introduction. These were never long games, but it felt somewhat empty when I am simply doing what Nintendo wants me to do rather than planning out my day and grabbing what I want. Couple that with the fact that I was accidentally playing on Baby mode thanks to Nintendo redefining their challenge levels, and I was starting to wonder if the first Pikmin was just a lucky aberration in the series. Sure, one of those problems is easily fixed by changing the difficulty, but I definitely would have preferred a more open experience overall. And it's not like the main quest wasn't fun, but it did feel less fulfilling than I would have expected.

Ah, but then there are the missions. Besides repeating boss fights (yawn), you instead are dumped onto minimaps with a certain number of Pikmin and told to collect as much fruit or kill as many enemies as possible within a single day. Grabbing all of them will require knowing how many Pikmin of each type to perform each task, when to perform each task, and how much time to spend on building up your Pikmin forces when you only have one day to complete everything. It's extremely daunting, not to get a passing grade (that's pretty easy), but to get the highest medal. You will be ordering one group to one location (you can do that on the map and they will automatically go there), take control of another group to set them on an automated task (like knocking down a wall), and then quickly take control of the third group to perform tasks you need to watch over like killing the bugs. All while a mental timer is going down in your head, telling you when you should switch back to a different group to set them on the next path. It's an intricate puzzle that requires careful planning and adjustments on the fly. One time I foolishly let a giant spider squash a Pikmin holding a bomb, causing it to explode and decimating my troops. Needless to say I didn't get a great medal that time, but salvaging what I could from such a setback was still an accomplishment in my mind.

Everything that bugged me from the main story mode was gone once I started trying these out. Sure, these missions are easy to complete, but plenty challenging to master. The tutorial-like atmosphere was long gone, replaced with the open atmosphere I craved for. Instead of a series of simple tasks that can be completed without thinking about it, figuring out the optimal way to complete all these tasks simultaneously is critical. And instead of a short experience that feels like it's over way too quickly, there's 15 missions each for the "collect all treasure" and "kill all enemies" missions, which means 30 days in total (not counting all the times you will repeat!). And while I didn't play it, I should also note that there's a cool multiplayer "Bingo" mode, where you are competing with another player to fill in a Bingo card with various tasks such as kill a specific enemy or whatnot. Pikmin is at its best when it is a management/strategy game, in which you are tasked with prioritizing multiple tasks and finding the optimal order to tackle them, and we see that bloom here.

It's a strange situation, when the meat of a game provides a disappointing experience, but the extras are still fantastic. The Pikmin concept is so unique, but bringing the elements out one at a time as is done in the story mode ruins the fun. Couple that with the Normal mode being too easy, and it felt like a facsimile of Pikmin rather than the real thing. But that feeling of trying to do a dozen things at once, of planning out your day and executing it to perfection (or of failing to execute and coming up with a Plan B on the fly), of feeling a sense of accomplishment when that last piece of treasure makes it to your spaceship as the sun is setting does still exist in the side missions. I wish the meat was more filling, but the meal still ended up satisfying.

If you enjoyed this Pikmin 3 Deluxe review, you're encouraged to discuss it with the author and with other members of the site's community. If you don't already have an HonestGamers account, you can sign up for one in a snap. Thank you for reading!

© 1998-2021 HonestGamers
None of the material contained within this site may be reproduced in any conceivable fashion without permission from the author(s) of said material. This site is not sponsored or endorsed by Nintendo, Sega, Sony, Microsoft, or any other such party. Pikmin 3 Deluxe is a registered trademark of its copyright holder. This site makes no claim to Pikmin 3 Deluxe, its characters, screenshots, artwork, music, or any intellectual property contained within. Opinions expressed on this site do not necessarily represent the opinion of site staff or sponsors. Staff and freelance reviews are typically written based on time spent with a retail review copy or review key for the game that is provided by its publisher.