Right now, the temperature in the generally mild Pacific Northwest is 106 Fahrenheit (that's 41 Celsius) and predicted to reach 111 within the next couple of hours or so. I really ought to be playing and reviewing one of several massive games in my queue, but all I feel like doing is parking myself in front of a fan and wishing I had an air conditioning unit. Wishing gets old eventually, so for entertainment during these unusually hot days I needed lighter fare than usual. I needed something like Manic Hyena's recent Switch release, Summer Paws.

The idea behind Summer Paws, as near as I can tell, is that you don't like how cats get to sleep most of the time. So you've set about waking up every cat across 18 tropical isles. You accomplish this task by panning a camera across various environments until you find a slumbering feline, then moving the cursor over them and engaging. The cat will wake up, a meter will partially fill, and then you search some more. Once you have located enough of the creatures, along with bonus items, you can progress to the next isle and repeat the process. Or if you prefer, you can stick around to make sure you leave no stone unturned before you you advance.

Accompanying your search are 24 musical tracks from Kevin MacLeod, a composer known for making various royalty-free compositions available to fuel creative projects such as films and video games. It turns out he has put together a lot of tracks, and the ones selected for use in Summer Paws are a terrific. They make for soothing background music as you scan the environment in search of your unsuspecting targets. 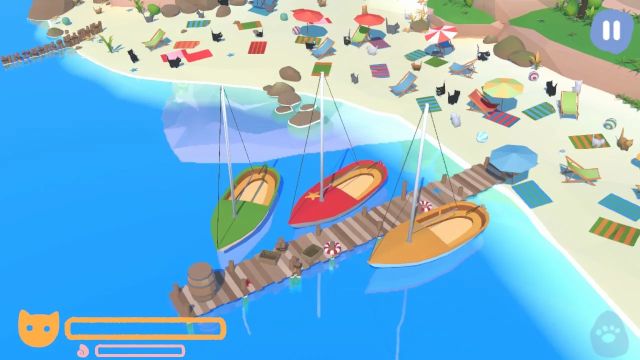 The visual style is similarly pleasant, with a minimalist approach that works beautifully to bring the isles to life. Some developers might have gone with voxels like in Minecraft, but I like what you get here a lot more. The architecture looks almost like it belongs in the pages of a child's storybook, and so do the cats. They wear hats and tops and occasionally even sunglasses, which makes them surprisingly endearing. I really can't fault any of it.

The camera is less brilliant, but I can only complain so much because certainly it gets the job done. The environments are necessarily cluttered, with bell towers and stone arches and bridges and houses and docks that give the cats places to hide, but usually it's not much trouble to get a clear view or to pan over things. Sometimes the taller trees do get in the way, and I would have liked it if I could bring the camera a bit lower to the ground. In the more sprawling environments, some of the detail can also be difficult to make out, because the camera holds back a bit further than ideal. But all of these complaints sound worse in print than they are in practice.

Besides finding obvious cats that are just blending into the environment (you may be surprised how well they do that; it's easy to pan right past a cat without noticing it if you're not alert), you will also need to solve very basic puzzles. For instance, a building's door might be locked. That's a good sign a cat is hiding behind it, but you'll need to flip switches to free the latch. Or there are statues in ruins and you have to rotate them certain directions to activate a dais. It's very basic stuff but, along with the trunks you can open and so forth, the little bit of interaction helps the setting feel more alive. 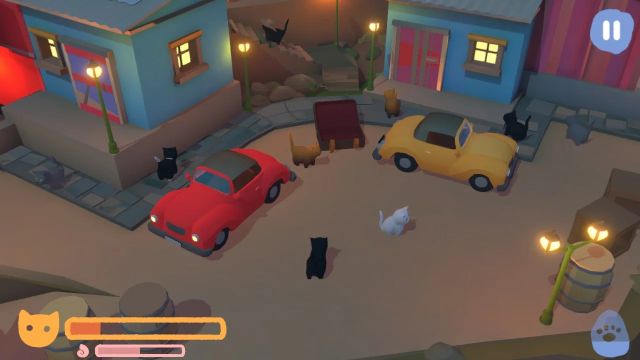 Happily, the game also contains enough content to keep most casual players busy for probably a few laid-back hours, if my own experience is any indication. Most stages have at least a few deviously obscured cats, and the visual design perfectly prevents most things from popping out at you, so that you have to look closely as if searching for Waldo in a crowd. It feels good to find a cat that was giving you fits for a few minutes, and that sense of accomplishment may inspire you to try to find every last one. If you finally get frustrated, you can save your progress and return later. I just wish it were easier to choose a different location without exiting out to the main menu, but load times aren't a huge issue.

Available at a budget price, Summer Paws seems to have been designed for a broad audience of casual gamers. I don't always fit in that demographic, but sometimes everyone needs to just chill and the game is a terrific option for such moments. I didn't stop playing until I had found every last cat, a process that helped me pass several enjoyable and generally relaxing hours. If you love cats or just need to wind down in general, definitely give this one a try.

If you enjoyed this Summer Paws review, you're encouraged to discuss it with the author and with other members of the site's community. If you don't already have an HonestGamers account, you can sign up for one in a snap. Thank you for reading!

© 1998-2021 HonestGamers
None of the material contained within this site may be reproduced in any conceivable fashion without permission from the author(s) of said material. This site is not sponsored or endorsed by Nintendo, Sega, Sony, Microsoft, or any other such party. Summer Paws is a registered trademark of its copyright holder. This site makes no claim to Summer Paws, its characters, screenshots, artwork, music, or any intellectual property contained within. Opinions expressed on this site do not necessarily represent the opinion of site staff or sponsors. Staff and freelance reviews are typically written based on time spent with a retail review copy or review key for the game that is provided by its publisher.